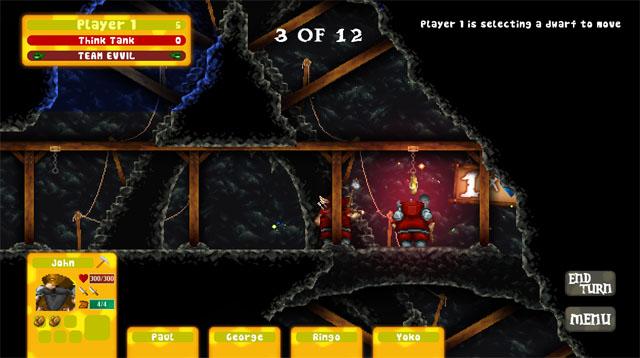 The King of Dwarfs is a rather egotistical so-and-so, sending his minions down into the depths of the earth to bring him back precious minerals and treasures, without even a second thought as to the horror they may face. Fortunately for us, his selfish ways have spawned Delve Deeper, a lovely turn-based strategy title for both single and multiplayer fun. With stylish pixel-art graphics and humorous dialogue, this unique offering is well worthy of your time.

Taking control of a team of dwarven adventurers, your task is to create underground pathways for your troupe to traverse, digging valuable gems and grabbing ancient relics as they go. Other teams are also delving into the mountainside, and you each take it in turns to direct your dwarfs and dig your tunnels.

Each turn starts with the placement of a tunnel piece, which must connect to your previous caverns – or even your enemies’ caverns, if you’re feeling strategic. Your men can then be selected and told where to move, dependent on how many travel points they have. Once a dwarf has reached his destination, he’ll dig any minerals or grab any relics that happen to be in that spot.

Once a dwarf has filled his pack with spoils, he must then return to the drop-off point and unload, earning your team points. More points are awarded for gems found deep down in the mines, while relics and treasures have random values, and can even cost points if you’ve managed to grab a bad ‘un.

This all sounds relatively simple, until you take into account the monsters of the depths and the other dwarf teams. Evil creatures spring up out of darkness and hunt down your dwarfs, potentially knocking them unconscious for a round of play and generally causing havoc. Combat is your regular RPG turn-based affair, but is entirely automatically. The winner usually depends on how tough the creature is, and how many of them attack at once. 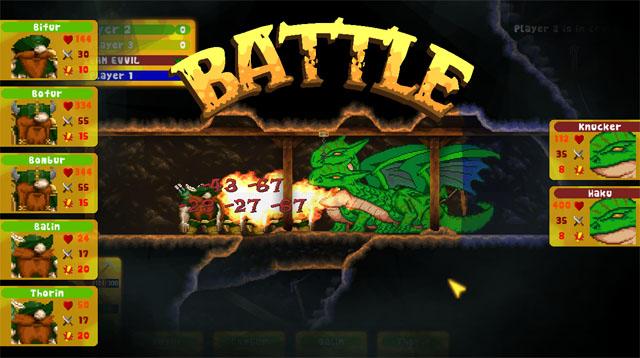 Besides these nasties, opponent teams can also connect their mines up to yours and enter your tunnels, doing battle with your team and hindering your progress. The key to accumulating the most points is a good balance between digging for treasure and keeping your enemies at bay.

Initially the controls feel a little complicated, but a witty tutorial from the King of Dwarfs himself will soon have you plundering the depths of the mines. The game mechanics are simple to understand, but require careful consideration if you plan on taking home the most points.

Apart from the unique concept, Delve Deeper features some lovely customization and personality. Players can choose their team of five, opting for a mixture of the miner, the warrior and the scout who each have their own stats and abilities.

The lovingly crafted art style throughout means the action is always a joy to behold, from the dwarfs slogging away at their work to the simple yet effective battle scenes. There are some great sound effects too, with dwarven yelps and dragon roars a common ear-pleaser. 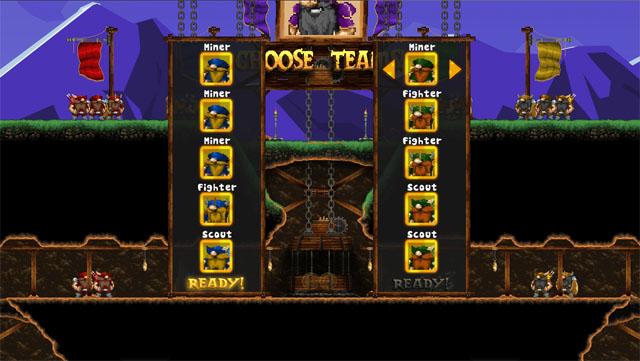 Up to four players can dig for victory on one computer, but for those looking to play alone, the AI-controlled opponents are a decent challenge. The AI teams can prove rather clever and ruthless, although having to watch each of their turns one by one can be a little boring.

It would have been nice to have some sort of main story mode to accompany the single battle mode, but even without this Delve Deeper is highly enjoyable, even if you aren’t a huge fan of strategy games – and with such a modest price tag, this really is one experience you should look into.

For those not fully convinced, there is a demo available for download.