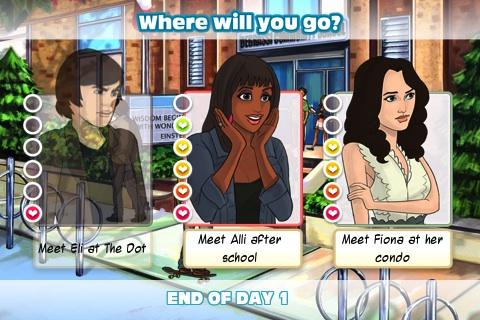 High school is full of drama, and Degrassi proves that makes for a great visual novel

Ah, Degrassi. For three decades the show has managed to capture the essence of that most dramatic of life’s stages: high school. While we’ve been content to simply watch the drama unfold in the fictional Toronto high school up until now, the simply titled Degrassi visual novel lets you get involved. Though the first episode is relatively short, the writing is sharp and it practically forces you to replay it several times in order to see everything.

The game plays out much like Cause of Death: Can You Catch the Killer or the Vera Blanc series. So that means, for the most part, you’re simply along for the ride, reading dialog until the time comes for you to make a choice. And it’s those choices that affect how the story unfolds. The first episode (a total of six episodes are planned, to be released on a monthly basis) puts you in the shoes of a new kid at Degrassi, looking to make some new friends in the midst of carnival season. Yup, that’s right, a carnival.

Episode one spans the first few days of a new semester at school, and though you’ll meet a number of characters along the way, it deals primarily with three students from the TV show: Alli, Eli, and Fiona. You can attempt to befriend each, but the twist lies in the fact that you simply don’t have time for them all. You’ll need to make tough choices. While one character can ultimately become your friend, in order for that to happen you’ll need to turn down the others. But since the episode is so short, lasting roughly one hour, this means that you’ll likely want to play through the game multiple times to see what happens based on different actions.

The choose-your-own-adventure-style gameplay isn’t groundbreaking by any means, but it’s buoyed by solid and witty writing. It really feels like you’re stuck in an episode of the show, though it is a bit strange that your character behaves exactly the same whether you choose a male or female avatar. That aside, the story is classic Degrassi, and the characters behave true to form. The game is also padded out a bit with the inclusion of mini-games, though these feel out of place and, for the most part, aren’t particularly fun. 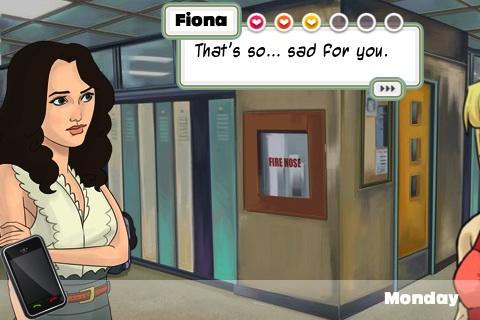 With a great cartoon style, Degrassi also looks the part. Though the characters are all stylized versions of real actors, they’re instantly recognizable. Your avatar, meanwhile, can be customized in a number of ways, letting you choose from a variety of hairstyles, skin tones, and looks, not to mention the option to play as either a male or female.

While the first episode may be short, Degrassi manages to make up for its length with great writing and solid replayability. It’s the kind of game you can enjoy whether or not you’re a fan of the show. That said, if you are a Degrassi fan, the game is a virtual no-brainer, especially if the later episodes continue along in the same vein as the first. High school is full of drama, and Degrassi proves that makes for a great visual novel.