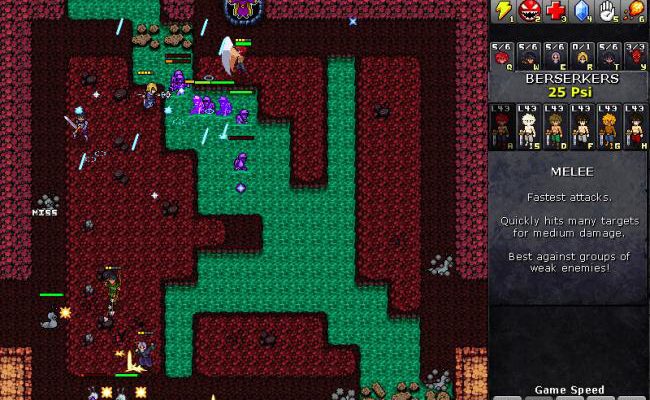 The tower defense-RPG hybrid Defender’s Quest: Valley of the Forgotten is one of those rare games that gets everything right.

Defender’s Quest opens on a rather bleak note. After falling victim to a ravenous plague, you’re tossed into the Great Pit even before you’ve drawn your last breath, but you somehow recover and discover within yourself the ability to travel to the world between life and death. Unfortunately, that brings you into contact with the zombie-like Revenants, who prey on the living and cannot be stopped from within the mortal realm. In spite of the dark subject matter, it’s actually a rather funny game, particularly in moments involving the first barbarian you meet, who’s handy in a fight but more than a little bit crazy.

The “towers” in this tower defense game are actually the characters in your party, which can grow into a small army in relatively short order. Like other such games, different types of units – which is to say, different classes of characters – have different abilities: berserkers can deal out tremendous amounts of short-range melee damage, rangers fire arrows from long distances, healers do their best to keep everyone in the fight, and so forth. You place your compatriots along the paths of the incoming enemies and then hope they’ve got what it takes to cut down the attackers before they get to you. 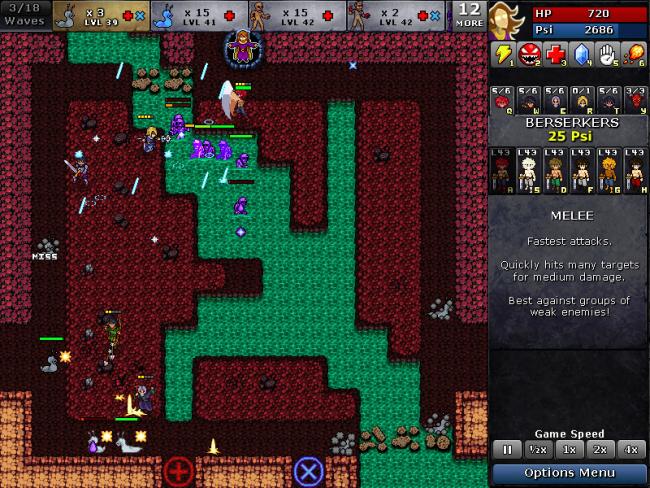 What makes Defender’s Quest different is that they behave very much as traditional RPG characters. They earn experience, level up, gain skills and traits, and can purchase and equip weapons and armor found on the battlefield or purchased from one of the various towns in the Pit (it’s a big pit). There’s even a story, and no small amount of amusing, engaging dialog between levels, too. It’s a bit jarring at times because your character essentially plays a straight woman for the bizarre cast that joins you on your journey, but the dialog is so quick and light-hearted and the characters so consistent that it’s almost irresistibly charming.

Your abilities are powered by “psi,” a kind of mental energy that allows you to pull others into the spirit world with you, boost their skills and even cast offensive and defensive spells of your own. The more powerful you become, the more psi you have to work with; killing enemies recharges your psi pool, albeit at a slow rate, and you can recover some of the energy spent on placing party members by removing them from the field, although normally at a greatly reduced amount. This gives you the ability to reconfigure your defenses as needed, but only if you have enough psi points in reserve.

The action unfolds across a large world map filled with numerous battle points and occasional towns and other points of interest where you can purchase supplies and hire new party members. It’s a completely linear journey from point A to point B to point C, but you can travel back to any previous encounter whenever you want to build up your experience points, earn the “scrap” that serves as the in-game currency and lay your hands on the special items that are rewarded for beating battles at the “extreme” difficulty. Each battle can be fought at one of four difficulty levels, ranging from “casual” to “extreme,” and the top difficulty level is not something to be taken lightly; I didn’t claim my first “extreme” victory until after I’d finished nine battles at the “normal” level. 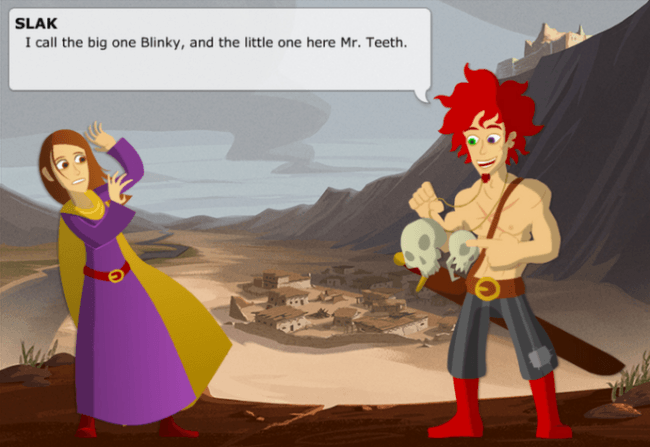 The game is entirely mouse-driven, but most commands can be entered directly via customizable keyboard controls, allowing serious strategists to rattle off orders at a rapid pace. At the other end of the scale, experience and scrap rewards and penalties can be adjusted up or down to open Defender’s Quest up to gamers who aren’t interested in a hardcore tower defense challenge. Character names can be changed to create a more personalized party, and skill points can be reset and redistributed at will if you don’t like how one of your cohorts is working out.

The graphics are low resolution but still quite attractive in that retro-gaming way, and the hand-drawn interludes between battles are simplistic but surprisingly expressive. Sound effects are minimal, but the music is outstanding. The resolution settings are a bit odd, though, as the game has to be “scaled” to full screen on higher-resolution monitors, and there appears to be a minor glitch in the character skill tree where certain aspects of skills aren’t explained as it seems that they should be. But complaining about that is like complaining that they misspelled the gaffer’s last name in the credits for Casablanca.

By any measure, Defender’s Quest: Valley of the Forgotten is absolutely outstanding. If you like tower defense games, go buy it, and if you don’t, try the demo first and then buy it. It’ll make a believer out of you. It really is that good.