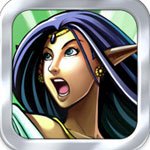 Let’s be honest about something: tower defense games on the iPhone are a dime a dozen these days. The big problem is that, by now, there are a ton of really good entries in the genre, which means that it’s increasingly difficult to create a tower defense game that actually stands out from the pack. Thankfully, Chillingo’s Defender Chronicles: Legend of the Desert King manages to not only stand out, but also maintain a sense of challenge while staying fun.
The story in the game is actually pretty epic: a fantasy kingdom is being invaded and it’s up to the player to assume the role of a heroic general who happens to be the only person capable of defending the land. There’s a rather detailed plot that unfolds via fully-voiced narrative sequences between levels; unfortunately, the quality of the character’s voice-acting is fairly mixed. Thankfully, the plot isn’t actually crucial to the gameplay, and you can easily skip through these sequences if you start getting bored.
As opposed to most other tower defense titles, Defender Chronicles is presented from a 2-D sideview, much like what’s used in platforming games, as opposed to a top-down perspective. As a result, enemies ascend and/or descend a series of paths that eventually lead to a gate guarded by a special hero who serves as a sort of final guard against enemies. Players can place guild posts at specified points on the paths to take out advancing enemies, and survival depends on smart placement and astute use of gold to level-up and advance these guilds into more powerful incarnations, such as fighters to berserkers and archers to rangers.
The other key difference with this game, though, is that it incorporates a number of role-playing elements into its gameplay. The general continues to level up as players conquer new levels (as well as go back and replay old ones), which allows them to acquire skill points that are used to boost troops’ statistics. Meanwhile, conquering levels rewards players with tokens that they can spend on either new inventory items for their heroes or unlockable items, abilities, and secrets. As a result, there’s a high degree of replay value because tokens are awarded even when you beat a level you’ve already triumphed over before.
Of course, there are also a number of different modes in Defender Chronicles: aside from the default story campaign, there’s also an endless game mode, and two modes that get rid of all the RPG elements like bonus abilities and inventory items.
The graphics in Defender Chronicles, meanwhile, are pretty impressive. The colors and character design are decidedly cartoony, which seems like a risky style to go with based on the overly-serious nature of the game’s story. However, it does work, and it works really well in this case. The sprites are surprisingly detailed, too, and everything looks great on the iPhone’s screen.
Now, the one thing that will drive a lot of players nuts is the fact that the game limits guild placement to specific sites throughout a map. While most tower defense titles actually limit your unit placement to certain patches of land, specifying exact spots leads to a lot of frustration because it limits deployment options. At the same time, this makes levels a lot more challenging to play through, so it probably is a safe bet to assume that hardcore tower defense gamers will love it.
Overall, Defender Chronicles: Legend of the Desert King is one of those tower defense games that strives to spin an overpopulated genre on its head through innovative gameplay instead of cheap gimmicks. By and large, it manages to succeed at this, but some of its elements might alienate gamers who are looking for something a bit less in-depth.