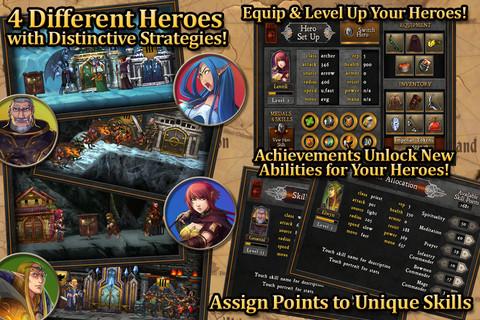 There is one thing that seems to be happening perpetually in the world of iOS gaming: towers are regularly under attack. Sadly with the consistent bombardment on virtual buildings, the genre of tower defense is easily overwhelmed as gamers try to fight off terrible titles.

Back in 2009, Defender Chronicles cut through the cloud of “meh” that hovers above the genre and presented an actual unique and in-depth offering that would keep players tapping to stop invaders. Can the capture the magic again in Defender Chronicles II: Heroes of Athelia?

The first thing players of the original title in the series will recognize is, well, pretty much everything. The story picks up where it left off with Melwin and the General–but you really don’t need to know that to play and enjoy the game.

Taking up arms, you’ll lead your armies of knights and archers into battle on the vertical planes of attack that your enemy will take. Units are upgradable and can be placed in many locales across the map to set up traps for oncoming baddies. It’s all pretty standard stuff as far as the genre goes.

What sets this game apart, and what set it apart in the initial incarnation, is the ability to customize and upgrade a hero that helps in the fight. You’ll take on the campaign with one of four heroes, all of which have some special powers that will help you greatly in the heat of an especially intense battle.

The character is also customizable and upgradable, with the ability to purchase upgrades and equipment that will deck out its stat sheet. This little addition adds a fair amount of depth to the game, and you can really strategize how to best implement your hero against the swarms.

The other factor that really gives Defender Chronicles II a unique spin on the tower defense series is the parallel playing fields that rise up across the screen. Enemies can come up and go down, and you’ll have to keep defenses on all levels to best fight off your enemies. This is the source of pretty frustrating level management, but it’s also a great feeling of accomplishment when your plans work out.

The problem with these great features and genre innovations is that they were all there in the last Defender Chronicles title. Nothing really changed as far as gameplay goes. It would feel a little more like a map pack than a full-on title if it weren’t for the amazing graphics upgrade. 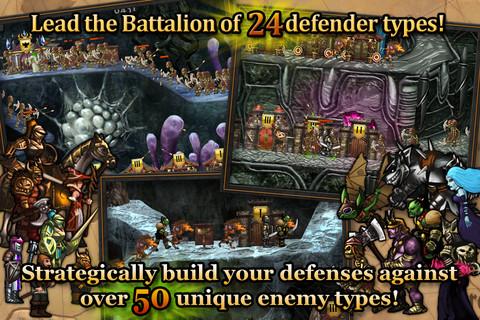 The visuals are full of extremely rich colors and textures. The game is quite the spectacle, especially with smooth animations taking place right on top of some fantastically designed backgrounds. You can zoom out or in on the battlefield, and no matter how you choose to see the fight you’ll enjoy the view.

So while not a whole lot has changed in terms of actual gameplay, it’s almost kind of excusable. The first title did the majority of the alternations to the tower defense formula, and no one has really touched that forumula since then. Besides, that original gameplay is still really good.

It can get a little tedious and even a bit irritating sometimes, but that’s the curse of a challenging game built off a model of repetitious battles. You’re going to have to do some levels over and adjust strategically. There’s a lot of gameplay here, if partially because of the difficulty, but it’s fun nearly every time. 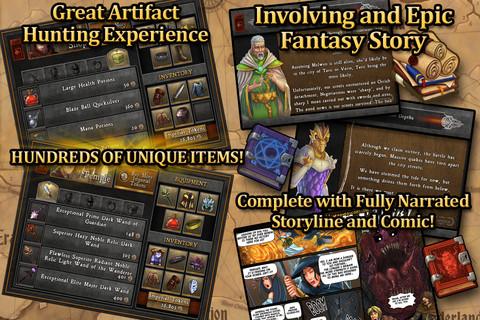 While Defender Chronicles II isn’t the most original installment into the tower defense series, it’s only because it was beat to the punch by its own predecessor. Here’s the win-win that the game has created for itself: People that missed the first title will get their hands on this and find it to be extremely unique, and people that loved Defender Chronicles for being great in 2009 will get more of what they liked.

It’s one of the few occasions that a sequel just being more of the same, save for the huge graphical improvements, works to its advantage. It’ll be the only tower defense title that you need once you play it.