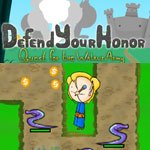 Being an elf without a fairy is an embarrassing situation. How can you earn the respect of your peers? How can you prove that you’re just as much an elf as the next guy? By going on a quest for the king, that’s how! Defend Your Honor is a quirky new tower defense game that sets you on a quest to find the Golden Walrus, but not before it makes a few neat tweaks to the genre.

A tower defense game, for those of you new to the term, is a form of strategy game that puts you in command of an army comprised of troops or combat towers. You’ll need to set these units up in the best places to defend the map from wave after wave of villain. You’ll never actually be in control of these units – just where you place them. You can build, upgrade, and destroy your units at will. Defend Your Honor, however, offers a unique twist that we haven’t seen in other tower defense titles to date.

Rather than spending your funds on new units during play, you’ll stock up on units between games. This means you’ll start every map with the same number of units that you’ll finish with. As the round progresses you’ll be able to upgrade these units, but overspend on upgrades and you won’t have the funds needed to buy new units before the next map. In a genre that’s heavily dependent on buying units on the fly, taking that option away really forces you to rethink the way you’ll play the game.

It was also refreshing to see that, unlike most TD games, Defend Your Honor attempted to tie each of the maps together with a loose storyline. The maps themselves weren’t tied to any plot points, but it was still nice to see a tower defense game try and grow out of its traditionally non-narrative roots. A shame though, the story itself is fairly uninspired. While intentionally light and simple, it seemed to fall short of the tongue-in-cheek humor it was trying to capture.

We found the challenge in Defend Your Honor to be about as lacking as the story elements. While the game throws a variety of enemies at you, many of them feel like reskinned versions of the same enemy. Even when they don’t, your units can overpower just about anything the game throws at you. It didn’t matter if I was facing a wave of fast snakes or slow snails, the bundle of level 4 dwarves I have surrounding their entrance will squish them dead before they reach the first turn no matter what the map.

The maps themselves were fairly well-designed, and in the later levels actually required a little bit of thought in terms of unit placement. It’s just a shame that the enemies populating these maps didn’t offer up the same level of challenge.

An original twist and an introduction to storytelling win Defend Your Honor a place on the tower defense enthusiasts wall of fame, but some overly simple gameplay and a pretty short overall length keep it from reaching any type of TD greatness. It’s a fun ride and a solid introduction to the tower defense genre for those who’ve yet to broach the subject, but it’s just a little too paper thin to earn a 5 star recommendation from this battle-worn TD vet.

Bunni: How We First Met Review