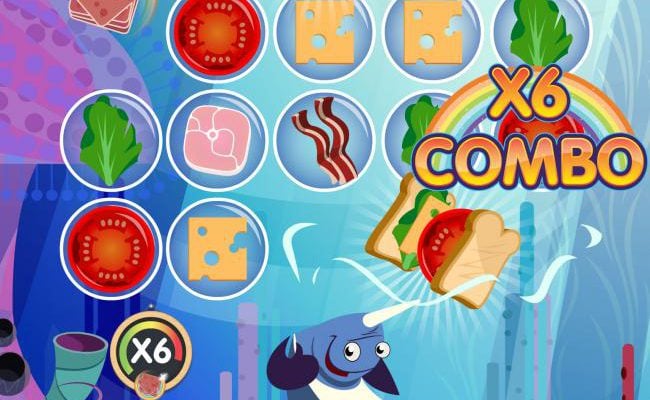 Everything’s better down where the sandwich ingredients are wetter.

Narwhals are the Jedi of the sea, and they’re also pretty darn good at making sandwiches. Deep Sea Deli by PlayFirst is an iOS puzzle game that shows off the aquatic species’ lesser-known talent at assembling bacon, ham, and bread into something magically delicious. Like a solid BLT, Deep Sea Deli seems unimpressive at first taste, but after you take a couple of mouthfuls, you begin to enjoy how nicely all the ingredients come together.

Narly is a narwhal who’s busy doing narwhal stuff when all of a sudden, deli ingredients start floating down from the surface world. What’s a narwhal supposed to do with tons of soggy bread, heavily salted meat, and wilted lettuce? Open his own deli, of course. Needless to say, you need to help Narly out since you have fingers and he only has fins.

Each game board in Deep Sea Deli is set up with several rows of bubbles. A queue of sea life is hungry for sandwiches, and you need to fill their orders. If, for example, a crab wants a lettuce and cheese sandwich, you need to drag your finger vertically, horizontally, or diagonally across two linked lettuce and cheese bubbles. As you progress, the orders become more complicated. It won’t be long before you’re building lettuce, cheese, tomato, bacon, and ham sandwiches (Narly’s deli is not a kosher deli).

Deep Sea Deli is simple to get the hang of. The real trick is clearing each board in a way that lets you use all your ingredients. If you don’t use your ingredients carefully, you’ll be left with isolated food items that aren’t linked to other ingredients, and therefore can’t be used. You want to fill orders quickly in order to score valuable point multipliers, but at the same time, a hasty move can result in wasted ingredients. 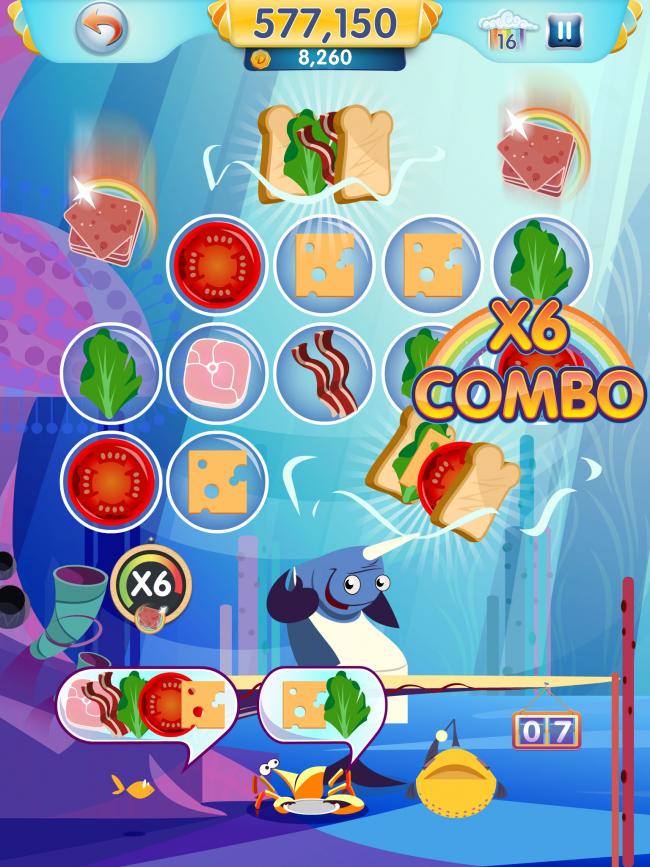 Luckily, you have a pet fish on hand who’s only too happy to hoover useless food. This lets you start the board again, but you need use the fish sparingly, since he can only eat so much. Once he’s full, your game is over.

The main objective in Deep Sea Deli is to score as high as possible. Grabbing a decent score means clearing boards without wasting ingredients, and doing so in a timely manner. To fall back on a cliché, Deep Sea Deli is easy to learn but hard to master, which is where the bulk of its appeal lies. It’s the kind of game that’s fun to relax with before bed.

Also, its cast of characters is pretty cute. It’s hard not to love Narly. He wears an apron, and when you clear a board, he shoots rainbow fireworks out of his horn. You probably thought narwhals use their horns to joust one another in competition for mates. Now you know better.

Deep Sea Deli might not contain enough variety for true puzzle freaks. Even though the game is fun, it plays a single note that gets old fast unless you’re really driven to score as high as possible. That said, given how easy it is to grasp Deep Sea Deli, it might make a great introductory puzzle game for younger siblings and other guppies.