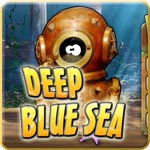 Even the most well-worn of genres can seem new again in the right hands, and Deep Blue Sea is solid proof of that. A debut title from The Game Equation (a studio founded by two of the programmers who worked on Eidos Interactive’s Hitman), Deep Blue Sea takes the match-three formula made popular by Bejeweled and its ilk and makes it its own thanks to the right balance of clever power-ups, challenging levels, and good production values.

The story, which is doled out in bite-sized portions every few levels, is a tad cliched but nonetheless well-crafted with a few twists and turns to keep players chugging through the levels to find out what happens next. It stars Jessica, a former advertising executive turned underwater treasure hunter whose chance discovery of mysterious artefact fragments sends her on a unique journey to discover the remnants of an underwater civilization.

Each dive that Jessica makes during her hunt for clues is represented by a grid that’s chock full of various sea-themed objects that, when matched in lines of three or more of the same object, disappear from the grid while new objects fill in from above. The goal is to maneuver key pieces of treasure to the bottom of the grid by making matches underneath them, which allows Jessica to "salvage" them to her waiting boat. The final important step is also making sure the diver returns safely, as represented by a scuba-helmeted head that must also reach the bottom of the grid before all the oxygen in Jessica’s air tank runs out.

Salvaging map and relic fragments brings Jessica closer to her goal, but that’s not all there is to do on the gameplay grid. Deep Blue Sea employs an ingenious and well-balanced power-up system where all of the crabs, octopi, jelly fish, sea urchins and other salt water critters aren’t just eye candy on the grid. Rather, matching them serves to charge various power-ups that you’ll receive gradually as you collect more and more relic pieces. Matching enough octopi, for example, charges the octopus power-up which destroys any block, while the puffer fish power-up adds a bit of air back into Jessica’s oxygen tank, and the sea horse power-up destroys an entire column of symbols. There are no superfluous or ineffectual power-ups here – each one is interesting and useful.

Finally, matching coins, candelabras and cutlery fills up a chest of money that Jessica can use to purchase useful items in between levels like extra oxygen tanks, a larger coin chest, magnets and bombs for clearing large areas of the grid. For a smaller sum she can also charge her power-ups to capacity before the level starts.

These twists not only keep things lively by giving you multiple goals to achieve for each level, but also lend new depth to an otherwise straightforward match-three experience. In Deep Blue Sea, every swap has a purpose behind it, whether it’s charging a power-up, filling a money chest or trying to move the treasures to the bottom of the grid. Also, the absence and presence of certain tiles is no longer just aesthetic, but instead directly affects which power-ups are available to you in a given level. (For example, you’ll have to move quickly in a level that doesn’t have puffer fish because you won’t be able to charge your puffer fish power-up to replenish your oxygen tank.)

Besides the robust power-up system, you’ll encounter tiles with chains across them that prohibit them from being moved until the chains are broken by incorporating said tile into a match. In later levels, the placement of chains, as well as ledges that impede downward movement, are increasingly fiendish. While some of the levels start to blend into one another after awhile – the level design isn’t quite as varied and sophisticated as Zen Gems, for example – it should still be enough to sustain interest over the game’s generous 130 levels, although you might find yourself wanting to take breaks and recharge the batteries every so often.

Deep Blue Sea is a promising debut from a new studio that we’re looking forward to seeing more from, if the enthusiasm they have shown for their first project is any indication of what’s to come.