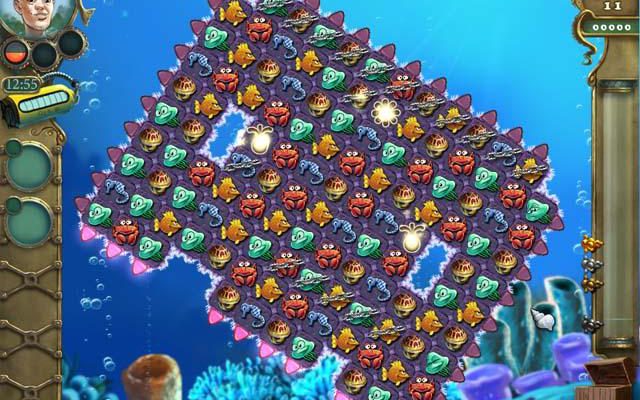 After working on the violent and mature themed Hitman game, two members of the development team switched gears and embarked on a journey into the casual gaming world by forming The Game Equation. Following a similar theme of change, the studio’s 2008 debut Deep Blue Sea blended match-three style gameplay with a tale about an advertizing executive named Jessica who ditches her day job to become a deep sea treasure hunter. Two years of polish and hard work have made their follow-up aquatic puzzle adventure all the more impressive.

In Deep Blue Sea 2, Jessica mysteriously goes missing and her loved ones fear the worst when they lose touch with her completely. Two year later, her younger sister Melissa suddenly receives a tattered postcard bearing a special note written in a secret language the siblings made up when they were kids. The message from Jessica tells her to travel to the Naval Museum on Billinger Island, but the eight month old postmark is of great concern. Heading off the island immediately, Melissa’s frantic search for her lost older sis begins. 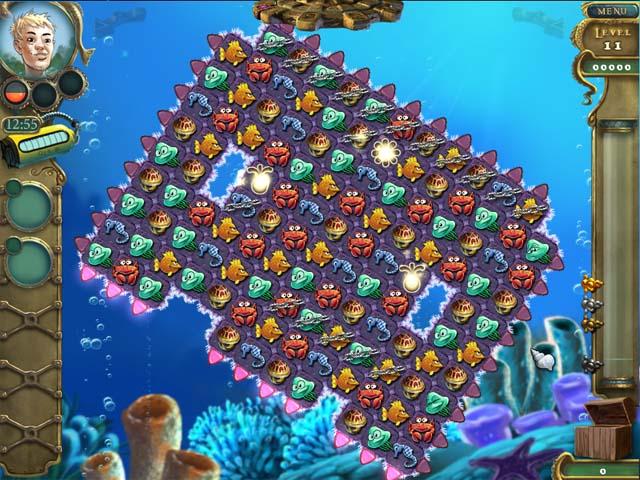 While Melissa’s adventure to hunt down Jessica provides the thrust for the story that gradually unfolds in brief vignettes every few stages, most of the action happens below the waves. Each level takes you on a deep sea dive where you’ll match sequences of three or more symbols (including coins, shells, fish, and other aquatic life) to clear them and impact the playing field. Instead of simply meeting a score quota, your objectives play directly into the story and characters.

A number of lost artifact treasures are scattered around the board in each level, and you must salvage them by making them fall to the bottom of the screen. Clearing all of the main treasures completes the level, but it also gives you important experience points that go towards leveling up your selected diver and improving their special abilities. A secondary goal involves matching coins to fill a treasure chest. Money you’ve collected in this manner can be later spent to purchase items and upgrades that help you out as the level grow trickier. An oxygen timer adds an element of urgency to the gameplay, since you have to collect all of the treasures before you run out of air. Fortunately, it’s possible to buy upgrades that extend this time limit.

In the search for her sister, Melissa will meet other characters with diving abilities that will join her group. You can choose anyone in the party to dive with for any given level, though there’s some strategy involved, since each diver has unique strengths and abilities that can prove particularly useful on certain levels. For example, Melissa can’t stay underwater for quite as long as other characters but she has superior treasure finding skills. Another character, Dodge, can use a special axe move that clears entire rows at a time and removes ice blocks. The more you use each diver the more experience they’ll gain, and they eventually obtain new powers as they level-up. This mild RPG element is a great touch and adds some strategic fun into the gameplay. 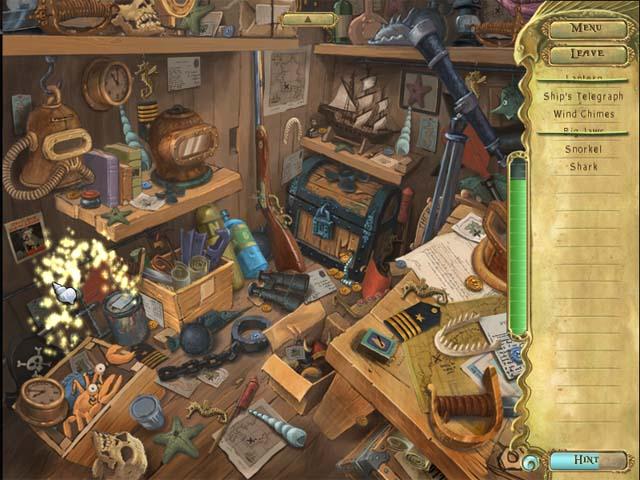 Other interesting twists make Deep Blue Sea 2 a really enjoyable experience. Some levels throw new obstacles at you, including rapidly spreading ice blocks that must be dealt with quickly and chains that prevent you from moving pieces unless they’re cleared. You can even rotate the entire playing field clockwise or counterclockwise, once you’ve acquired a special item early-on in the adventure. The sequel also incorporates occasional hidden object missions that appear on some island locations. This new feature has you hunting for listed items amidst a lovely hand-drawn scene filled with nautical-themed doodads littering the screen. It’s a straightforward addition that includes a hint system if you happen to get stuck.

Two years may be a lot longer stretch between releases than most casual games, but the extra development time really shows. This is far more than a copy-paste sequel, and the updates to the presentation, game mechanics, and new elements are notable. The visuals have undergone a major overhaul. The stylized, hand-drawn look of the characters, story section, and world map is really well done. The in-game puzzle elements are also much more polished this time around. The updated heads up display (HUD) and screen layout and the subtle animations worked into the aquatic puzzle pieces are solid improvements.

Many of the upgrades and additions in Deep Blue Sea 2 are well thought out and smartly implemented. The effort The Game Equation put into actually figuring out areas it could improve upon is something I’d like to see mirrored in more casual title sequels. It’s a fun game that goes far beyond slapping another set of levels on the same old mechanics.