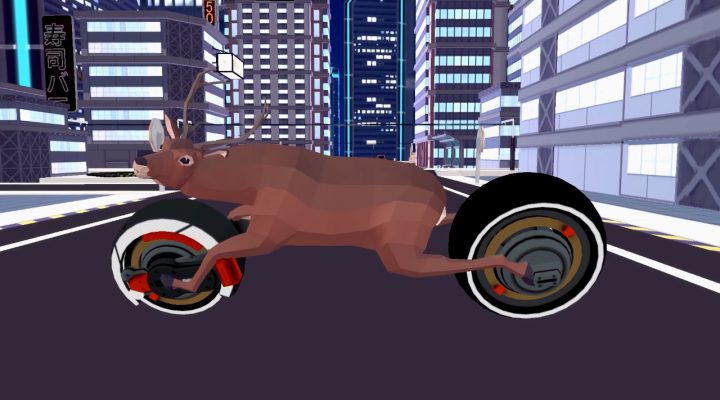 ...that aren't much fun to actually use

A videogame that sees you play as an animal causing havoc can be fun. Emphasis on can, because sadly there aren’t many fun titles in this often bizarre subgenre.

GOAT Simulator – despite all the memes and amusing video clips online – is rubbish. It kind of knows that it is, but still – it’s rubbish.

One of the few examples of the genre done well is Untitled Goose Game, which was a superbly endearing experience which benefited from some unexpectedly tight design. There were objectives that fitted naturally into the overarching storyline of being a horrible goose in a quiet village and it was a blast.

DEEEER Simulator is the opposite of tightly designed. It’s downright shoddy in almost every area.

This is almost certainly to help get the game attention by people laughing at how randem it is. But is it fun to play? No. No it isn’t.

You play as a deer, who may have been possessed by a human who saved your life. It’s not entirely clear, something that becomes a theme almost instantly.

So you’re dumped into a fairly large open world city, with humans, animals, cars, buildings, and a giant elephant flying in the sky. Yeah don’t ask, that’s just the start.

What becomes evident straight away is that you’re not lacking in abilities just because you’re a deer. You can run (in a human gait, which would be hugely disturbing, but, well…), shoot antler guns, drive cars, and stretch your neck out.

In terms of objectives however, there’s little to do. Destroying your surroundings fills up a meter that once completed sees the police chase after you, who you then have to destroy.

Unfortunately fighting these foes isn’t much fun because of the game’s controls, which are shonky beyond belief. Moving around is stuttery and landing attacks is often a crapshoot.

Driving and accelerating in vehicles is also done solely via the analogue stick. It’s all in aid of the game having a ramshackle charm of course, but that doesn’t make it acceptable. It just comes off as lazy.

We would be lying if we said we didn’t encounter some amusing moments in DEEEER Simulator though. The visual of a huge number of sheep cops charging at us over the ocean won’t leave our memory anytime soon, for instance.

But these small moments are lost in a swamp of poor graphical performance (despite the simple low-poly visuals), dodgy controls, and poorly thought out objectives.

There’s nothing wrong with strangeness, as long as it’s backed up with some solid fundamentals. But DEEEER Simulator goes for all-out weird and subsequently ends up falling flat as a game – which might be forgivable to some extent if it wasn’t for its high pricetag.