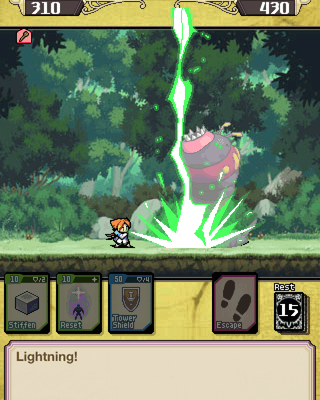 DeckMake Fantasy is a great mix of CCG and RPG, but suffers from terrible localization

I’ve always found card battle games to be a bit of a tough thing to imagine in real life. Maybe we’d all be better off if we settled our battles with cards instead of weapons, but it’s certainly hard to imagine, you know? Even in the anything goes realm of video games, it’s just hard to picture a band of Orcs stomping around the countryside breaking out their decks of cards when it’s time to pillage. Yet that’s pretty much the setup for Deckmake Fantasy.

The game plays out like your typical RPG, except instead of fighting you settle all your scores with cards. You and your enemies will be building decks of cards with abilities, and will fight by drawing and playing cards. It’s like playing Magic: The Gathering or Shadow Era right in the game, so fans of CCG’s and RPG’s will think this game is the best thing since sliced bread.

You’ll be able to acquire new cards as you adventure and can tailor your deck with the cards that you want, lending great diversity to how you’ll play through the game. It’s nice to have these kinds of choices, and if you want to go heavy spell or heavy melee attacks you’ll have the ability to do that.

The graphics are pretty adorable and are consistent throughout. It’s a really cute game that fits the Card RPG Japanese feel well, if there is such a thing. It’s also worth noting the game looks great both on the iPod and iPad. None of the cut scenes are animated, so it really falls to the art style and sound to breathe life into the game, and both do an admirable job. I was especially impressed by the variety of music in the game, and all of it really well done.

Now I’m not trying to go out of my way to knock bad localization, and it certainly doesn’t render the game unplayable, but it rears its ugly head over and over and over and just acts as a constant distraction to the enjoyment of the game. While reading the text to tell the story, you’ll need to keep stopping and re-reading things to try and figure out the intent of what it’s saying. I mean, what is “There is one boy who cast oneself into the current of the times” even supposed to mean? 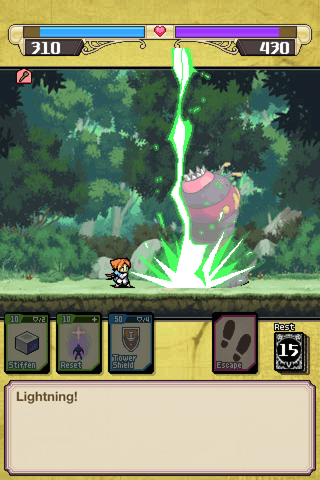 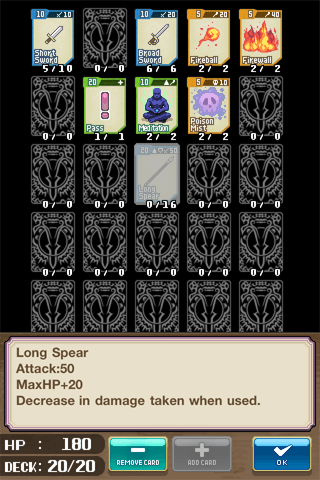 Bad translation aside, the game is actually a decent amount of fun. The card powers are all varied, and being able to build your own specialized deck really lets you customize the experience. The enemies and allies are all well designed and the art style really brings them to life. In addition to all of that, there are tons of different locations to visit as well.

Deckmake Fantasy does well on so many levels that it’s a real shame that the localization issues are constantly being thrown front and center. If you can look past that, then you’ll have very little to complain about while playing. I’d call it a bummer, but it’s by no means a dealbreaker.