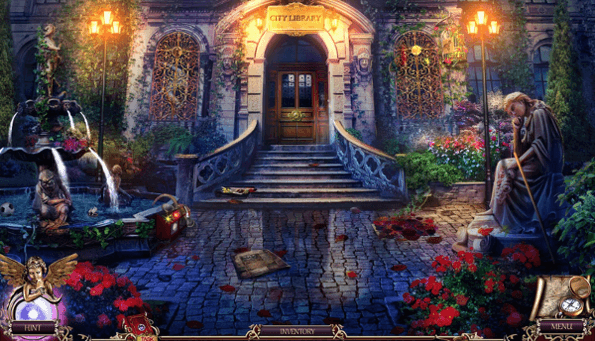 Search for three missing teenagers who have mysteriously vanished after visiting the local library.

Mega-developer Elephant Games has an impressive stable of successful hidden object franchises, and with the release of Death Pages: Ghost Library, it appears the plan is to keep on expanding it. The name “Death Pages” suggests games built upon distinctly literary themes; a compelling idea provided those themes are handled well. Ghost Library, while exhibiting a good number of noticeable imperfections, offers enough creativity and beauty to make it worth your time.

Most games cast you in the role of detective, psychic or crack reporter; Ghost Library makes you none of these and in fact, never really clarifies who you are. Regardless, when three hapless teens go to the public library and are never heard from again, you head right on over to look for them. Expecting nothing more than dusty stacks and snippy old ladies in bifocals and cardigans, you’re shocked to find the place run by a giggling madman with a penchant for creepy hand puppets. This bizarre personage has somehow abducted the three teenagers. He’s also used magic/science/vats full of glowing blue goo to transfer their souls to the pages of Shakespeare’sRomeo and Juliet. Ignoring the improbability of this, you spring into action since as most of us know, Romeo and Julietdoesn’t end well.

In many ways, Ghost Library follows the predictable hidden object template. There’s a victim (in this case, three), an abandoned series of locations, and a villainous miscreant who periodically appears to cackle at your incompetence. There are areas to explore, puzzles to solve and hidden object scenes to play through. Within that formula though, Ghost Library distinguishes itself in two main ways: creative puzzle design and a cool overall game concept. Although there are, admittedly, more missing keys and key-pieces present than there probably should be, the game boasts some of the most interesting puzzles I’ve seen in a while. (My favorites involve overlapping lenses, a UV light and a kind of teapot Tetris.) None of the puzzles are too difficult to solve, and they’re all beautifully made.

More significantly, the game’s core concept has near-endless potential. Other series have embraced literary ideas (the Edgar Allan Poe games come to mind) but with Death Pages being so much less specific, it could draw upon a broader spectrum of literary sources. Ghost Library proves this by starting with the timeless tale of Romeo and Juliet which it makes good use of, especially since the main characters in the play are indeed teenagers. Where things starts to break down however, is when seemingly random literary references are tossed in without rhyme or reason.

Hamlet (the character, not the entire play) briefly and nonsensically appears, and things get even stranger when Oscar Wilde’sThe Picture of Dorian Grayis partially inserted into the game. Things really fall apart though when the bonus chapter forces Dorian Gray(a 19th century morality tale) into the distinctly Renaissance time and setting of Romeo and Juliet. Hey, sometimes mash-ups work and sometimes they don’t. This time they don’t. The two stories have nothing in common with one another, and their combination feels forced. 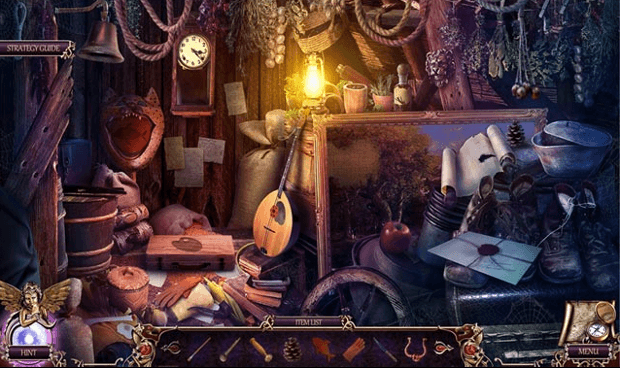 Still, it’s fun to jump into and out of different books solving different problems and experiencing different settings. Additionally, the game’s hidden object scenes create some semblance of continuity (they’re of the “put items back” variety instead of the “find items” one), and in many instances the item usage is cleverly conceived. Also somewhat clever is the journal map, which is a 3D model of the entire game world (accompanied by a flat layout map) that points you directly toward your objectives. The only downside to this fancy map is that its objective markers don’t always update, and this causes pointless revisits of areas that are already complete.

On the visual/aural side of things, the game fares pretty well. Attractive characters and nicely-done environments are the stars with solid voice performances and a dramatic orchestral score as the supporting cast. A few rough edges show themselves in the form of debug text (programmer text that isn’t meant to be seen by the public) and occasional mismatches between text and vocals. Much more annoying than these small issues though, one might say the “villain” of the whole game is well…the villain.

A hero is only as good as his nemesis, right? A villain should be clever and powerful and difficult to beat, otherwise how great is it for the hero to beat him? Maybe it’s an issue of the game never defining who you (the hero) are, but Ghost Library‘s villain is one of the sketchiest villains I’ve ever seen. Throughout the game you find pages that are supposed to explain the motives of this strange figure, but it never makes any sense. There’s never a believable reason for what he does, no mention of who he really is and no explanation for why he insists on wearing a creepy clown puppet on his hand. We’re just supposed to take it for granted I guess, that he’s evil and that evil people are ugly and bald and snaggle-toothed and like clown puppets. For a game with such literary pretensions, that seems like a pretty feeble approach. Ah well. 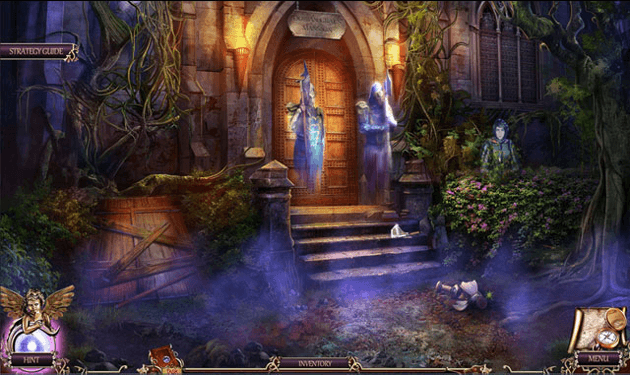 TheCollector’s Edition comes with a bonus chapter, a strategy guide, wallpapers, concept art, and a handful of musical tracks. The wallpapers, art, and music are fine, but the bonus chapter consists mostly of a totally thrown-together preposterous story and an extra hour’s worth of “find the key to this door or this box”.

All told, Death Pages: Ghost Library is a hit-and-miss kind of a game. When solving one of its unusual puzzles, it’s a good bit of fun; when trying to figure out why the heck anything is happening, it’s a bit of a muddle. The result of this drastic pendulum swing is a disconcerting combination of fine detail and rough edges that might not equate to a great game, but does prove the series’ potential.