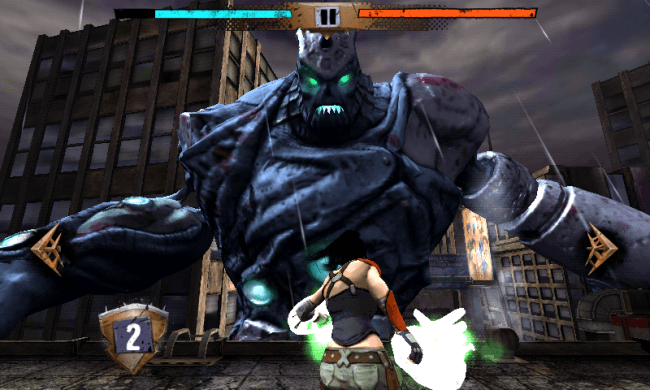 Not a popular vacation destination, believe it or not

I don’t know about you, but I hate it when a virus starts mutating people into monsters, the powers that be decide to seal the infected in a big dome, and you have to fight your way out. Of course if it’s just a game, it’s all good, which is why Death Dome by Glu Mobile is more fun than the real thing, even if  its gameplay doesn’t break any new ground.

The world of Death Dome was much like our own, until the M virus (one of the few letters not already used by the diseases in the Resident Evil series) began to take root. People started turning into unspeakable horrors, the worst of which became the hulking Behemoths. Once the M virus became strong enough to live outside a host, the decision was made to do the only sensible thing, which was to seal the city of Palamira inside a giant dome and tell everyone left inside, “Good luck!”

As a mysterious butt-kicking female known only as Phoenix, you don’t need any luck. That’s because you have a full complement of moves aped somewhat shamelessly from Infinity Blade and its progeny. Arrows on either side of the screen allow you to dodge attacks, a shield icon permits a limited number of blocks, and swiping in the direction of the incoming attack will parry it. Proper timing is key, and once a few attacks in a row have been properly avoided, the enemy is left wide open for you to swipe like crazy to dish out damage of your own.

There are a few extra wrinkles, like a Flux meter that fills up with each successful defensive move. When full, Flux mode stops time for some sweet combo action, ending with a finishing blow that hits extra hard. Some enemies have specific weaknesses that can be exploited by weapons with specific characteristics, and the boss battles against monsters that are several stories tall provide an extra test by stripping you of some of your go-to powers.

Victories yield experience points and skulls, which can be spent on improved weapons, armor and shields. Death Dome shows off its twisted sense of humor best in the gear selection, as you can choose to wield a giant bubble wand, the disembodied arm of a large mutant or an electric guitar as weapons. Most of your stat increases come from said gear, as leveling up pays off mostly with more hit points. The cheerfully named Death Diamonds are the premium currency, found in small amounts throughout the scavenging mini-game that precedes each battle, but mostly the game is waiting for you to pony up real money for them. 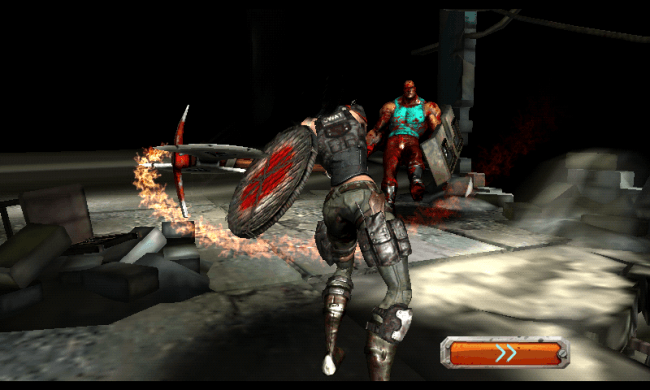 As you may have figured out, this isn’t a game for the squeamish. The violence is brutal and blood flows freely, though strangely enough, some of the most vicious acts occur partially off-screen. It has the feel of Mortal Kombat at times, albeit with none of that series’ innovative bent when it comes to finishing off helpless opponents. The graphics set a sufficiently post-apocalyptic tone, and there is a wider variety of enemies than you’ll find in other games of this type. Phoenix is the exception, as she’s a fairly nondescript heroine.

Despite all of the things that Death Dome does well, it’s hard to get too jazzed about it since we’ve been down this path so many times before. It’s not even a stretch for Glu Mobile, which has already done the Inifnity Blade homage itself with its Blood & Glory titles. If the setting, the carnage and the dark humor appeal to you, by all means give it a whirl, just be prepared for a little bit of deja vu while playing.