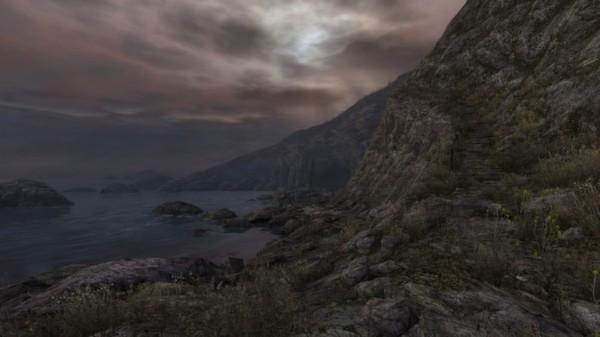 I’m not a philosopher. While I do find myself pondering and analyzing from time to time, I don’t make a daily routine out of finding “the meaning of it all” so I can’t pretend to be one. I’m not entirely sure that you require the person you’re interacting with to be one, which is a good thing. Your calming mood and subdued narrator are something that many people will enjoy, so it’s a good idea not to turn anyone off with my take on you. But really though, the question is: What are you?

It would almost be rude of me to call you a “game” in the traditional sense. You’re completely unlike most of what people will find here on Gamezebo. You’re interactive, but there’s not a single combative element to you. It’s more that you have a story to tell, or you want to relay some details about something else that happened in your world. Either way, you let people stroll around your world, leaving it completely up to them to decide what paths to take and what sights to see. You don’t let them run or jump, only walking and using one button to slightly zoom their vision. Four chapters are offered to your viewers that flow into each other with short breaks to load the next one. The experience could be over in an hour or four, depending on how much people want to see of what you have to offer.

Dear Esther, you are truly beautiful. Your dark island and coastal visuals will make everyone stop and look around. They won’t mind not being able to rush through your landscapes and caverns, since they’ll find themselves gazing at every vista and detail. You’re not just pretty though, you sound amazing too. The subtle natural effects of the wind rustling the vegetation and the sea lapping against the shore provide a wonderful backdrop for the perfectly delivered narration that’s triggered by certain locations and paths. Then there’s that haunting piano score that enhances the emotional cues that slowly unwind as you give the player another subtle hint at what your story might be. You’re an intensely high quality package.

Nobody will really know what you’re all about when they first encounter you, and that worries me a bit. I think someone might read a description of you and infer that they’ll be buying an adventure game or some slight survival horror experience, and you’re not really either of those things. You’re something that needs time to unwind and someone who will be receptive to what you’re offering. Not everyone is going to be completely enchanted with you or want to take the time to let things happen. I don’t think it’s your fault, but it’s still a present concern that most people who will also read this might want to know.

I can’t stress enough how you’re not a traditional game and I don’t need you to be that. People will fall in love with you, sing your praises and search for other people to discuss your “meaning”. In my opinion, there aren’t enough experiences out there like you. Most of the time we don’t see games that try to pull off what you do with such a stunning coat of polish on the entire experience. Hopefully, Dear Esther, you’ll help change all that.