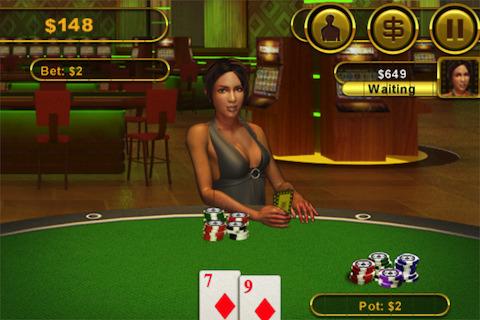 Deal or No Deal is all about tension. At one moment you could be on top of the world, and the next you could lose it all. The iPhone game version, dubbed Deal or No Deal: Vegas Gold, tries to emulate this, but without having real money to play for it ends up being a somewhat hollow experience. To try and alleviate this somewhat the developers have thrown in a number of casino games as well, though these are all relatively simple and don’t really fit in all that well with the game show portion.

The game is set-up like a casino with multiple levels. To start out you only have access to a few games, beginning with blackjack and poker, and you unlock more as you progress. The money you earn can be used to buy new games, culminating in the ability to play the actual Deal or No Deal game you originally signed up for. Each level of the casino has the same games, but with higher payouts. All of the casino games are pretty simple so long as you already know the rules, though they aren’t always explained properly. It’s not always clear whether you need to tap or swipe, and doing the wrong one can result in losing some money.

Once you unlock it, the Deal or No Deal portion of the game is about what you’d expect. For those who haven’t seen the show it works like this: you’re presented with 26 briefcases with cash inside ranging from $1 to $1 million. You slowly eliminate briefcases with the goal of earning as much money as possible. And every once in a while a “banker” will come along and offer you a sum of money. You can choose either to take it, or to continue selecting briefcases. The problem is, this type of game show doesn’t translate all that well to a video game. Because you’re not dealing with real money, the tension is non-existent. And since there’s no real strategy to the game — it’s entirely based on luck — this eliminates the core appeal.

Like the game show it’s based on, Vegas Gold is pre-occupied with the models that hold the briefcases, so expect to see plenty of them. There are real-life images of models that appear during loading screens, and throughout the game you’ll be treated to a wide range of 3D virtual eye candy. Unfortunately, the poor visuals and bad animation make these virtual ladies look much more awkward than attractive. The game also doesn’t feature host Howie Mandel, which, depending on your tastes, is either a good or a bad thing. 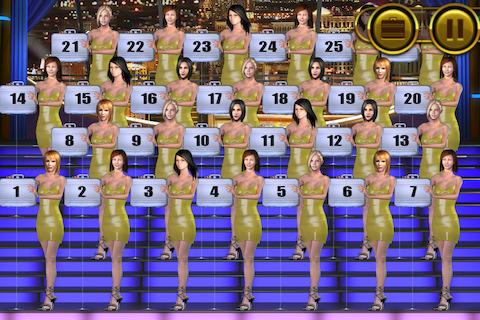 There are plenty of good casino games on the iPhone and plenty of good titles based on game shows as well. Deal of No Deal: Vegas Gold attempts to merge these two genres, but doesn’t do a very good job of it. Not only are the games pretty uninteresting, but the addition of a casino theme robs the game of its TV show charm. Unless you’re a die hard fan, this is easily a no deal.

Tasty Planet: Back for Seconds Review