Home / Reviews / Deal or No Deal on Facebook Review 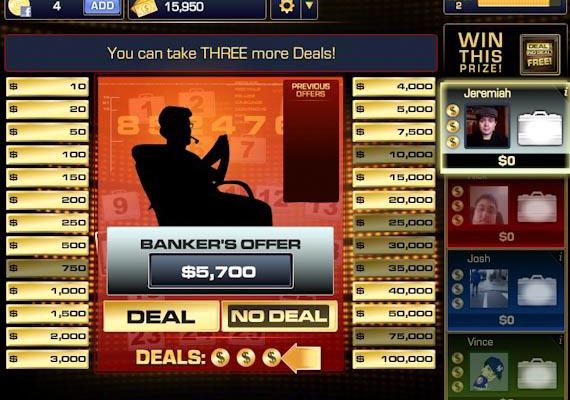 Let’s be honest here: at its core, Endemol’s hit show Deal or No Deal is simply a game about picking some random briefcases and hoping you win something. That might be suspenseful when there’s a chunk of real money at stake, but it’s a rough concept on which to build an enduring social game. While you can’t go wrong here if picking random briefcases is your thing, the deal this title offers every other player is shady at best.

Deal or No Deal plays much like the American version of the world-spanning game show, in which you start by grabbing one of 26 briefcases that could have anywhere from $10 to $1 million depending on how far you’ve leveled. The amounts contained in each briefcase are marked on a board, which are marked off in turn while you pick other briefcases in an effort to guess which amount is in your own. Every so often, a shadowy banker offers a deal in an effort to buy you out before you learn what’s in your own briefcase. You can take up to three of the banker’s deals, or you can ride out the rest of the round in the hopes that there’s more cash waiting in the case you picked at the beginning. 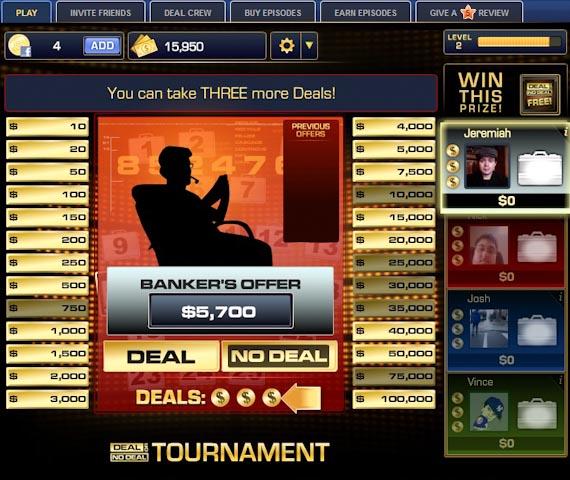 In other words, it’s only a step above playing slots. The banker’s deals and process of elimination involved mean that there’s a dash of strategy in deciding what’s in the last few briefcases, but in the end it mostly comes down to dumb luck. If you win over $25,000 in the free daily “classic” game, though, you can participate in a tournament mode that pits you against other random Facebook players’ profiles for a chance at greater prizes. This illusion of playing against other people does much to recreate the excitement of the show, but it’s a fleeting thrill that quickly evaporates on multiple playthroughs.

The developers seem to realize this. You can only play a free “classic” game once every 12 hours (unless you buy another one for six Facebook credits), and this restriction manages to keep the game more interesting simply by keeping you away from it. This means that you’ll only be able to play for a handful of minutes at a time unless you’ve won big in either the classic or tournament modes. You can occasionally win new free games as a hidden bonus or by simply logging in every day, but don’t expect to sit down and play this for more than a few minutes per day at the casual level. 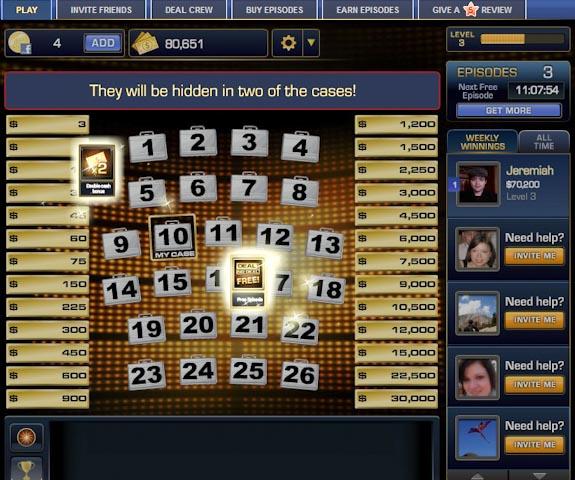 Yet from a performance perspective, there’s really nothing wrong with Deal or No Deal. It runs smoothly, it employs a standard bonus system for inviting your friends, and it’s largely faithful to the television program. There’s plenty to enjoy here for devoted fans, although a few references to beloved host Howie Mendel might have made it a slightly better title. But in the absence of any real cash rewards, the mediocrity of Deal or No Deal‘s concept lies dangerously exposed. In the end, even the most ardent fans are likely to walk away with the impression that this new social title is no big deal at all.