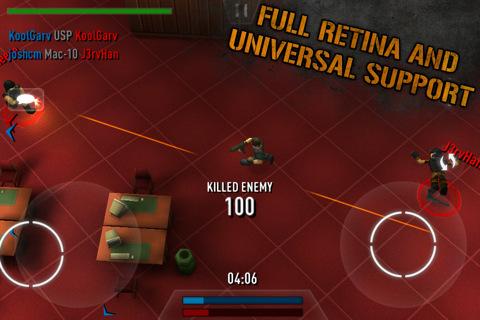 Twin stick shooters are a particularly well-storied genre on the iPhone, so it takes a title that’s particularly unique to really knock our socks off. By combining the fast paced action of twin stick shooting with the team-based multiplayer of online first person shooters, Deadlock: Online manages to do just that.

The first freemium offering from Crescent Moon Games, Deadlock: Online pits players against other real world competitors in a bit of old fashioned red vs blue combat. Utilizing the classic twin stick formula – movements is controlled with a left stick while firing is controlled with a right – the game allows up to 8 players to participate in deathmatch, team deathmatch, and capture the flag competitions.

Each game typically lasts no more than 5 minutes, with a final win typically being triggered before the timer runs out by one player or team reaching a key objective (total points, for example). Jumping in and out of a game is a painless process if you’re pressed for time – but if you’d rather set something up with your own custom parameters, that’s an option too.

The gameplay here is exactly what you’d want it to be. Everything controls smoothly and intuitively. If two opposing players are locked in battle, spinning around each other endlessly in a hail of bullets, a little auto-aim nudge steps in to make sure you’re hitting the target if the bullets would have otherwise whizzed by him a pixel or two away.

At launch the game offers 5 maps, and they’re all terrific. Players can run behind buildings, furniture, and other items to try and protect themselves from the endless storm of gunfire. No two maps play alike, nor do they look alike. You’ll play in an office, a parking lot, an arctic base – everything looks and plays strikingly different.

The freemium elements come in the form of unlockable weaponry. As players earn experience and level up their rank, they’ll earn unlock points that can be spent to open up new weapons and armor for their character to start the game with. As you might have guessed though, earning these points can take a bit of time if you’re going about it the free way. If you’d rather part with your cash and shortcut your way to a well-stocked armory, you can always buy unlock points through in-app purchase. The developers are also promising asynchronous daily and weekly tournaments to award players with more of the in-game currency than they might otherwise earn on their own. 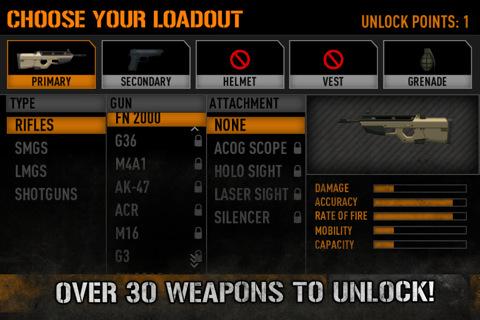 The notion of buying every weapon you could ever want might sound like something that could leave the game a tad unbalanced for players looking to take the free yet slow path, but the developers wisely set it up so that a dead soldier’s weapon can be picked up by anyone on the battlefield. Just starting out the game with a puny little Mac-10 assault rifle? You can always pick up the M60 that the big spender with bad aim just dropped.

Likewise, one of the biggest complaints about games like this is that they have to be played online. Deadlock: Online additionally offers an offline mode to address such concerns. Offline will pit you against AI players in standard match play, or if you’d rather, you can tackle a survival mode that’s unique to the single player experience.

A game like this will live and die by the number of people that continue to play it online – but considering the success a freemium twin stick shooter like Gun Bros had before it had online play, it seems like a lock that this one should have no problem finding a dedicated following. Those with a hankering for five minute pocket team combat need look no further: Deadlock: Online. Be sure to set this one in your sights.