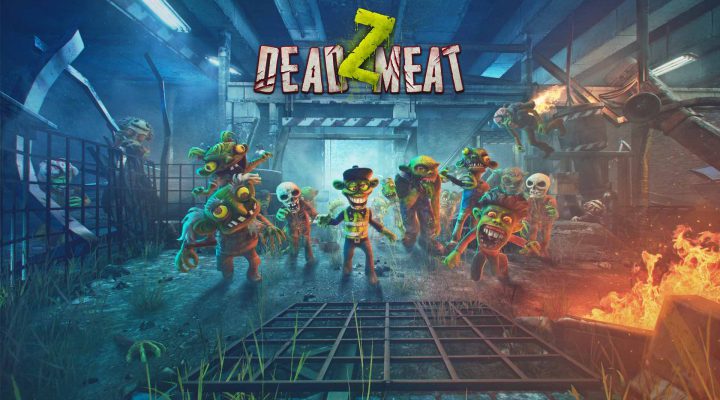 The light gun genre is notably under represented on the Switch, which is a shame. Something like Dead Z Meat shows they can work on the system after all.

It doesn’t fare hugely well beyond being just aa moderately pretty shooting gallery – but it does the job it sets out to adequately enough.

Effectively the game sees you going from short stage to stage across a world map, each one asking you to blast away at a set number of undead foes – making sure they don’t get you, or reach certain areas. You know the drill.

There’s nothing as iconic enemy wise as from House of the Dead here, but each undead denizen is fairly recognizable – making it easier to get into a rhythm when it comes to taking them out.

Shooting feels satisfying for the most part, and there’s a range of guns you can unlock and upgrade. Some weapons feel a little clunky – the sniper rifle feels nowhere near as powerful as it should do, for example – but everything works reasonably well as a general rule.

Yet that sums up Dead Z Meat – it’s perfectly serviceable rather than being spectacular in any way.

There’s very little that sticks with you. No real stunning set pieces, no enemies that make you gasp, or flourishes that set this apart from any other shooter out there.

The lack of a two player option is a major oversight too, especially as the game works reasonably well undocked (although you do need to remove the joycon to play, so beware Switch Lite owners).

Dead Z Meat is a very focused experience – with the single player campaign being the only mode on offer – but the issue is that it doesn’t focus on very much.

If you’re looking for a solidly assembled lightgun style title on Switch you can do a lot worse than this, just don’t expect to be amazed.

There’s certainly promise here though, and we look forward to seeing what isTom Games does next.