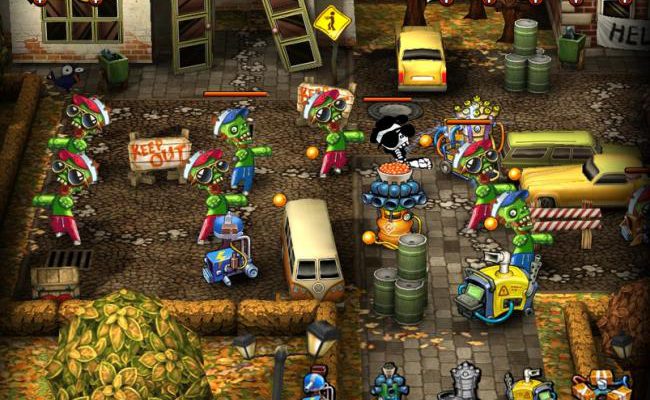 It may not move tower defense forward, but it doesn’t bring it to a dead stop, either

Since its inception in 2008, the App Store has become packed to the brim with games. If there’s one game type that gets more than its fair share of representation, it’s tower defense. And if there’s one theme that has overrun nearly every genre, it’s zombies. So what can one expect when the most done-to-death concepts get mashed together into one game? Chillingo decided to find out their latest title, Dead Stop. The game comes from the team behind Dead Island, so they know zombies, and Chillingo, who definitely knows the mobile market. Does this undead killer go against all odds to kill off cliches or should it just be left for dead?

The plot of Dead Stop isn’t exactly a difficult one to guess given the elements that have been introduced thus far, but in case you’re having difficulty keeping up, you’re going to have to defend people from zombies. You’ll do this by placing the creations of a crazy scientist — or maybe just a crazy guy in a lab coat — along the path where the zombies come. Ranging from peashooters to traps and ranged blasters, these devices all accomplish one simple goal: genocide against the undead. 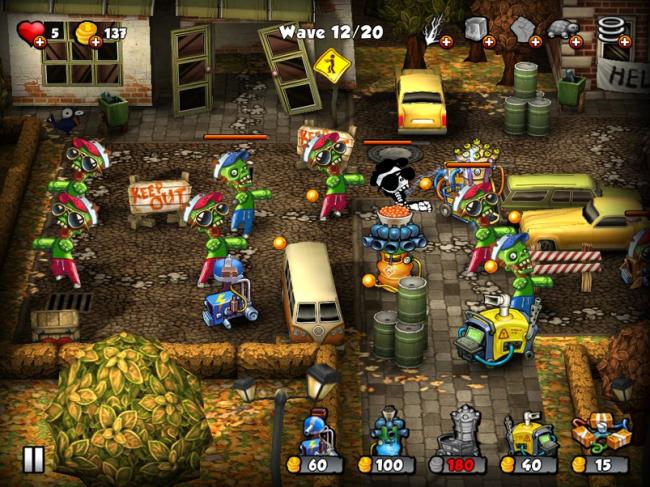 Gameplay is pretty simple and straightforward. There is a path along the ground that the zombies walk across — because zombies are known for their organizational skills and single-file lines — that leads directly to potential victims. By placing objects along the path, you will stop these walking corpses in their tracks. Every weapon you set up will cost you coins, but you earn them back with every kill. That money can also be used to upgrade your towers and improve your defenses. This will come in handy as more specialized zombies make their way across the landscape. And when things start to get a little too overwhelming, you can invoke the power of science. This includes things like lightning, slowing movement to a turtle’s pace, and more. Save for a couple levels that introduce slight variations on gameplay, this is everything you’d expect in a tower defense title.

Of course, being a tower defense game, you can choose to access and unlock all of the things mentioned above without having to do the whole “playing the game” part. Get your towers in tip-top shape, take full control over all that science has to offer, and fight back the walking dead with ease by doing a couple in-app purchases. Or don’t. Dead Stop does a pretty good job of not requiring extra investments to reap the rewards of playing it. You can grind it out without a significant amount of drudgery. 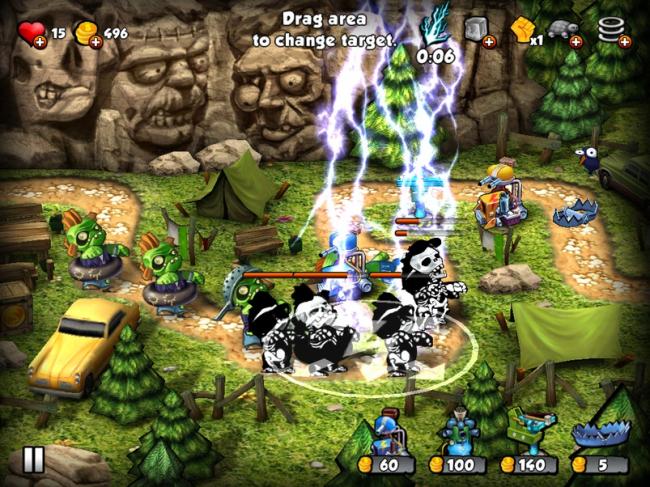 Dead Stop looks pretty darn good, with faux-3D visuals that make certain elements really pop. The landscape changes regularly enough that the aesthetic never get too boring or repetitive. The sound effects and music are equally well done, maintaining a somewhat quirky vibe. The zombie grunts and groans are more funny than intimidating, and the paranormal-esque soundtrack is kept lighthearted in its tone.

Dead Stop isn’t really doing anything new with the tower defense concept. Then again, it doesn’t pretend to, either. If you go into the game knowing how the genre works and are just expecting it to have a little fun with the zombie theme, you’ll be pleasantly surprised. The gameplay isn’t innovative, but it’s pretty darn good. Though the zombie thing could easily seem like a gimmick, it definitely works in the title’s favor. It’s a fun, goofy, and good-looking game.