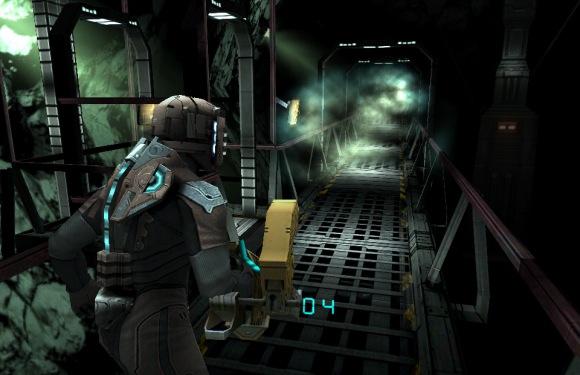 In space, no one can hear you scream. I kind of hope the same is true for whimpering, since while playing Dead Space last night I was definitely doing my fair share of that. Turns out playing this game in the dark while wearing headphones is enough to freak out a man in his 30’s. It’s not something I’m proud of, but it happened nonetheless. Luckily I was thoroughly entertained while being scared.

EA really came out of the gate blazing in 2011 with Dead Space for iOS. If this is indicative of their level of commitment to the platform for the year, I can tell you right now we’re in for 12 months of good times. The game “wows” in just about every aspect, and what follows is really just a gushing review of a game I think is darn near perfect.

Story wise I don’t want to give anything away (I hate spoilers), but the plot takes place between the original Dead Space for home consoles and its brand new sequel. While not a critical component of the overall story, the iOS game does a very nice job of bridging the two together. It’s well done and easily enjoyable even if you’ve never played the other games before. But if you’re a fan, obviously you’ll want to devour all the plot you can.

There aren’t any onscreen controls per se in Dead Space, but it handles similar to other twin stick third person action games, with the left thumb working movement and the right moving your head and aiming. Double tapping with your left thumb performs a quick 180 spin, which came in super handy during firefights.

The Dead Space franchise offers a unique twist in combat, as most guns have both a vertical and horizontal firing mode. That carried over here in the mobile version as well, as you switch back and forth by giving the device a quick little rotation. It works very well and feels good doing it. It’s all very intuitive.

As fun as the gameplay might be, the production quality of Dead Space is what really sets the game apart from other titles I’ve played on my iPhone and iPad. The visuals are as impressive as anything we’ve seen on an iOS device thus far, including bench-setter Infinity Blade. The voice acting is top notch throughout as well, which isn’t something we say often about iOS games. From top down, this is a game that was obviously well cared for, and clearly groomed to be a EA’s strongest iOS outing yet. 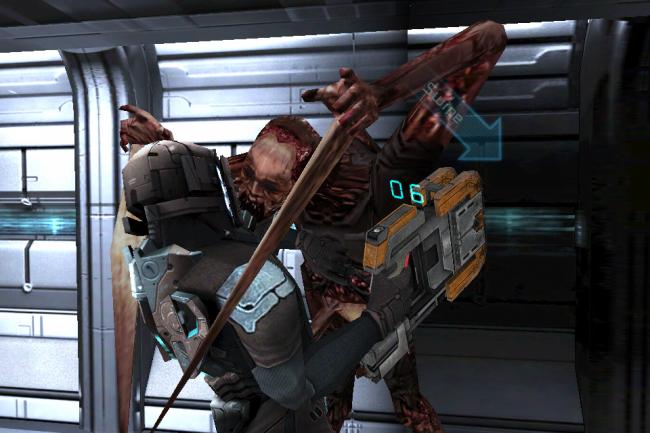 What I was most impressed with was how well they were able to re-create the “experience” of the Dead Space console game. As a big fan of the original and someone highly anticipating the sequel, I was prepared to hold this mobile game up to a higher bar than normal. I demanded a Dead Space experience, and much to my delight, I definitely got one.

It’s one thing to do a good job on things like the controls or the graphics, but Dead Space on iOS is genuinely frightening, which in a game like this is practically vital. The world hinges on making you afraid of it, and just like the home version, the mobile version never fails to find ways to scare you. A dark hallway only lit by a single light cascading through a spinning fan is scary enough, but it’s the thought of what could be in the shadows that really puts your mind on edge.

If I have any complaint about the game at all, it’s that the screen on the iPhone can get a little cramped with icons and fingers, leading to some frustration when trying to aim and take in everything that’s going on. If you have the option, I’d heavily recommend the iPad version, in which the larger screen alleviates any annoyances. Sadly, EA still doesn’t sell universal apps, so unless you want to buy it twice you’ll have to pick one or the other.

Usually when I’m scoring these games I think to myself of ways I would make the game better. The more things I think of that the game needs or could use, the lower the score ends up being. When it comes to Dead Space, there really wasn’t anything I could think of that was missing. The game provides a genuine Dead Space experience while simultaneously raising the bar for triple A titles on the iPhone.