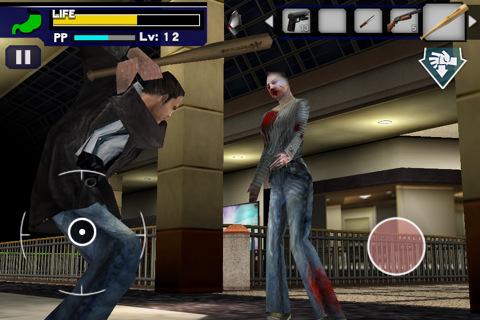 Two years ago, if someone had said that console-quality gaming would be possible on a phone, nobody would have believed them. Yet, in the last two months of 2010, we’re treated to three titles that are pushing the envelope of mobile gaming: Rage, Infinity Blade, and now, Dead Rising Mobile for the iPhone.

Loosely based on the Xbox 360 title of the same name, Dead Rising Mobile puts you in the role of photojournalist/Chuck Norris incarnate Frank West, sent to a middle-American town to investigate a zombie outbreak. When he arrives, it becomes a battle of survival against the hordes in the mall. Frank can use almost anything he finds as a weapon, from garbage cans to park benches to katanas (that just happen to be floating around in a mall… just work with it). Unlike the original game, Dead Rising for the iPhone doesn’t really have much of a central plot to work with, but rather, is a fun action game that is designed to be played in short bursts – perfect for portability.

After getting acclimated to Dead Rising‘s controls, Frank is instructed to head to an S room (the place to save your game; there are many of these rooms, so you’ll rarely be too far from one). Once there, he can select a mission to complete. These missions range from retrieving an item to rescuing a survivor. Once each mission is completed, you’ll earn PP, the game’s experience points. (You’ll also be able to earn PP through the game’s vast achievements list.) The higher Frank’s level, the stronger he is, the more powerful he is and the more items and abilities he can use.

Dead Rising‘s controls are shockingly solid for a touch screen. The control stick on the left side of the screen is surprisingly accurate, and the attack/context action buttons on the right are very responsive. There was little lag between a button press and Frank’s action, and while it’s unfair that Frank cannot jump, the mall is designed to be navigable without it.

The mall itself is enormous. There are several wings to the mall, with a central lake/trail area in the middle. There are restaurants, clothing shops, sporting goods stores (perfect for finding weapons like baseball bats) and parking lots to explore. You’ll be backtracking back and forth a lot for your missions, so you’ll get to know the mall very quickly and be able to get to your destination without the helpful in-game map. You can also follow the 3D arrow icon at the top of the screen to point you in the right direction.

Once you’re fighting zombies, it’s all about your weapon. Though the selection is far more limited in this version than the console original, there are still a ton of weapons to use. Using the lawnmower to plow through a crowd of zombies (complete with appropriate sound effect and groans) is a morbid pleasure. Each weapon has a limited life, and the icon will start flashing when it’s about to break. 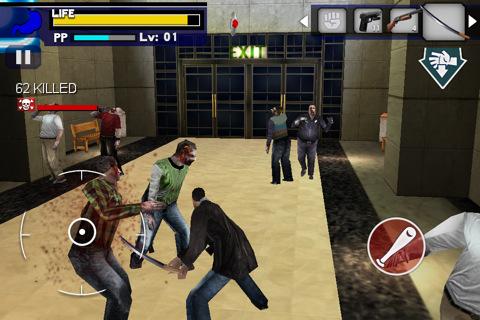 To keep Frank alive you’ll have to grab random food from around the mall (the food court is a great and obvious place to stock up). Frank also has a hunger meter, which needs to be kept up. This meter depletes through normal play, and it goes especially fast if Frank uses a special move he acquires through books he picks up, so you’ll need to keep him well-fed. This isn’t nearly as horrible a chore as it sounds.

Should you die in Dead Rising, all hope is not lost. If you connect your game to Facebook or Twitter, you can send out a Rescue Call to your friends. IF someone comes along and revives you, then you can continue. If nobody does after a period of time, you’ll appear as a special named zombie. However, if you choose not to connect to any social network, then you’ll lose every item you were carrying and a couple of levels of experience. It seems just a tad punishing for those not willing to bombard their friends with spam about the game.

Dead Rising does a whole lot right, but sometimes bites off more than it can chew. It’s great to see designers creating more robust games, but the hardware isn’t ready for it. For example, the 3D graphics are quite decent considering how large the environment has to be. Unlike Rage, which gives a pre-set view, so it can maximize the detail on the limited space you’re seeing, Dead Rising needs to be flexible. As such, there are issues that plagued early 3D gaming of the mid-1990s. For those who remember, the dreaded pop-up, draw-in and slowdown all rear their ugly heads (pop-up means that objects spontaneously appear, and draw-in refers to the scenery kind of melting into existence as you approach it). Again, the designers had the right idea, but the hardware couldn’t keep up.

This hardware limitation also applies to the number of zombies onscreen at once. One of the big joys of Dead Rising on the Xbox 360 was needing to wade through a sea of them. Here, you’re lucky if you get a group of 12 together. Considering the amount of free space you’ll have around you, the sense of jeopardy isn’t as great as it might have been. 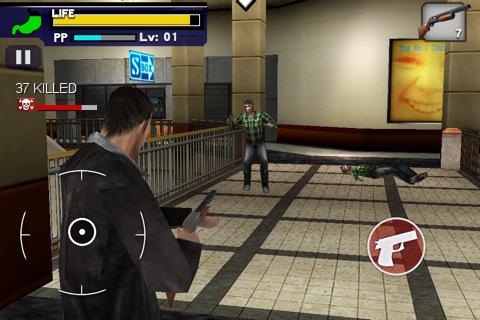 Dead Rising‘s worst problem is its awkward, clunky camera. The camera focuses on Frank to the expense of everything else, including whatever is attacking you. If you attack and are suddenly sidestepped by your foe, you can’t just turn to face it. Frank has to turn like a tank for the camera to really follow. There were a few times I was attacking the air because I couldn’t get to my main foe. It’s not game breaking – you’ll learn to make attack runs against the harder bosses – but it’s still an issue.

Finally, a word of caution: Dead Rising is very much a mature game. There is some salty language within the opening movie, and there’s blood and slaying galore. Dead Rising not appropriate for children, and people who don’t like horror films should steer clear.

For the rest of us, Dead Rising is a great leap forward in mobile gaming. While it has a number of growing pains, Dead Rising Mobile shows us that great 3D gaming on the iPhone is just around the corner, and the traditional portable console makers should snap to attention. It’s definitely worth a play through, particularly if you’ve got the latest iteration of the iPhone or iPod Touch.