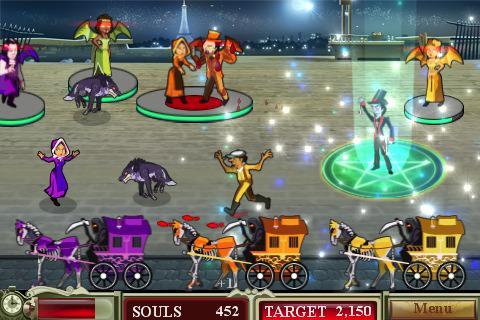 With vampires getting all mushy and romantic with the recent explosion of the Twilight series – not to mention good ol’ Buffy the Vampire Slayer – it’s nice to see someone remembering that these creatures of the night are meant to stalk and consume for their own selfish, dark needs. In doing so, BigStack Studios has made Dead of Night, a game that sucks… in a great way.

In Dead of Night, you control a society of vampires that is out to consume foolish villagers who venture out at the wrong time of night. There are a variety of vampire types, each with different attributes denoted by different colors. Some vamps are fast feeders, some have great stamina, and some are very weak but old and revered and must be protected. In the end, you’ll help bloodsuckers through 40 levels across Transylvania, Moscow, London, Venice, Berlin, Paris, Rome and finally Prague.

Each colored vampire likes to feast on a villager with a matching color. Vampires and villagers entering the playfield are noted with small, colored icons on each side of the screen. Once you find a villager who looks like a good meal on legs, simply trace a line from the vampire to that villager who will then be locked in the vampire’s gaze. After a short time the villager will be turned, but needs to be whisked away in a like-colored carriage to join the rest of the ranks. Wait too long and the villager will simply roam away, and you’ll be left with one fewer member of your undead army.

While any vampire can bite any villager and be put into any carriage, matching colors adds up to more points. Each level has a point target, as well as an expert target, so it’s best to try to keep those colors matching.

Of course, there are plenty of baddies – okay, baddies other than yourself – out to stop your reign of terror. Most common are WereBeasts, who need to be flicked away using the touchscreen. Other enemies require different actions to defeat them. Ghost Wolves need to be tapped in order to crumble them, and Towers of Dawn – a tower on wheels that makes portable sunshine, deadly to your vampires – needs to be rolled past your troops by tilting the iPhone in the same direction to roll it faster. Even the legendary Van Helsing himself makes an appearance. If you don’t trace a line for the vampires or villagers away from him, he will teleport people within his circle of light away forever! Each enemy requires distinct method to defeat them, and in the higher levels you’ll be tapping, flicking and tilting about as fast as your iPhone can process it. 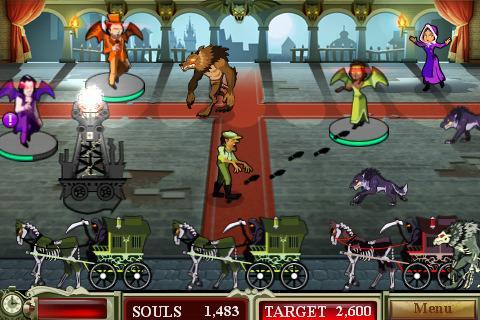 Dead of Night is a beautiful game. Right away, you’ll be drawn in by the dark, pulsating soundtrack and rich graphics. In spite of all the different colors of vampires and people, you’ll never get them mixed up. The tracing of your finger is accurate and fast, the tilt for the Tower of Dawn is responsive. Everything here is very clean, tight and solidly-produced.

But most of all, the game is really fun. Keeping track of what’s going on onscreen becomes an amazing arcade-style twitch action experience, while keeping the enemies at bay or removing your people from the threat is more castle-defense. Yet, the two feel integrated seamlessly. The challenge is on a great slope. Though you’ll probably fail a level, it will never be a frustrating loss and you’ll want to dive right back in. To top it all off, all the perks of OpenFeint, with achievements and leaderboards, are in this package too.

In fact, the only caveat of Dead of Night is that some players not like the themes and mild blood seen in the game. It’s not frightening by any horror film stretch, but is definitely worth noting. For those of you who like a game with some serious bite, you must check out Dead of Night. It’s one of the best games going for the iPhone right now, and a decent contender for one of the best games of the year.