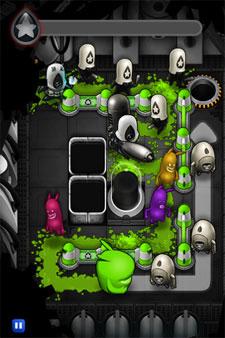 As fans of the previous paint-by-numbers platformers to bear the De Blob name, the last thing we expected from the series was a brain-tingling puzzle game – but that’s exactly what De Blob Revolution is. You’ll need to think spatially and think quickly if you want to free the trapped graydians and bring color back to the world in this line-drawing, fast-thinking puzzler.

De Blob Revolution is all about reaching a number of checkpoints without ever crossing over your own path. The checkpoints in this game come in the form of graydians: poor drab creatures that the villainous INKT has robbed of color. Touching each graydian frees them from their prisons and infuses them with a healthy dose of paint. Your own path that you musn’t cross over is a trail of paint that you leave behind you, not unlike a slug leaving a trail of slime. The objective is to free as many of the graydians as you can and find your way to the exit. If you cross your own path or paint yourself into a corner, it’s game over.

The gameplay might be quick, but you’ll need to take a few moments at the start of every level to think things through. You’ll draw a line throughout each stage to guide your blob from start to finish, attempting to touch every graydian in between. With an assortment of obstacles and walls, playing De Blob Revolution feels a little like trying to solve a maze in a matter of seconds. Once you get the hang of it you’ll be rescuing graydians left and right – but that doesn’t mean you’ll ever face a level without having to think things through first.

De Blob Revolution offers up different scenarios and difficulty levels to keep you feeling challenged throughout, but accessing these isn’t as easy as it should be. When the game begins you’ll be provided access only to the basic mode and easiest difficulty. Each game only last four levels, and at the end of each game you’ll be awarded points. Score enough points and you’ll unlock new difficulties and scenarios to tackle. There are three scenarios in all, each with its own difficulty slider.

In the first scenario you’ll just be tackling the basics. Free the graydians, get to the exit, and don’t cross your own line. The second scenario adds a time limit into the mix, and the third has you trying to avoid the INKT while freeing prisoners. There’s only one problem: all three modes play exactly the same. If you’re able to master the basics you’ll never be in trouble with the time limit, and you’ll usually be at the exit before the INKT are set foot onto the level. Regardless of what they add into the mix, the challenge always feels the same.

We were also surprised by how often we saw the levels recycled. While each play through presents you with four stages selected at random, those stages repeated more often than we’d have liked. You might not notice it at first, but after an hour or so it becomes pretty apparent that there are only so many levels available for each difficulty. A strange situation – especially for a game that could easily have easily supported randomly-generated levels.

We may have been a little disappointed by how frequently the levels were re-used, but there’s no denying that those stages make De Blob Revolution a fantastic thinking person’s puzzler. Sharp wits and quick fingers are the name of the game here, and if you don’t have either it’s time you learned. If you’re looking for a game that tests your ability to think on the fly, De Blob Revolution should fit the bill nicely.