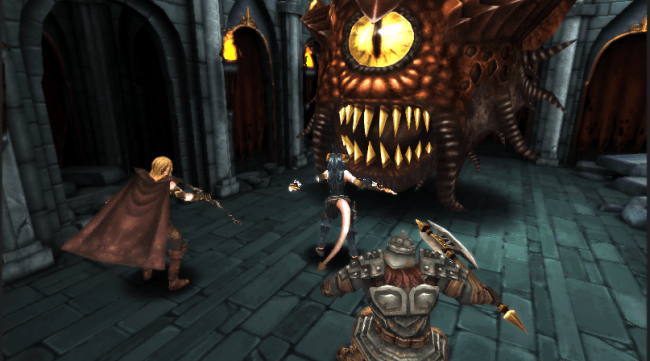 D&D: Arena of War looks great, it sounds great, and who doesn’t relish the idea of battling their way across the fabled Sword Coast of Faerun during the world-changing events of the Sundering? But in the end, it’s a deep disappointment, brought low by the absence of one fundamental component necessary to any good D&D game: the actual D&D.

My time with D&D: Arena of War did not start well, as the game struggled with a post-install asset download that took much longer than expected and timed out twice, but I started to feel some optimism once things got going. It’s a tad cramped on an iPhone screen, but even so it looks fantastic; and while the initial character creation is dramatically simplified – you can select from a number of pre-made race/class combinations (although some of the more exotic combos must be unlocked before they can be used) and adjust gender, hair color, armor, and gauntlets – that’s not necessarily surprising in a combat-focused mobile game.

My excitement grew as I started to play. D&D: Arena of War is set on the Sword Coast, a region of Faerun that will be pleasingly familiar to veterans of the famed computer RPG Baldur’s Gate. Your adventures begin with a simple quest against some Kobold troublemakers in Beregost, a town that makes an early appearance in Baldur’s Gate, and I was very much looking forward to the opportunity to once again walk its streets.

Things began to careen wildly downhill, however, when the combat began. To attack an enemy, you touch your character’s avatar on the top-down screen and then drag opposite the direction you want him (or her, as the case may be) to travel, Angry Birds-style. Lifting your finger “launches” him, and when he makes contact with an enemy, he strikes it and does damage. It’s a bit like the digital equivalent of shooting elastic bands at your teacher, I suppose, except instead of elastic bands you’re flinging a half-orc barbarian. There are also brightly colored (and highly explosive) orbs on the screen which will blow up should you or your opponents be knocked into them, and although I’m not sure what they’re supposed to be, they’re handy for killing multiple enemies at once if you can angle your shots appropriately.

The number and power of your enemies grow as you get deeper into the game, and you can seek help from other players, whose characters can join yours to form very small adventuring parties, but otherwise, that’s it. There are powers you can collect and special attacks you can employ to make yourself more powerful, but the basic “pull back and release” mechanic is the core of the combat experience – and it turns out that it’s really not D&D at all, but just a slightly more interactive twist on the collectible card game genre.

Much like those games, D&D: Arena of War uses “energy” to limit the amount you can play without paying, and it’s very stingy in that regard. You have 100 energy points, which may sound like a reasonable amount, but the very first series of quests in Beregost costs ten points each (a single battle, comprised of two or three rounds, counts as a “quest”) and that number increases as you go. Energy is recovered automatically at a rate of one point every three minutes – a full half-hour to recover enough energy to do a single, first-level quest, in other words, which will take you about 15 seconds to complete.

Of course, energy can be restored much more quickly by way of potions, which can be earned by playing the game and also purchased through the in-game store. A full energy potion costs 100 gold, which sells for 99 cents, and while discounts apply to larger volume purchases, the bottom line is that you better be prepared to play in very small chunks if you don’t want to fork over the dough. At the same time, you’ll almost certainly have to replay previous areas in order to increase your level and power, but the limited energy tightly restricts how much grinding can be done – and, again, how quickly you can advance through the game. 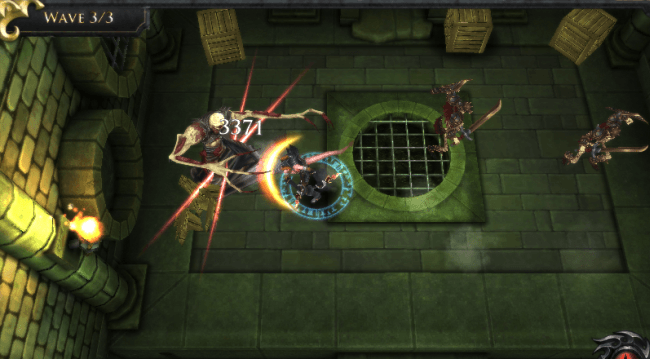 D&D: Arena of War is much like a CCG in other aspects as well. In-game rewards are earned by logging in on a daily basis, you can request assistance from other players to get past tough areas, and special powers and scrolls can be “fused” together to give them more of a punch. Yet it lacks the element that makes those games so addictive – the collector compulsion – and the interactive combat doesn’t even come close to making up for it.

I wasn’t expecting D&D: Arena of War to be the next great role-playing game, but I certainly had higher hopes than this for the first officially-licensed Dungeons & Dragons mobile game: some stats management, perhaps a touch of role-playing, and a story to tie the whole thing together. Instead, it’s just a twist on the CCG genre that trades on the name – and that even as a free-to-play game just isn’t worth the effort. D&D fans deserve better.