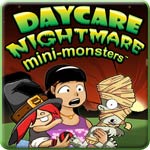 Releasing Daycare Nightmare: Mini-Monsters right before Halloween will get any player into the spirit fo the holiday. Except that the monsters in this time management game don’t wear disguises, they’re real monsters. Some of them, however, wear human disguises as more move into the suburbs where humans live.

Molly has become the monster mummy and daddy’s best friend and baby caretaker. The monster families trust her, but they’re leery of other humans – especially the agents from Bureau of Out of Ordinary Operation a.k.a. B.O.O.O.

This sequel to Daycare Nightmare contains very little enhancement that we could almost use the original review for this. The biggest addition is five new monsters including witches, werewolves, monkeys, mummies, and non-monster agent babies. A couple of baby monsters return from the original like vampire, ghost and blob.

Each baby has a skill that could make work harder for Molly if she doesn’t take care of their needs fast enough. Witches switch babies around the room. Werewolves scare babies into changing their needs. Monkies shake up the room to make it harder for Molly to navigate and work. Mummys curse Molly so that babies transport when she attempts to pick them up. When things turn frenzied, strategy plays a big role. Molly has to prioritize which baby she’ll help first based on the ones that cause the most harm.

To Molly’s horror, she must deal with agents from the local B.O.O.O. bureau. Actually, Agent Rand wins as the difficult one while Agent Connor takes a liking to Molly and tries to help. Tut also gets in her way as Molly tries to build a new daycare on land he wants. And a secret informer who goes by the name "Deep Change" spills the beans to B.O.O.O. about her business taking care of monsters.

While she builds the new daycare center, B.O.O.O. forces her to move around six times to avoid the agents from catching up with her monstrous business. The locales range from monkey house and B.O.O.O. to Wolf Den and Pyramid. With every move, the atmosphere changes as do the furniture to prevent the game from turning too tedious. Nevertheless, it tends to feel monotonous since it has little variety in its 50 levels.

Every baby plays with a different toy. Witches play with brew, werewolves chew on bones and agent babies play with toy guns that look like drills. Molly also befriends Melinda, the owner of the monster baby store where she buys upgrades. But it takes a lot of money to earn upgrades. By the end of the game, we were still missing some items.

The press release indicates two modes come with this one: Story and One Hectic Day. But we could not find One Hectic Day. Had it been included, it would’ve provided the game with replayability. Furthermore, when we finished all 50 levels, our profile disappeared.

The day grows longer as Molly advances. Early on, the day ends by 4pm and later on, it goes past 7:00pm. It doesn’t take much to lose a level — all Molly has to do is have no happiness left and this only happens a few times near the end. This helps the game attract families with younger kids who will enjoy this. Good news: the game’s difficulty grows based on your gameplay. It does a great job with our skill level. The game doesn’t become frantic until around fifth or sixth location.

Chaining works better than in the original, but it still doesn’t take much to find Molly doesn’t have a monster or fail to make the swap from one baby to another despite clicking. The doorbell and baby cries continue to grate. Sure, these sounds drive parents crazy in the real world, but it could be less annoying. Sounds provide important cues letting Molly know when a baby needs something or feels better, or another baby arrives or the baby’s parents have come for pick up. What happens if a family mutes the sound? It could cause problems when you don’t have audible signals as your eyes won’t catch everything.