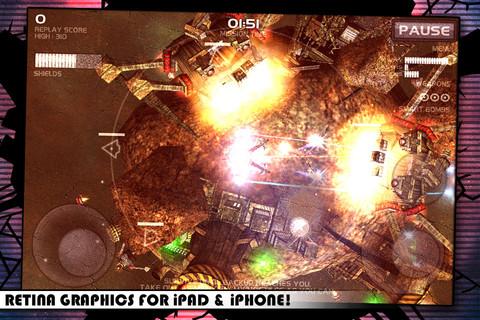 A meaty game that might be a little too filling

Reviewing games can be hard, especially when they’re free or cost less than a Big Mac.  Sometimes a game will jump out to you and scream, “I’m awesome!”  That makes it easy.  Likewise, a game can scream, “I’m terrible!” When games do neither though, evaluating them can get a little muddy.  It’s hard to judge too harshly a game that costs less than bus fare.  It just feels wrong.  But at the same time, if I don’t have much fun playing a game, that should be a major part of my evaluation.  This is how I feel about Darkside.  Dilemma might be a slightly dramatic word for my current situation, but I’m going to use it anyway.

Darkside is a good game.  It looks good, it controls well, and it’s a bargain.  I just didn’t have much fun playing it.  But I’ll get into that later.  First, let me tell you what Darkside is.

Darkside is a 3D two-stick shooter with a couple notable twists.  Instead of action taking place on a flat plane like most two stick shooters, you navigate your Arclight x-52 across the semi-spherical surfaces of asteroids.  Each level in the campaign brings a new asteroidal to explore.  Not only is this visually impressive, but it also influences how the game is played.

As you’re flying around an asteroid blowing things up, you never have a full view of your surroundings.  Some enemies and objectives will be on the far side (darkside?) of the asteroid while you’re taking care of business on the other.  Luckily, an intuitive HUD clearly indicates the locations of all enemies and objectives on the screen.  This HUD, combined with important audio cues, ensures that you will never feel left in the dark.  If you miss something it’s your fault, not the game’s.

The other big twist isn’t quite as complex as the last.  Alongside the bad guys in Darkside, each level usually throws a cloud of smaller, secondary asteroids at you.  Like the arcade game of yore, crashing into these asteroids chips away at your health, and exploding them breaks them into smaller asteroids that must be destroyed in turn.

To aid you in your campaign of destruction, killing enemies sprinkles a number of nifty power ups across levels.  Spread shots, lasers, and missiles up your firepower significantly, and, unlike most two-stick shooters, conserving the ammunition of these power ups is paramount.  Darkside gets a welcome injection of strategy from the judicious application of your weapons.  When you hold your thumb down and fire madly, it isn’t long before you run dry and remember how useless the Arclight’s main weapon is.

Unfortunately, that’s about as deep as Darkside gets.  The 100-level campaign introduces a new objective every couple of stages.  These objectives include protecting crates from thieving ships, guarding power stations from imminent destruction, and destroying all asteroids on the map.  As the campaign continues, Darkside starts stacking objectives instead of creating new ones.  Before long, you’ll have to defend two power stations, six mineral crates, and four beacons while destroying asteroids… all at the same time.  With so many objectives at once, action becomes a blur.  Eventually, I found myself madly flying around the asteroid until I either won or lost.  This is not fun.  It became a grind very quickly.  New enemies are introduced over time and the occasional boss fight breaks up the monotony, but it wasn’t enough to keep me happy. 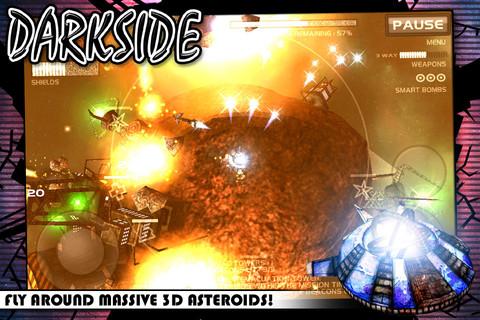 I hate to judge a game for what it isn’t, but if Darkside’s grind had a pay off it might not have bothered me.  If there was a leveling system that allowed me to upgrade my ship, or even a store between levels where I could buy power ups and extra lives, I might not have begrudged the grind.  But as is, Darkside became boring.