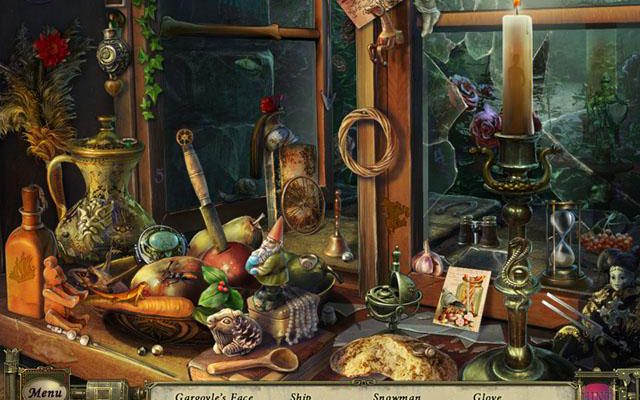 Follow a mysterious black cat to discover the fate of a missing woman in this polished HOG/adventure hybrid.

Dark Tales: Edgar Allan Poe’s The Black Cat has a long name but a simple plot: You and your partner, Inspector Dupin, are called to the home of one Mark Davies to investigate the disappearance of his wife, Sara. Oddly, people claim to have recently seen Sara on the estate’s grounds, usually in the company of a mysterious black cat – a cat that seems more than a little otherwordly. No matter if this is a simple missing persons case, a huge misunderstanding, or something more sinister, you and Dupin shall discover the truth!

As with just about any missing persons case, your first step is to search the victim’s home, and it won’t take you long to discover that something is not quite right. The few parts of the mansion that haven’t fallen into extreme disrepair have been locked, blocked, sealed, or otherwise made unaccessible. It seems that despite claiming to be concerned about his wife’s fate, Monsieur Davies isn’t particularly interested in helping your investigation. The cat, fortunately, is far more agreeable, and leads you through the house to various clues and locations that bring you ever closer to the truth. 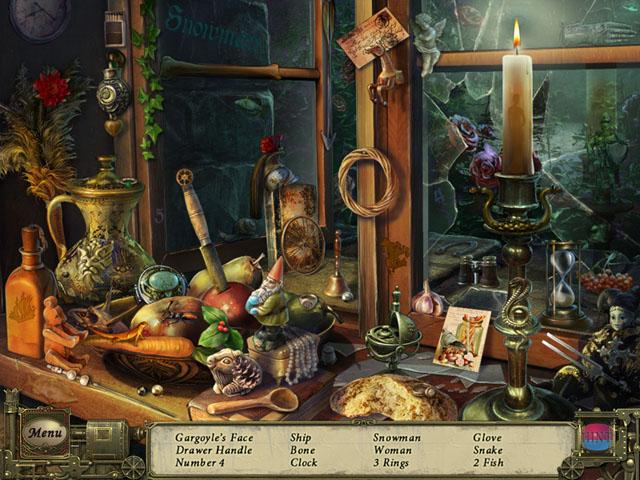 The Black Cat is a blend of hidden object sequences and adventure-style puzzle solving. Each hidden object scene will produce an inventory item that you’ll need to overcome one of the houses many obstacles. Everything – and I mean everything – in the house is locked, in pieces, or rigged somehow. You can’t so much as get a glass of water without first tracking down at least one object to make it happen. The Davies estate is extensive, and virtually every location has several different areas of interest, most of which you’ll have to visit more than once.

The hidden object sequences are lovely, as is all of The Black Cat, but can be frustrating if you forget that you can interact with certain items in the scene, such as tapestries that can be pulled back or boxes that can be opened. Your cursor changes into a hand when it rolls over something that can be moved, but it can still be quite easy to overlook or forget. Nothing sucks the fun out of a hidden object search faster than using a hint in baffled desperation, only to discover that the heart you couldn’t find was stuffed out of sight in the teddy bear’s head. The searches also tend to rely on the same objects – Monsieur Davies clearly has a fondness for bells and scissors – but the individual locations are so different that it shouldn’t bother you too much.

The Davies estate is expansive and gorgeous, but navigating it can prove problematic. Even in Relaxed Mode, which throws helpful sparkles at you, there are certain doors and paths that are easy to miss if you’re not paying close attention. More than once I sat stumped, only to belatedly realize all I had to do was open a door that I’d overlooked. The more of the house you explore, the more backtracking you’ll have to do as you locate the various bits and doodads you’ll need to solve puzzles, and while your journal does its best to help you keep track of everything, it wouldn’t hurt to keep a notepad by the computer, too. 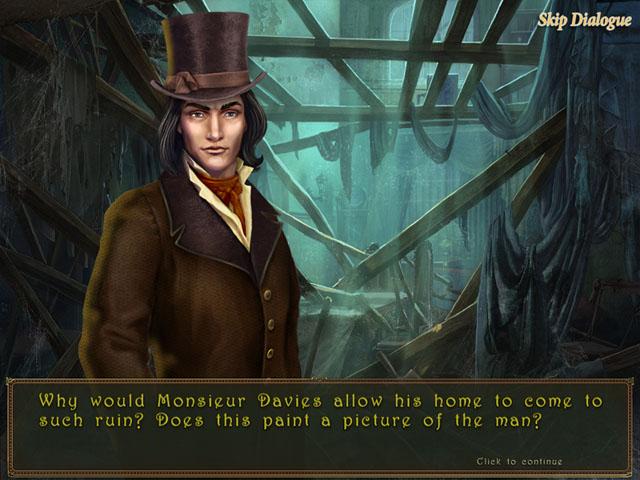 The puzzles of The Black Cat are a mixed bag of elegant, aggravating, and ho-hum, though which you consider to be which depends largely on your personal taste. Even those that have been done to death, such as sliding tile puzzles, have been given stylish tweaks to make them a bit more refined, such as one that requires you to shuffle three marked tiles to specific spots to open a lock. My personal favorite involved some twitchy tile flipping, basic chemistry and logic – a nice combination brain teasers in one neat package. All of the puzzles are skippable, so if you come across one that doesn’t suit your taste, you can opt out and get back to searching for Sara.

Dark Tales: Edgar Allan Poe’s The Black Cat has a solid mystery, lovely visuals and plenty to do, but it feels a bit off balanced. No sooner have you conquered one complex puzzle then you’re smacked with another one; you rarely feel like you’re actually exploring, rather just stuttering a few steps from one locked door to the next. When combined with the vast amount of backtracking the games’ puzzles require, the result is somewhat like being in stop-and-go traffic. The game, which rewards you with extra content for finishing, is ultimately worth the effort.