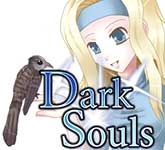 Nowadays a lot of role-playing games are trying to find the next new thing that will bring gamers in hordes to their door step, but truthfully all many of us want is the basic, old school RPG system we loved from when we were kids. Dark Souls is one of those games that tries to follow in the footsteps of "classic" role-playing game formats like the Aveyond series and the early Final Fantasy games, but fails for so many reasons – let me count the ways.

Created by Warfare Studios on the RPG Maker XP system, Dark Souls is a throwback to the old school days of role-playing with turn-based battle systems. The game has you following Gauly, a wanted man who after evading the guards finds himself in a small town which is under the thumb of a power church. This church ends up hiring Gauly to escort a priestess, Ashley and her mentor, Tessa to a temple to perform a ceremony of salvation. Of course, nothing is as simple as it seems and soon Gauly is caught up in his own criminal problems again plus the war between the church and its defectors.

You have your battle system controls and overworld controls. While in the overworld, you can move your character via the arrow keys, enter your menu with the esc key and talk to people with the enter key. While fighting a monster, the in-battle system gives you a list of commands to choose from like fight or flee. Each character in your party gets one turn per round of battle to make a selection from the command list as does the monsters you’re attacking each get a turn to attack. Once each person and monster uses their turn, a new round starts and everyone gets a new turn.

Characters can use magic and items during the battles but they can only use as many items and magic spells as they have mana points (MP) or items to use. The battle is over once each monster runs of hit points (HP) or your characters run out of hit points in which case, the game is over.

At the end of each battle, your character earns experience points which build up towards new spells, skills and levels stats. With each new level, your characters will become more powerful in battle and possible earns a new skill.

Monsters battles are found at random in places like dungeons and fields, so be prepared when you head out from towns. Towns are your main source for items, new weapons and armor. Using the gold you earn from monster battles, you can buy new gear from stores found in the towns.

I’ve played a lot of role-playing game in my time and Dark Souls doesn’t stand out against retro remakes or retro new-makes. Sure, if you want a decent storyline, Dark Soul gives you an alright story of a hero fighting against a corrupt organization. The battle system is nice and basic; easy to pick up for a new player to the world of role-playing games, however I wouldn’t suggest this as the first RPG game to a person looking to get into the genre.

The graphics don’t seem to have a unified art theme. The overworld objects and battle characters are created with a pixelated look to them, while the enemies you fight look like they were painted in Adobe Photoshop and then smeared with the blur tool for a fancy artistic look. The portraits that appear in the dialog boxes look like they were hand drawn badly in MS Paint and they look nothing like the overworld characters they are suppose to represent. I understand this was an indie game so the graphics can’t be top notch, but why keep changing the art design from item to item?

The music was comprised of stock midi music found within the RPG Maker XP system and was not created by the Warfare Studio. I was completely disappointed to find this out because the music was actually one of the decent things about this game. Knowing they took the time to create custom art and sprites for this game but failed to make any original music whatsoever for this title really feels like a waste. Why bother making a game if you aren’t going to put make it 100% your own?

The errors in this game were also atrocious. There were spelling mistakes, grammar errors, overflowing dialog boxes and awkwardly phrased sentences that didn’t seem to fit. The worst mistake seemed to be the use of "of coarse" instead of "of course." If you are going to spend all this time to make a game, at least use a spell checker on the dialog.

Dark Souls will give you about 15-20 hours of gameplay, which gets extremely hard near the end of the game. There is a lot of walking in this game and a lot of random enemy battles. There is a free 60 minute demo for those of you want to check this game out for themselves, but anyone except diehard RPG fans might find it tough going.