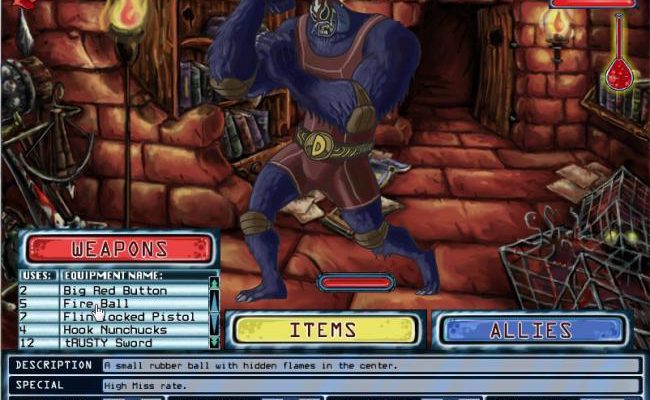 Everyone is familiar with the conventions of most role-playing games. They’re handy to keep in mind when you first fire up the sci-fi RPG Dark Scavenger – but only if you forget about them right away, because they won’t do you much good. Psydra Games has put together a point-and-click adventure that thumbs its nose at the status quo and stays true to its own offbeat narrative.

If this writer can be permitted just one spoiler, you know you’re in for something different when the game begins with your character floating in space while you learn the game mechanics by battling a powerful, shapeless entity. Once you inevitably lose that battle, the arrival of three strangers to save you from floating helplessly in the void for all eternity kicks off this unique story in earnest.

The saviors are an eclectic group, to say the least. There’s Kamaho, a scary-looking but friendly skeleton with a crossbow, Falsen, whose appearance and behavior remind you of a green-skinned Joker, and Gazer, a pretty close facsimile of the titular creature from Aliens. These three odd amigos roam the universe looking for ways to help others, but now they need your assistance to repair their damaged ship. By their own admission, the aliens are good at crafting things but horrible at fighting.

Getting down and dirty with your character is easy thanks to the game’s point-and-click interface. Simply click on the weapon you want to use, click on a target and voila: instant success or failure. Yet there’s an unavoidable strategic element that rewards careful thinking, as each weapon can only be used a certain number of times per quest before they degrade and are unavailable. As the great Indiana Jones once had to do, you’ll need to choose wisely. 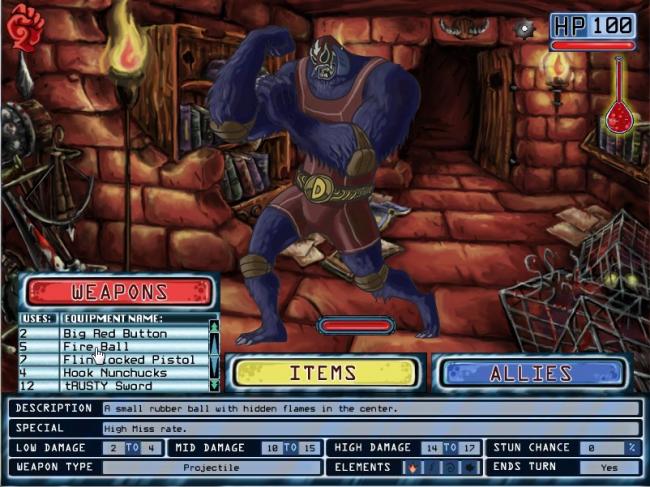 The boss battles can be a little more involved, sometimes blending with Dark Scavenger’s menu-based dialogue system. Even out of combat, the script is a real highlight, showing off a sense of humor that goes from clever to slapstick to just plain weird. Decisions you make in conversations have a definite impact on many encounters, especially if you go with the tough guy, I’m going to destroy you option that is almost always there.

Should you triumph in battle, you’ll often receive strange, occasionally random loot. Other goodies can be found by carefully exploring the clickable components in each room, though you may have other decisions to make before gaining (and sometimes losing) these treasures. Any piece of loot can be taken back to the ship, where, depending on the crew member you give it to, it can be transformed into a weapon, an item or an ally that can be summoned to aid you in combat. Like your starting gear, all crafted rewards only have a limited amount of charges. 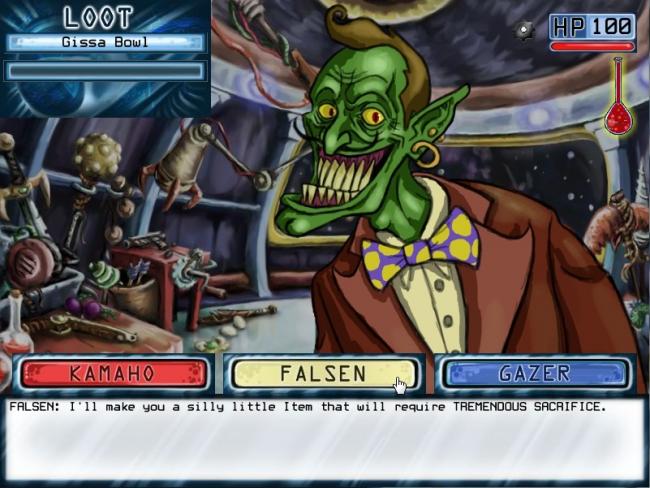 There’s a fun story that unfolds as you go about your scavenging, but that might not be enough to prove fulfilling if you can’t get past the fact that all quests basically involve searching room by room, clicking on everything and fighting any baddies that might pop up. The lack of actual moving graphics also undoubtedly will prove too stifling for some.

On top of that, Dark Scavenger is fairly short, but replay value is still a strength thanks to the many things you can craft and the opportunities you have to try different tactics during certain encounters. It won’t be everyone’s cup of tea, but five dollars (conveniently, the price of the game at the time of this writing) says it will make you think to yourself, “That’s different,” more than once. There are plenty of games out there, RPG and otherwise, that can’t make that claim.