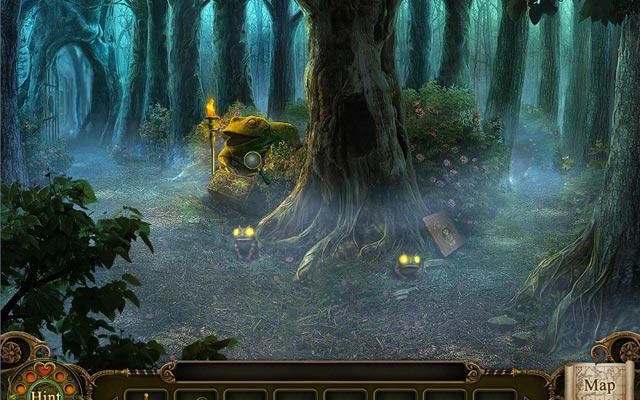 Dark Parables: The Exiled Prince isn’t perfect but it is very, very good

The Frog Prince may not be the first guy who leaps to mind when you think about intimidating fairy tale villains, but he’s up to some pretty serious badness in Dark Parables: The Exiled Prince, the impressive new hidden object game from Blue Tea. People are mysteriously vanishing as they stroll through the woods and it’s up to you to find out why – and to put a stop to it once and for all.

When the Chancellor’s daughter and her bodyguard go missing in Germany’s Black Forest, the Frog Prince is at the top of the suspect list. To bring her home, authorities turn to the specialist who closed the case on The Curse of the Briar Rose. That person is you: the Detective. Why they didn’t deploy a few military search and rescue teams and every police department within 50 miles is a bit of a mystery – this is the Chancellor’s daughter, after all – but hey, who cares? The job is yours! 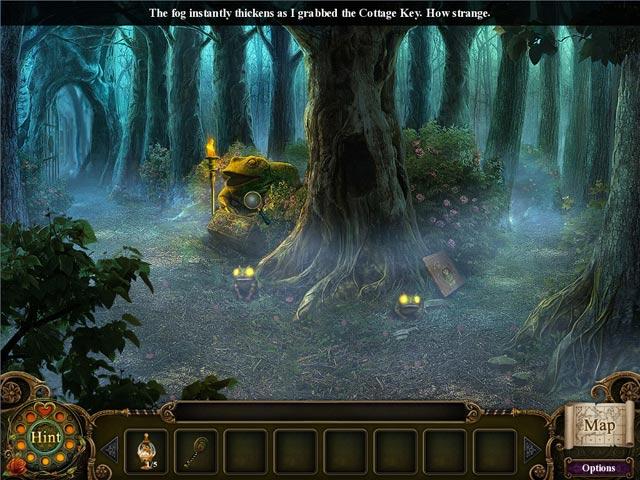 In most meaningful ways, The Exiled Prince is very much like Curse of the Briar Rose, the first Dark Parables adventure. It’s a full-out “fragmented object game,” with no conventional hidden object scenes to be found anywhere. Instead, every scene will have you scanning for parts of various inventory items, both mundane and magical, that will be used at some future point in the story. It’s an interesting approach to the hidden object genre, but by sticking exclusively with fragmented object searches the gameplay can feel a little simplistic and shallow at times. Your mileage may vary, but by their very nature FOGs (or in this case, perhaps, FROGs) are less about searching for items hidden in bizarre environments than about simply scanning scenes looking for anything out of place. Most players will likely refer to the list of needed object fragments only rarely, after the obvious pieces have been picked up.

But with the bad comes the good and like Briar Rose, The Exiled Prince is very good indeed. The game is visually stunning, set in a fairy tale world divided between the murk and menace of the Black Forest and the magical underground realm beneath it. Nearly every scene includes one or two randomly interactive items that help bring the game alive, like frogs that hop or spiders that scuttle when you click on them, while nicely animated interludes pop up every so often to push the story ahead. The audio side of the coin is slightly less impressive; the music is pleasant and the background sound effects are subtle and effective, but the voice acting never rises above serviceable.

Along with the usual search scenes, The Exiled Prince also includes 20 “cursed objects” which change form when clicked. The trick is that there is absolutely no hint as to what these objects are; a few stick out like sore thumbs while others are almost entirely nondescript, such as a single wood panel in a wall. (Consider that a hint, by the way.) There’s no penalty for unsuccessfully clicking on everything in sight so finding them all is really just a matter of time and patience, and it’s worth the effort to track down at least a few. Each cursed object found shortens the hint recharge timer and although the effect is slight individually, once you’ve found a dozen or so it actually becomes quite pronounced. I managed to dig up 13 of them, mostly through luck rather than determination, and with that many under my belt my hint timer was recharging in scant seconds. 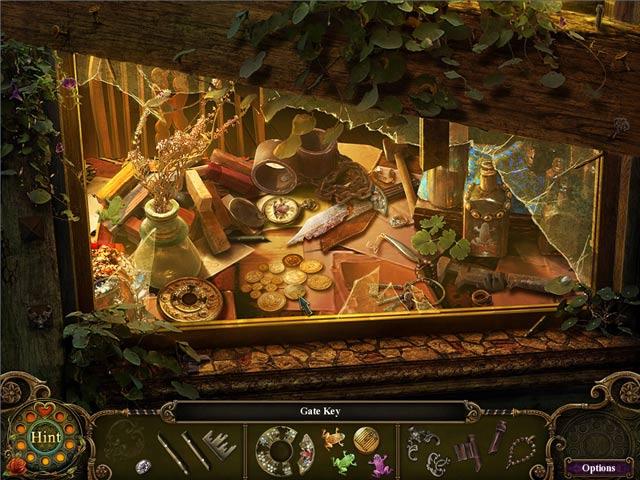 As you’d expect, a number of puzzles are scattered throughout the game. Most of them aren’t particularly difficult and a “skip puzzle” option is available for players who don’t have the patience to work through them. Unlike most games, which force you to wait a set amount of time before they’re allowed to skip, the skip button is available immediately in Exiled Prince. But there’s a catch: if you skip a puzzle, you won’t be given any regular hints for a full five minutes. It’s an unusual approach, but I like it. If that doesn’t appeal to you, however, a built-in strategy guide will take you through everything, step-by-step.

There’s a lot of back-and-forth between scenes in The Exiled Prince, with object and evidence searches opening up at various locations as the game progresses, but although the well-detailed map will show you exactly where you need to go to complete your tasks it doesn’t offer direct point-to-point transit. Adding to the inconvenience of all that running around is the fact that the map layout is a little on the confusing side. Maybe it’s just me, but more than once I found myself uncertain about how to get where I needed to go, even with the map to guide me.

Another oddity that may put off hardcore HOGgers is the absence of a selectable difficulty level. Two levels of challenge are available but the first playthrough must be done at normal difficulty. Once that’s completed you can try your hand at “Hard mode,” which opens up a few areas that are inaccessible at the normal level, as does a bonus chapter that pushes total playtime to around the four hour mark and lines things up for the next Dark Parables game. Completing the bonus chapter opens up all the Collectors Edition goodies: wallpapers, a soundtrack that can be saved and played outside the game, concept art, a movie gallery and a handful of bonus puzzles. It’s a good selection of extras and a nice reward for getting the job done.

Dark Parables: The Exiled Prince isn’t perfect but it is very, very good. With first-rate production quality, an intriguing story and plenty to see and do, this is a game that should keep hidden object fans happy and hunting for a good long time.