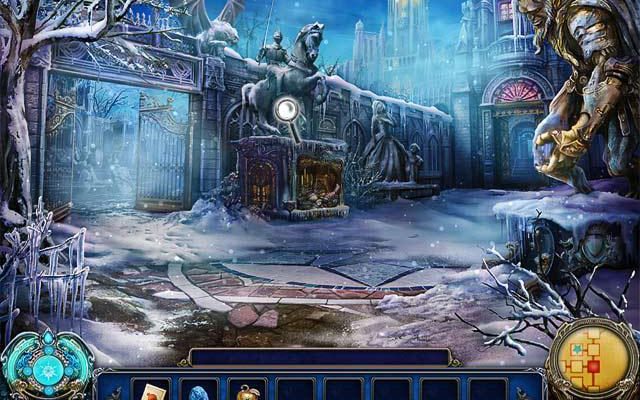 Blue Tea Games has done it again with Dark Parables: Rise of the Snow Queen, the latest fairy tale to be turned on its ear with a dark and sinister “re-imagining” as a hidden object game. In this version, the Snow Queen threatens to entomb the whole world in the dead grip of winter, and only you can stop her. But before you can figure out how she’s going to do it, you’ll have to untangle why. Will you be able to discover her secrets before it’s too late?

If you’ve played either of the previous Dark Parables games, Curse of Briar Rose or The Exiled Prince, you’ll be right at home in Rise of the Snow Queen. Numerous fragmented object searches, interspersed with a relatively small number of fairly simple puzzles, are once again the name of the game. Everything is hand-painted and while it’s not quite photo-realistic, it’s still gorgeous and even exudes a certain artistry that more “realistic” games sometimes lack. The soundtrack is lovely, distinct but not distracting, and quite pleasant to listen to on its own – which you’ll be able to do eventually, since this is a collector’s edition. But you’ll have to do a bit of work for it first. 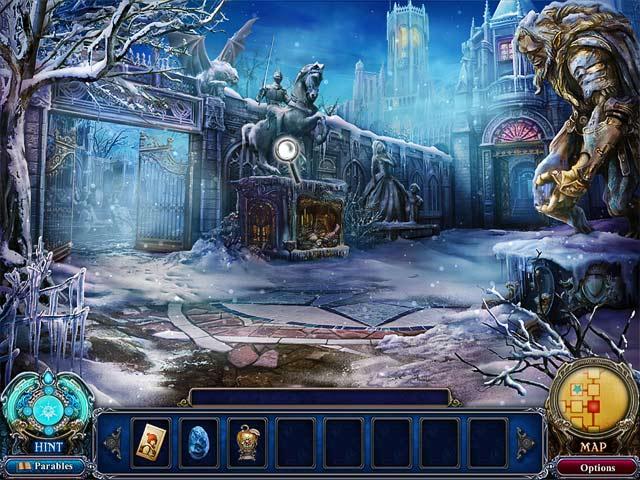 In fact, the biggest knock against the game is that there’s almost nothing new to it. Rise of the Snow Queen is really just a rehash of the Dark Parables formula, so points for originality are not going to be handed out. And it’s not just the basic gameplay that’s nearly identical: like The Exiled Prince, this game features 20 well-hidden “cursed objects,” each of which will shorten the hint recharge timer ever so slightly, and skipping any in-game puzzles leads to a five-minute lockout of the hint function. Even the voice acting is similar: adequate but nothing that’s going to win any awards.

On the other hand, taking the excellent Dark Parables formula for another spin around the block certainly isn’t the worst idea for a videogame anyone’s ever had, and Rise of the Snow Queen does add a few of its own touches. Collecting “parable gems” will unlock several short stories explaining the origin and history of the Snow Queen, a tale of woe that includes an admittedly fun connection to another familiar member of fairy tale royalty. And while I could be wrong on this – it’s been almost a year since my last romp through a Dark Parable, after all – it feels like this game brings more, and more impressive, cut scenes and animated interludes than its predecessors.

It’s also a very fast-paced game, in no small part because it’s a relatively simple one. One or two of the puzzles may leave you scratching your head for awhile but generally speaking they’re not going to hold you up for long, and the fragmented object scenes are pretty easy to blow through as well because many of the parts tend to stand out from the background and can be found without even looking at the item list. Of course, the casual level is considerably easier than the hardcore mode, which allows no hints, puzzle skips or visual cues to interactive areas; a normal setting in between those two extremes allows players to turn up the challenge a bit without having to resort to all-out masochism. 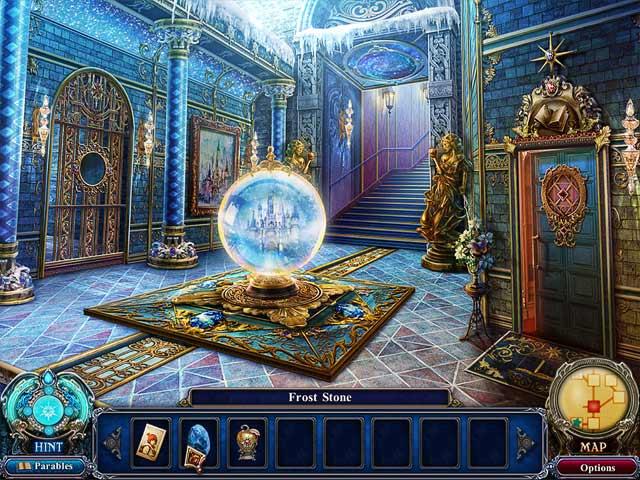 The obligatory Collector’s Edition bonus chapter is actually a separate game, Dark Parables: Hansel and Gretel, which adds about another hour to the roughly three hours of Rise of the Snow Queen and is very (very) loosely tied to it. You’ll also get wallpapers, concept art, a “movie gallery” of all the videos in both games, direct access to all puzzles and the six song soundtrack, which can be saved for later enjoyment. It’s a healthy mix of extras with just one catch: you’ll have to beat both Rise of the Snow Queen and Hansel and Gretel in order to access everything else. Hey, I told you you’d have to work for it.

There are two or three examples of spotty English, nothing overly awful but clunky enough to be noticeable, and I’m tempted to aim some criticism at the story, too – but did you hear the one about the pumpkin that turned into a royal carriage? Fairy tales don’t have to make sense, so I suppose it’s not “fair” (get it?) to hold them to a higher standard of logic and rationality just because they’ve been adapted for a hidden object game, which, since we’re on the topic, aren’t exactly known for their narrative cohesiveness either.

So why even bring it up? Because the truth is, there’s just not much else to complain about. Originality is lacking, so spend your money elsewhere if you’re looking for something fresh and new, but if what you’re after is a rock-solid, tried-and-true hidden object adventure, then Dark Parables: Rise of the Snow Queen is not to be missed. Oh – and be sure to watch the closing credits!