Visuals arenâ��t so tight. Youâ��ll need to spend real money if you want to see the end anytime soon.

The MMO Legends series continues, this time with blood-thirsty vampires

Spacetime Studios continues its mobile MMO Legends series with their latest release, swapping space and fluffiness for a rather different, more violent angle. Dark Legends puts you in control of a bloody-thirsty vampire, on a quest to find the culprit responsible for your fangs.

There’s a tried-and-tested formula running through this MMO series, and the developer knows it would be silly to mess around with it too much. Still, while Dark Legends doesn’t bring anything new to the table, it’s remarkably entertaining and has us enthralled for quite some time.

The game may be about chomping on flesh to reach the arteries underneath, but Dark Legends‘ hero is actually a nice vampire, if there’s such a thing. All he wants is revenge on whoever turned him into a vampire, and whenever he needs to feed, he simply has a bit of a nibble on a human and then sends them on their way with a polite “sorry.”

Dark Legends is made up of numerous campaigns filled with story-based goings-on and hack ‘n’ slash action. The world map shows a string of missions to complete, and you need to spend your energy points on wrapping these up one by one.

Missions come in two forms. Either you’ll be asked to spend your energy and then wait a set amount of time for the mission to be complete, or you’ll be thrown into a more hands-on scenario, with zombies and demons to cut into pieces. With a virtual d-pad, numerous power buttons and wide-open exploration, it’s mindless but exciting fun, especially when you bring other players in and work together. 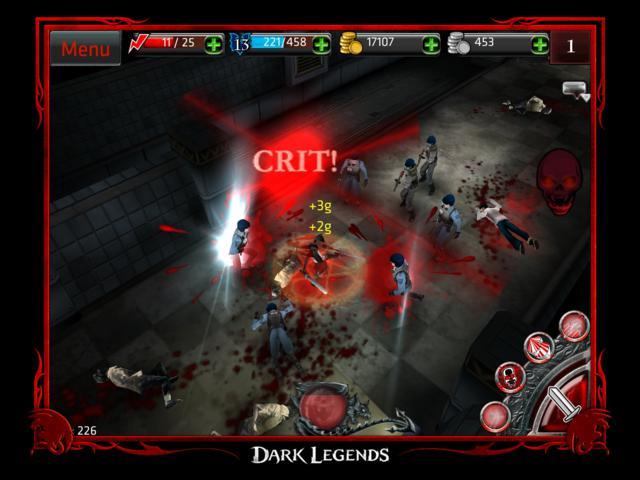 There is a serious amount of customization along the way too. As you level up, you’ll earn experience points which can be funnelled into different special moves and statistics via a skill tree. You’ve also got achievements to unlock, perks to collect and assign, and weapons to equip and sell.

That’s not all – head down into the city, and you’ll find a long-stretching road filled to the brim with online players and shops. Each shop has vanity items, which can be purchased with in-game currency or real money, and give your character that special edge over the standard dull threads you’re initially offered. The city also houses player vs player arenas, although these aren’t as entertaining as the main co-operative play.

But despite the fun we had, there are a number of factors that went against our enjoyment of Dark Legends. First off, once you’ve passed the first chapter of the game you’ll find yourself waiting around a lot unless you’re willing to fork out real cash. Missions begin to cost a lot of energy, and you’ll have to keep going back to the game every hour or so to continue.

The visuals are also a talking point, as they haven’t really advanced since either Star Legends or Pocket Legends, with rough blocky edges throughout. Dark Legends tries to be graphic, with blood spilling all over the place, but it doesn’t really look much like blood at all, for better or for worse.

Dark Legends is another successful MMO release in the Legends series, and one that will no doubt gain the developer an even larger fan base. If you’re willing to put down a few dollars here and there, it’s a massive game to sink your teeth into.