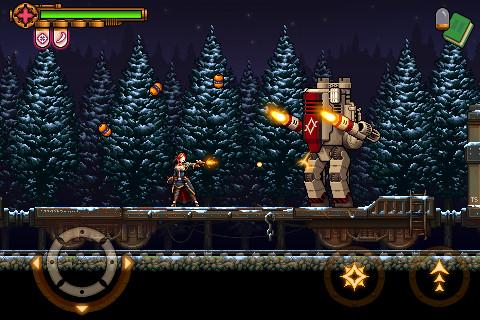 One of my biggest gripes in recent years is that Konami still hasn’t brought a proper Castlevania game to the iOS platform. The series has already proven itself a mobile success time and again through countless GameBoy Advance and Nintendo DS releases, but for some reason Konami hasn’t mustered up the courage to bring the formula to the App Store. Drag your feet too long, though, and somebody else will always beat you to it. Such is the case with Dark Incursion, a game that draws great inspiration from the Castlevania formula, yet isn’t without a few tricks of its own.

Developed by Big Blue Bubble, a company primarily known for quick-play casual hits like Burn the Rope and Fling a Thing, Dark Incursion marks a bold step for the company. Rather than putting together a title designed for 30 second consumption, Dark Incursion is a rich platforming adventure that you’ll likely find yourself in front of until your battery runs out. It’s a big deviation from the norm for Big Blue Bubble, but it works.

Set in an alternate 19th century with a steampunk vibe, players will control Anya, a woman intent on stopping biological experiments that the military is performing in an attempt to create super soldiers. To do this, she’ll need to take on an army.

Like the Castlevania formula (or Metroidvania if you prefer), Dark Incursion is largely about two things; action platforming and obtaining new items that can help you access previously explored areas. The “obtaining new items” part of this equation is handled in quite a nifty and original manner. Anya wears two gauntlets, and combined these gauntlets offer four slots for different fuses. These fuses power everything Anya does. There are fuses for her gun and sword strengths, fuses for special power-ups like reduced damage or faster movement, and fuses for elemental powers like ice and electricity.

Different fuses are going to be what allow you to backtrack and access previously inaccessible areas. Need to power up an elevator? Give it a quick zap with your electricity fuse. Need to reach a high platform? Make a big fist out of ice to climb up on first. You’ll find these fuses, as well as other important items like keys to open locked doors or items used to move the story forward, by searching a variety of objects throughout the game. Dressers, boxes, coat racks – so long as it’s highlighted to indicate something’s in there, you can search it.

What makes things even more interesting is that most of these fuses have a limited number of uses. Once they’re used up, you’ll have to find more. This can theoretically lead to situations where you’ll need a specific fuse to get through an area, but because you weren’t careful, you no longer have it in your possession. Mind you, I say “theoretically” for a reason. If I was ever in dire need of a certain fuse, it always seemed to play out that I’d get one from a desk or a fallen enemy only moments before it was needed.

In terms of presentation, Dark Incursion looks great, if not eerily familiar. It seems as though here, even moreso than in its gameplay, the game seems to draw a tremendous amount of inspiration from the Castlevania series. Not that this is a bad thing, mind you. The style of the games like Aria of Sorrow was tremendous, and Dark Incursion echoes that perfectly. It’s also worth noting that they’ve copied the style here, but not the art. Everything in Dark Incursion is original and dripping with a unique personality – but if someone had told me the same artist worked on both series, I wouldn’t have batted an eyelash.

The game also supports a stereoscopic 3D mode, meaning you if you have a pair of red/blue glasses kicking around, you can add a little oomph to the proceedings. We had a chance to try this, and really, all that happens here is the foreground pops in contrast to the background. It looks nice and all, but do we really need stereoscopic 3D for a 2D sidescroller?

The fuse system, the stage design, the art – it’s all terrific. But regardless of how outstanding everything else in Dark Incursion is, there’s one flaw that simply can’t be overlooked – the controls are a busted mess.

Maybe “busted mess” sounds a little harsh, but at times that’s exactly what it feels like. Anya doesn’t always attack when you tell her to, she rarely ducks in time to avoid a bullet, and her jumps have a hard time performing the way you’d expect. Half the time it seemed like she was bumping her head on an invisible ceiling. For a game that’s so predominantly about platforming, this simply won’t do.

After about half an hour, it became easier than expected to look past the poor controls and appreciate the game underneath – but that’s not a sacrifice that any gamer should be expected to make. 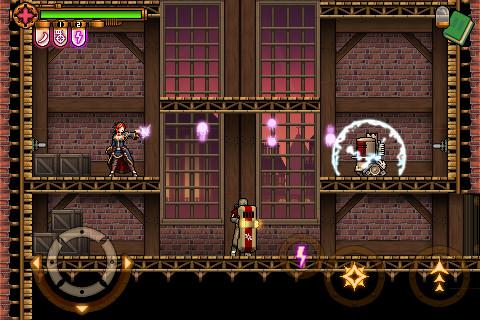 When the game was announced earlier this year, there were plans in the work to bring it to PC and Mac as well. It would seem as though these frustrations would no doubt disappear when played on a keyboard, so you may want to hold out for that. That being said, the official Dark Incursion iTunes page is promising that an “update with the control fix is on the way.”

As a fan of Metroidvania style gaming, it was hard not to get excited at the thought of what Dark Incursion could potentially offer. And with so much of the package being exactly what it needed to be, the poor controls only sting that much more. Dark Incursion is a great, great game – but it’s one with a serious flaw that ultimately hampers the experience too much. Be sure to keep an eye out for this one, but only after its version number moves past 1.0.