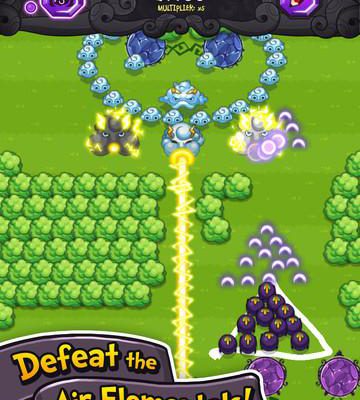 Dark Dot doesn’t last long, but it’s a blast while it does

Evil-doers these days just don’t know how to be proper villains. Their schemes are all about revenge, or greed, or they’re simply bad guys because life forced some sort of tragedy on them. Nobody is evil for evil’s sake anymore. Nobody goes out and tries to just take over the world. That’s a shame: conquering the world is becoming a lost art. That’s why it’s so refreshing to play Dark Dot, a game that not only has you taking over the world, but doing so in style.

In Dark Dot, you take on the role of the Darkest of Terrors (“Dot” for short). The Cyclone King, who rules over the Air Elementals, has insulted Dot; as a result, our little terror has decided that he needs to conquer the world, starting with the Cyclone King and his forces.

The game is a top-down shooter, but instead of controlling your forces with a virtual thumbstick or D-pad, you draw a shape on the screen to handle formations and drag them around the screen. The drawing mechanic is what makes things really interesting. You select the pencil tool, draw a rough shape, and the dots will arrange themselves into a corresponding formation. You can then shrink, expand, and rotate the shape, adjusting your force’s positioning as they continue to journey through the levels. 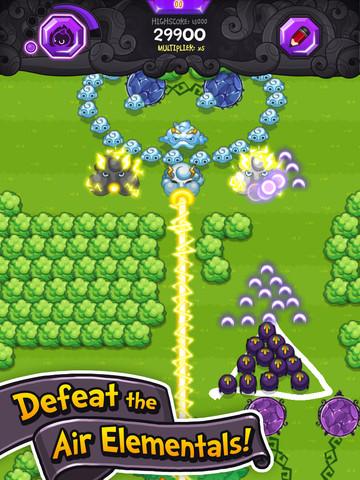 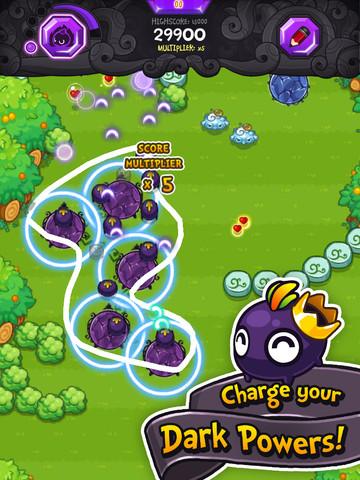 Most of the time, drawing a rectangle or an oval and then changing the size throughout the level is all you need to do. That said, the game forces you to switch things up by presenting you with pads called “Aether Chargers” in various arrangements. By getting your little darklings to sit on these pads, you accumulate Darkness Breaks. These Darkness Breaks are incredibly useful, since they grant a score multiplier, a massive burst of shots, and temporary invulnerability. So while you don’t have to change your formation, it’s really in your best interest to do so.

For a free game with no ads or hidden costs, this has some pretty stellar production values. The graphics are absolutely adorable, with wonderful cartoon-like characters and ridiculously fun cutscenes that further the story along. The music and sound effects, too, are a riot.

However the one big problem with Dark Dot is that it’s surprisingly low on actual content. There are only a few levels, and it doesn’t take too long to play through all four (one of which is the tutorial).

Dark Dot is a nearly perfect game. Not only is it fun and creative and lovely to look at, but it’s got some stunningly original gameplay mechanics. Unfortunately the game is way shorter than it should be, which is a shame, because this is such a great app. You should definitely pick this up, but don’t expect it to provide you with more than a half hour of gameplay or so.