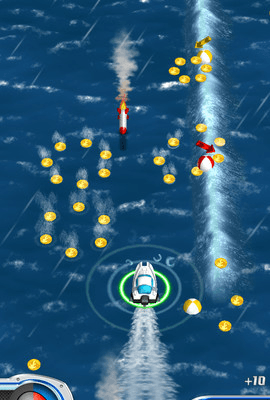 Danger Boat is much more safe than dangerous.

Danger Boat sounds exactly like the kind of rip-roaring good time you’d expect to have with a B-movie featuring scantily-clad women, rugged adventurers, and a shark. Or something like that. Or a bizarre James Bond-like vehicle that suggests you’re about to be in for a bad time. Instead, it’s a very pedestrian endless runner set amongst the bluest waters of the ocean. Your job is to bob and weave through rocks, sets of incoming missiles, and other obstacles that serve as swift ends to your journey. In short, it’s a pretty tame romp whose name doesn’t feel very appropriate — you’re hardly experiencing any “danger” here.

The follow-up to Pixelocity’s much more exciting Disc Drivin’ places you in control of the titular “danger boat” as it careens down the ocean. Perhaps “careens” isn’t the word — this is much more of a leisurely stroll down a river as if you were in an inner tube. Missiles hurtle toward you and mines tossed in from enemy submarines create some absentminded obstacles to swerve away from, but you never feel as though there’s any immediacy to the run.

Unlike genre greats like Jetpack Joyride or Temple Run, there’s no driving force to keep you trying again and again once you do end up succumbing to one of the many jagged rocks or crashing waves. It’s all very contrived, and even paced rather slowly — for a motorboat, it’s a pretty low-intensity ride.

An in-game store full of upgrades and aesthetic options to change your boat with as well as in-game missions for you to complete in order to progress round out this very humdrum package, almost as if it graduated from Endless Runner 101, with a palette of similarities that, like the gameplay, can be seen in virtually any game on the App Store. At the very least, it’s entertaining to actually swerve between the rocks and bric-a-brac strewn throughout the play lanes. Instead of swapping out from left to right, the boat moves in quite the realistic manner, turning and banking rather than going “poof” from here to there. It’s one shining example of the ambitious Disc Drivin’ that can be seen in this follow-up, but that is, unfortunately, the extent of what can be siphoned from that doubly entertaining game. 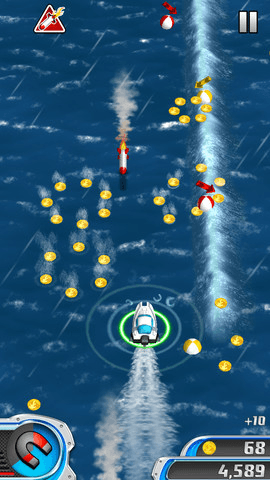 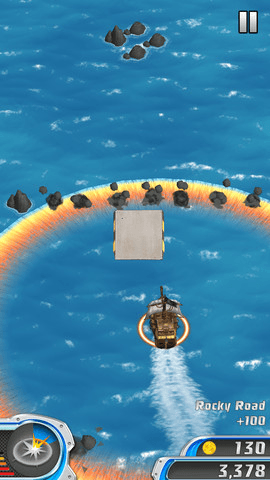 There are a bevy of better, well-crafted options you could choose from if you’re looking for a high-octane race through the water, and that’s starting with a host of free apps. Danger Boat isn’t particularly horrible per se, as it’s quite playable and safe. Funnily enough, that’s what makes it so frustrating — how safe it is. You’ve seen this game hundreds of times over and over. You could fork over the money to pay for some interesting new rides, but in the end paying a ridiculous amount of real-life cash for something so trivial as a pirate ship would feel a lot less thrifty than enjoying the very agreeable perks set forth in a game like, say, Vector. Steer clear of Danger Boat and find yourself something much more satisfying.