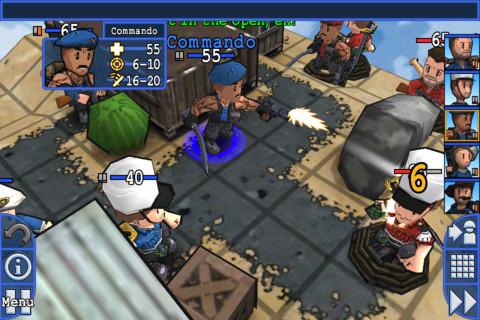 Back in the summer of 2010, turn-based war gamers with a love for all things portable were wowed by the announcement of a then upcoming game called Lost Company. The visuals looked stunning, the gameplay look deep – all in all, it had the potential to be the perfect pocket strategy game. Now, more than a year later, Lost Company has hit the App Store under the new moniker Danger Alliance: Battles – but was it everything we’d hoped for?

Danger Alliance: Battles puts players in charge of a squad of military personnel, each with their own strengths and weaknesses. You’ll get to pick from the flamethrower-wielding Incinerator, the close-combat Commando, the long-range Sniper, and a variety of other similarly unique specialists. No two troop types play alike, and you can mix and match them any which way you want.

Once assembled, you’ll take your squad of trained killers into battle, where they’ll look to wipe a similar group of characters right off the map. Each round of play is turned based, with one side choosing movements and attacks for each of their characters before the opposition has a turn to do the same. You’ll need to make some smart decisions about who will do what in which order. For example, I may want to have my Incinerator breath fire at a line of enemies before I move my Commando in, because if I moved my Commando first, he’d get hurt too.

Likewise, once a player is knocked out of commission, you’ll have three turns to revive him with a medical pack before they die for good. This then becomes a game of tough choices – do I have my Grenadier deal damage to the trio of baddies in range? Or do I spend his action to revive my now out of commission Sniper? And since the medical packs are limited, too, you’ll want to be strategic in deciding who might be worth saving.

As a strategy title, Danger Alliance: Battles is great. It really gets what it’s supposed to be, and the gameplay ends up delivering on exactly what you’d hope for. But once you start looking outside the core gameplay, everything starts to crumble.

The visuals, while cartoony and charming, lack a certain polish. Rather than coming off as quirky, they end up feeling like a tech demo – as if this is what the developer would have presented to show off the gameplay before a proper artist jumped on board with the team. Sometimes the graphics are inexplicably sluggish, too – a strange thing considering how little you’d expect them to tax the system. 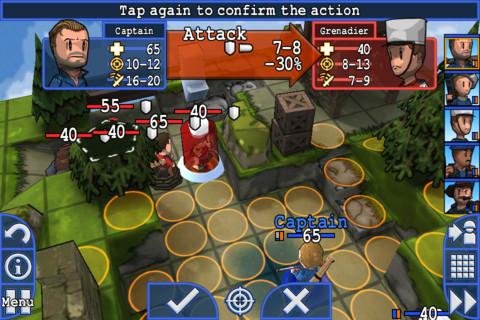 Danger Alliance isn’t a very meaty offering, either. There are only six maps and two modes to choose from, and all but one map and one mode are locked away at the beginning of the game. It’s a nice way to force people to experience everything Danger Alliance has to offer, but considering it offers so little, you can’t help but feel like this was a cheap ploy to get players to stick around.

Considering the lack of a proper single player campaign, you might expect that multiplayer would be the showcase here. Instead, the only multiplayer on offer comes in the form of single device hotseat play – a far cry from the online experience Danger Alliance is so clearly suited for. What’s more, it would be a perfect game to utilize asynchronous play – one of the biggest new features added to Game Center as of iOS 5. But instead, Danger Alliance seems to shirk Game Center (and OpenFeint for that matter) completely, integrating neither online multiplayer, nor achievements into its gameplay.

What’s presented here is a great start, but ultimately, Danger Alliance: Battles ends up feeling like a woefully incomplete package. A lack of online multiplayer, no real campaign to speak of, and visuals that are rough around the edges deflate an otherwise enjoyable strategy offering. There’s a really fun game at its core, but unless Tome Studios decides to flesh things out, Danger Alliance: Battles will remain defined by its missed opportunities.