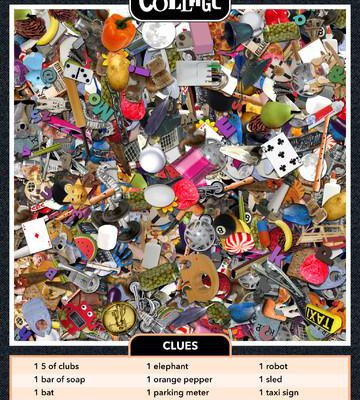 The hidden object genre has started to pick up steam on iOS, as developers are translating the free-to-play Facebook formula of games like Hidden Chronicles or Criminal Case into mobile experiences. These simpler, typically easier games tend to provide a great hit of hidden object gameplay while on the go, but unfortunately, the platform’s newest offering, Daily Collage, misses the mark every step of the way.

Daily Collage is a free download on iPhone and iPad, but that free price is nothing but a tease. For that download, players are given one hidden object scene to complete per day, consisting of a massive, eye-straining junk pile of high definition objects that have simply been thrown onto the screen. 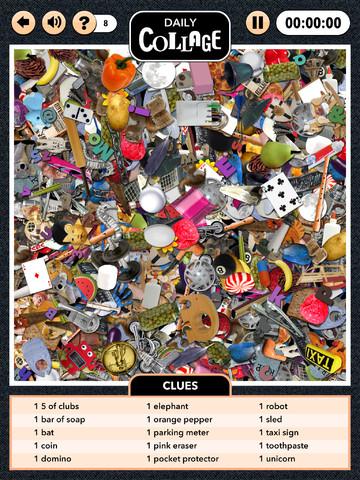 Once the 12 or so items are found in that day’s puzzle (a process that takes no more than two or three minutes), this “free” game becomes unusable until the next day. Sure, you can replay the same scene over and over again, but the hidden items and their locations never change, so there’s absolutely no point in doing so.

Each day is the same as the last, with slight variations in the items that have been chucked onto the screen, relative to the items that need to be found on the list. If you want a different experience, you’re required to spend real money to unlock easier or more difficult gameplay options (which may change the number of items you’re required to find in a scene, but don’t actually change the scenes themselves), or the unlimited mode that gives you a random scene to complete each time you play. 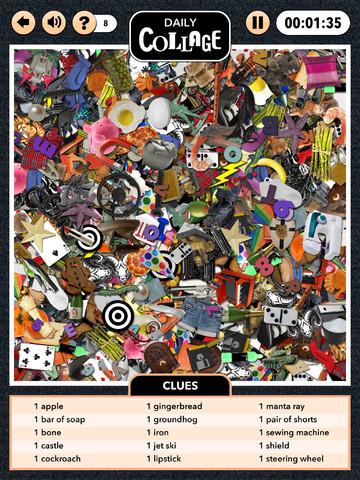 Each one of these options comes with its own purchase price. The two difficulty settings are $1.99 each, while the unlimited puzzle mode is $4.99. If you’re keeping track, that’s a total of $9 in additional purchases, not to mention the hints that can be purchased for $0.99 and up, depending on how many you’d like to add to your account.

Again, the game’s unlimited puzzles are only slight variations on the same scenes you’ll receive for free every day, and there’s very little fun that can be had by straining your eyes to pick out a light bulb in a pile of toys, tools, cars, plants, and animals (as well as many other categories of random objects), as examples.

Furthermore, while available as a native iPhone app, the game is virtually unplayable on that small of a screen. The scenes are so cluttered, so bright, and so overly textured that it’s impossible to tell one item from another. This issue is compounded by the fact that the item list takes up a huge portion of the screen, making the actual hidden object scene even smaller still. 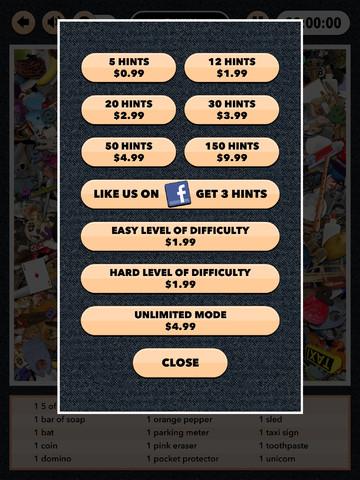 Daily Collage is touted as the “world’s best and only daily hidden object game for iOS,” but apparently, the game’s developer is a bit confused as to the definition of the word “best.” Daily Collage offers no more than a few minutes of play time for free each day, and then expects players to shell out real money to unlock the rest. There are far more (and far better) free hidden object games on iOS than just this, so there’s no reason whatsoever to give Daily Collage the time of day.