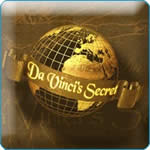 It seems Leonardo Da Vinci just can’t keep a secret these days, as books, movies and television shows keep popping up with new insights gleaned from the smallest details of his celebrated works. Now, video game designers are taking their own look and have found an intriguing puzzle challenge that’s perfect for those who enjoy methodical, strategic problem solving.

In this version of the story, a woman has discovered an ancient manuscript in the belongings of her late uncle. Enlisting the help of a bespectacled professor, Helen sets off on a trek across Europe, discovering secret clues hidden in the notes, journals and paintings of Leonardo Da Vinci; clues that point to a now rather well-known secret. But, in order to reveal the clues and crack the mystery, Helen must solve a series of brain-bending puzzles.

The objective of Da Vinci’s Secret is to move colored balls around the playing field into groups of three or more. A matching group is removed from the screen, freeing up space to eventually create a clear path for special objects to be moved from one point to another. In some levels, the goal is to create a path for a key to travel to a lock, while in others three or more puzzle pieces must be assembled in a clear space on the board. Power-ups are both randomly dropped into the action but they are also given as a reward for good play. Creating a number of matching groups in a row adds a fireball to a “mysterious” Da Vinci device that, when opened, allows the player to increase the frequency of the appearance of the power-up of their choice. An automatic hint system is never hesitant to suggest a move, although experienced players may find that the game’s advice is not always best to follow.

The puzzles in Da Vinci’s Secret are slow and strategic. The balls are not marching towards a bottomless pit, nor is a timer ticking its way down to a nerve-shattering alarm. Rather, the player must use logic and careful planning to arrange the balls successfully. New balls are dropped in only if the player is unable to create a group of three matching balls, thereby rewarding the player for playing the game and only creating a new challenge when the player is otherwise helpless. Fans of rapid clicking and flashing lights will want to look elsewhere, but puzzlers who prefer precise problem solving will appreciate the games intricate challenges.

Da Vinci’s Secret is jammed packed with levels — 150 of them — but they don’t really change that much as the player progresses throughout the game. Although the level objective may change, the later levels are not really that much more difficult than the earlier ones. Since the game does contain an element of chance, and new elements are added to the challenge often, play does remain fresh from level to level – but the storyline does little to persuade the player to advance. At this point, just about everyone has heard Da Vinci’s secrets, so the story doesn’t really reveal anything new (we won’t spoil it if you haven’t read or seen the Da Vinci Code).

The characters are original and the clues are inventive, but the basic framework should be familiar to just about anyone. Eventually, the adventures of Helen and Professor Gallagher become nothing more than a rather minor distraction on the way to the next puzzle.

But, what it lacks in originality, Da Vinci’s Secret makes up by being a fine example of an intriguing style of game-play. The freshness of the challenge is compelling enough to cause the player to skip past the lengthy dialogue and glowing reveals in Da Vinci’s art. The graphics create the feeling of a brainy vacation through the stone alleyways of Europe, through dark corners full of ancient riddles and ghosts playing chess — a fitting setting for the strategic challenges that each level presents.

Intriguing, compelling, and a wonderful change from the typical puzzle, Da Vinci’s Secret is an excellent, if not imaginative, discovery for the player who prefers to be rewarded for smart play rather than fast clicking.