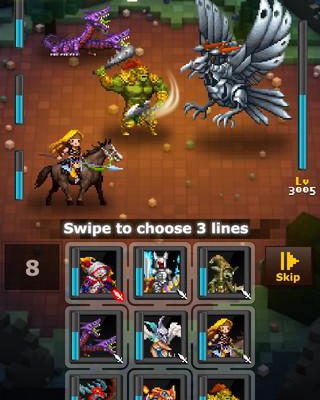 It’s like a modern Captain N: The Game Master.

D.O.T. Defender of Texel is a freemium mobile game produced by Mobage, and as such it adheres to many of the publisher’s typical mechanics. Questing, boss fights, PvP, elite team building, fusion and evolution, and so on all play a major role. But as similar as it may be in spirit to its brethren, the presentation – the gorgeous, fantastic, tongue-in-cheek presentation – makes it feel like something entirely unique and special.

Much like Kevin Keene, the awkward teenage hero of NBC’s equally awkward (yet much loved) cartoon, D.O.T. players have been sucked into a video game. Only in this case it’s a single mobile game and not a collection of titles that span a particular console. And there’s no horrifically obnoxious Pit, either. After an admittedly kickass intro players are dumped straight into the game with a short tutorial bringing them up to speed on the basics. Combat utilizes a team of 9 heroes that players must select in groups of three by swiping along a 3X3 grid. After three groups of three are selected (no repeats allowed) the “goodguys” and “badguys” trade blows until one group is toast. Questing is a simple matter of tapping “Go” and watching the designated leader walk down a linear path while occasionally coming across treasures, enemies, or other defenders to duel.

In-between all the questing and combat are the more mundane (but still essential) tasks, such as hero management and creation. Various items can be earned through quests and fighting that can in turn be exchanged for more heroes. Heroes can then be shuffled into the main group, sacrificed in order to enhance more powerful units, or fused with others of the same type in order to evolve into more powerful forms. As I’ve said; it’s all very Mobage.

I’m well aware of the fact that not everyone starts to salivate at the sight of pixelated visuals, but anyone who does appreciate pixel art and retro graphics will no doubt need a napkin once they start playing D.O.T. These sprites walk the fine line between simple and detailed with ease. My particular favorite and current heavy-hitter, a rare named Aranthur, both looks awesome and can tear through a group of enemies single-handedly thanks to his special skill.

The combat is also a nice change of pace from the stagnant offerings in most other Mobage titles. Granted it’s just swiping across a grid a few times but it’s still more involved than many of its peers. And watching a powerful trio of heroes rip through their opposition – pixels exploding all over the place, treasure chests dropping left and right – feels great. 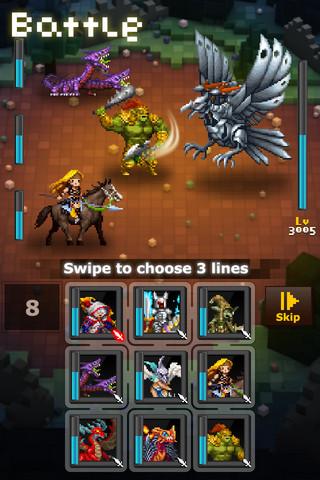 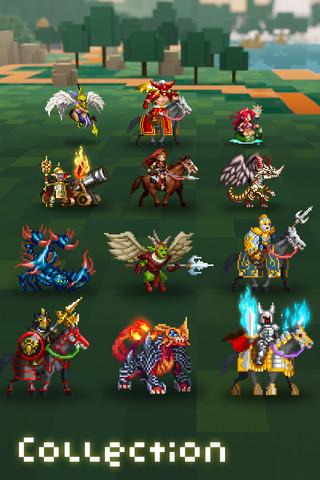 Despite incorporating many of the elements most Mobage players are familiar with, D.O.T. does seem to be missing a fairly significant one. With all the characters and various rarities, where’s the option to trade with other players? I understand that creating a player-driven economy has a tendency to create problems with duplication, theft, and general dishonesty, but what good is amassing a league of powerful warriors if I can’t exchange a few of them for something even greater?

I also think it’s a shame that player stats such as the energy needed to go on quests can’t be improved. On the one hand it makes things more “fair” when every single player has the same restrictions, but on the other hand having to wait up to five hours for my energy to refill kind of kills my joy. The game also chugs quite a bit on my 3GS, but it does so in the segments between all the action, so I think it’s more of a latency/server issue rather than hardware. It’s not significant enough to ruin the fun, but it’s really noticeable and can be irritating at times. 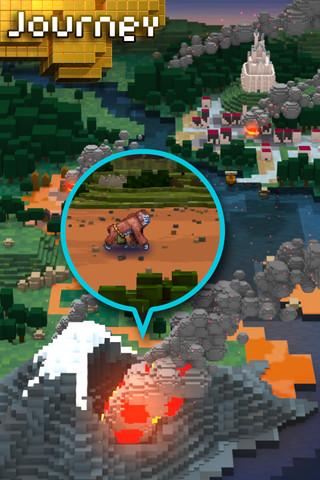 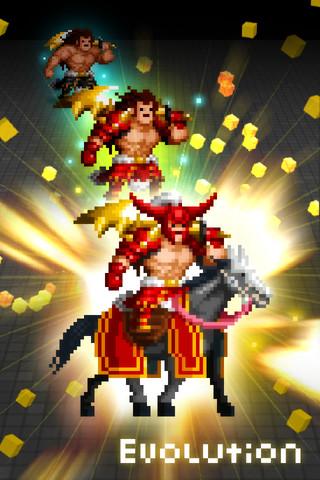 I will freely admit that my view is being distorted by the rose-tinted glorious homage to retro that is Defender of Texel‘s presentation, and I’m okay with that. Sometimes a little extra polish with the visuals and sound can make a big difference, as they do here. I still think it’s borderline criminal to create a game featuring rarity classifications and not include a trading feature, but hopefully that shows up down the line. If not, it’s still a fun distraction.