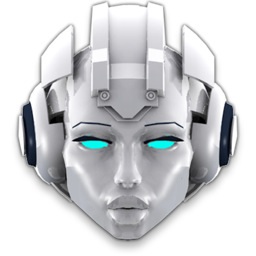 Tilt the screen to roll a severed robot head past obstacles and back to her body.

Everyone has their turn-ons: Foreign accents, intelligence, a Swiss bank account. Or, of course, decapitated cyborgs. In d-capitatrix, a bevy of curvy robot vixens seductively ask for your help recovering their missing noggins. Hips will swing and heads will, literally, roll.

The object of each level is to guide a severed robot head back to its body. Do this by sending the head through two different portals to collect three battery packs before rejoining the robot’s physique. You’ll tilt the screen left and right to move the head, along with other objects on the screen, like balls or bombs. You’ll also need to click and drag the two portals around the stage in order for the head to reach different areas.

As you progress through the levels, extra challenges and obstacles will appear, and you’ll need to use your puzzle-solving skills, as well as the power of momentum, to succeed in d-capitatrix. (The head can really be sent flying at high speeds, causing it to groan in pain with every breakneck collision.) For example, you might have to use the portals to round up a collection of weighted balls, and then move them to a platform. They lower the platform, which raises a partition that blocks your way. You might also have to lure some bombs down the portals and use the game’s physics to bounce them into a brittle wall.

Like the greatest casual games, d-capitatrix centers on a simple, easy-to-learn concept. I’m also a big fan of keeping instructions and in-game dialogue to a minimum, which is another welcome feature of this game. Additionally, this title is exceptionally polished, with sleek, simple graphics, appropriately ambient background music and creative presentation.

Unfortunately, while the total package is fantastic, some players may feel the offering of 30 levels is somewhat paltry. Indeed, more levels, or gamesmold adding more down the road, would have made this game a flawless one. There’s also no social or online component, but as usual, this is only a con depending on the player; it’s unlikely an online element would have added any real value anyway. A time limit would have added some exciting pressure, however.

Even if voluptuous-but-mutilated robotettes aren’t your bag, d-capitatrix is a quirky puzzle game that promises sexy fun for all gamers.