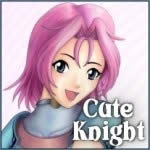 With intricate subplots, playtimes of 30 hours or more, complex menu-driven interfaces and hundreds of different items and character stats to juggle, the role-playing game (RPG) is not a genre typically associated with casual gaming.

Cute Knight, however, strips away a lot of that weightiness while remaining true to its RPG roots. The result is a light adventure that’s easy to get into and can be played in short spurts – in other words, it’s perfect for the casual gamer.

The game picks up the story of a young orphaned girl on the day she turns 18 and gets kicked out of the orphanage to make her own way in the world. She is visited by a fairy godmother-like creature, who tells her that she has until she turns 21 (three years) to decide what path her life is going to take.

She makes her way to the nearest town, and during the three years she spends there she can, through a menu-driven interface, choose to develop certain skills, work certain jobs, and make certain moral choices that will ultimately shape her personality and dictate what kind of adult she evolves into. By the time she hits 21, her life path (including personality, career and even love life) have been set in stone.

In most of the traditional console RPGs like Dragon Quest or Final Fantasy, this would be the signal for the prologue or introductory tutorial level to end and the "real" meaty quest to begin. However, in Cute Knight, that’s all there is. The game truly does only concern itself with the three formative years of the girl’s life, ending on the day she turns 21. If Final Fantasy is an epic novel, think of Cute Knight as a short story.

One of the most refreshing things about Cute Knight is that players can actually role-play and have the freedom to remain true to the role they’ve chosen. If the girl wants to be a cook, for example, she really can do nothing but take cooking classes and work in the hotel kitchen for three years. Or, if her goal is to become a popular (yet ditzy) socialite, she can spend all her time socializing in the town square, taking dancing lessons at college, and trying to bag a good husband, without being forced to fight endless waves of monsters to gain experience points. In fact, it’s possible to play through Cute Knight without ever taking up a sword.

Adventurers aren’t left completely in the dust, however. Those looking for a more traditional dungeon crawl experience can strap on some armor, become adept at weapons and magic, and go explore the ominous sinkhole at the edge of town that’s crawling with monsters.

Every action you perform will affect the girl’s various skills and stats, either raising them or lowering them depending on the situation. On her twenty-first birthday – the day of reckoning – those stats will dictate what kind of adult she becomes, and you’ll be treated to a little vignette of what the rest of her life is like based on how she chose to develop herself. Will she be a dumpy assistant cook who spends the rest of her days being bossed around, or a heroic fighter solving quests, marrying a prince and living happily ever after?

The only real beef with the game is that the tasks can get repetitive. Tasks are entirely menu-driven, so once you’ve selected something for the girl to do that week, you simply sit back and watch her do it as the days tick by. How cool would it have been to have interactive mini-games representing each task? (Perhaps a Tapper-style mini-game to go along with the bartending job, for example – or a Diner Dash-inspired waitressing game…)

Quibbles aside, Cute Knight is a well-crafted RPG that should be commended for focusing on life instead of just combat, and for refusing to fall back on the RPG stereotype of having to fight everything in sight (why can’t we all just get along?). Although a relatively short adventure, Cute Knight boasts more than 50 different endings so it’s definitely worth playing over and over again. How often can you say that about an RPG?