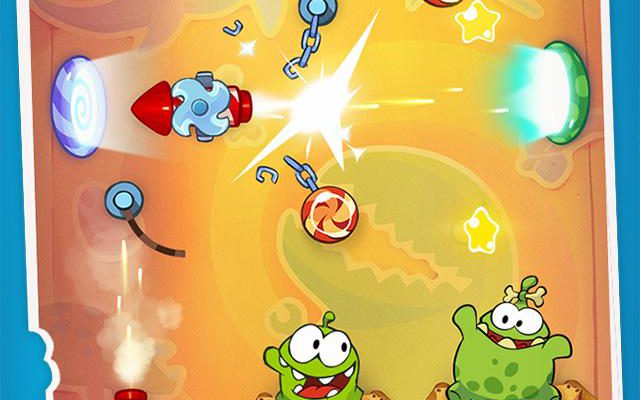 Did you know they had candy even in the Stone Age?

I’m not sure if it’s because of the pitch-perfect gameplay, or the fact that I have an undeniable sweet tooth, but Cut the Rope by ZeptoLab has always been one of my favorite casual games ever since my very first smartphone. Cut the Rope: Time Travel marks a return of the addictive physics-based puzzler, and has our little alien pal Om Nom tumbling through all sorts of time periods like The Middle Ages and The Renaissance, and meeting up with his ancient ancestors to share a piece of candy or two.

The first thing you’ll notice when playing Cut the Rope: Time Travel is the addition of a second Om Nom ancestor in every level, and two pieces of candy to feed to the both of them, respectively. It might seem like a cheap ploy at first, but after a few levels of getting used to the new dynamic, the double Om Noms work so well in this context that you might even forget they haven’t always been there from the start. The inclusion of two pieces of candy opens the door to a whole era of new ways to play, such as bouncing the candies off one another, or swinging them into each other to build up momentum. The visuals in Time Travel are as shiny and mouthwatering as ever, and while they don’t do anything drastically different from previous Cut the Rope games, they really don’t need to, and manage to expand on the proven formula in all the right ways. The character designs of Om Nom’s ancestors are just as sugary sweet as the candy in the game itself, and the opening cinematic uses an interesting blend of cartoony animations over a real-live background.

I am always amazed at how ZeptoLab still manages to add completely new elements to Cut the Rope’s core gameplay even after all these years, and their latest effort is no different in this regard. Time Travel incorporates so many unique and different ways for you to cut those ropes and get Om Nom his candy, but it always inherently remains a Cut the Rope game, which should be a lesson to all game developers out there who are working on a sequel: this is how you make one. To name just a few of the new inclusions here in Time Travel, the game will have you manipulating whirling saw blades to free your candy from heavy tethered chains; freezing time to stop the momentum of swinging candies with the tap of a button; and timing the detonation of bombs to orchestrate an explosive boost for each piece of candy. Every new gameplay mechanic is wonderfully envisioned and thought out to make sense in each of the different historical settings, and every one of them is an absolute blast to learn and apply in the game.

The only real drawback to Om Nom’s third outing is that Time Travel is a much easier game than other installments in the Cut the Rope series, which makes those initial 75 levels simply fly by before you even know it. Most gameplay elements are introduced through a series of self-guided tutorial levels, and then nearly abandoned for long stretches of time when the next element comes along. It is only until the final level pack, The Stone Age, where ZeptoLab begins to mix and match things up like we all knew they would, and throw saw blades, rockets, bombs, and time manipulation at you all at once in the very same level. Sadly, just as the real challenge starts to pick up, the game is over too soon. 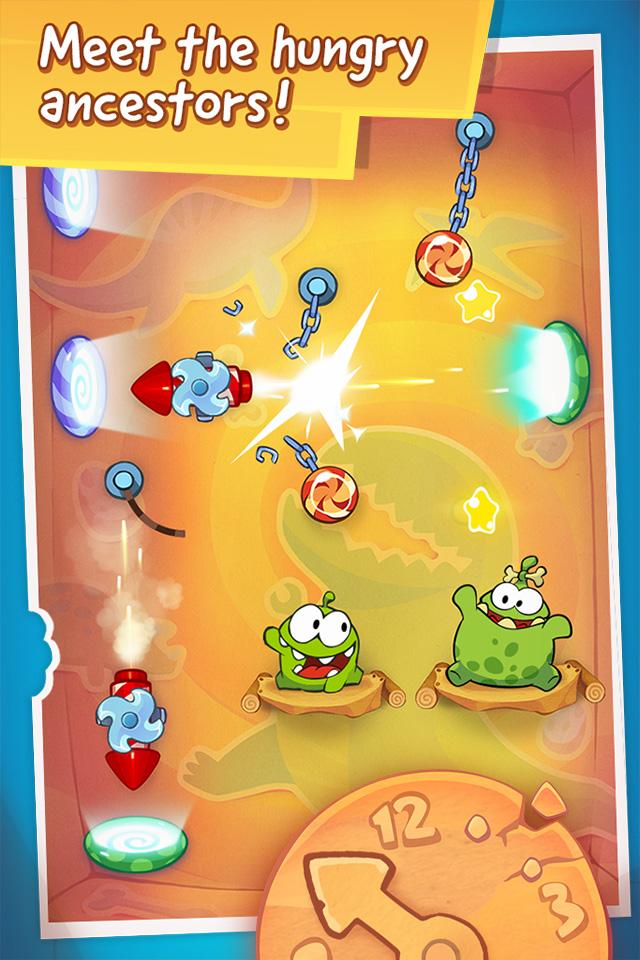 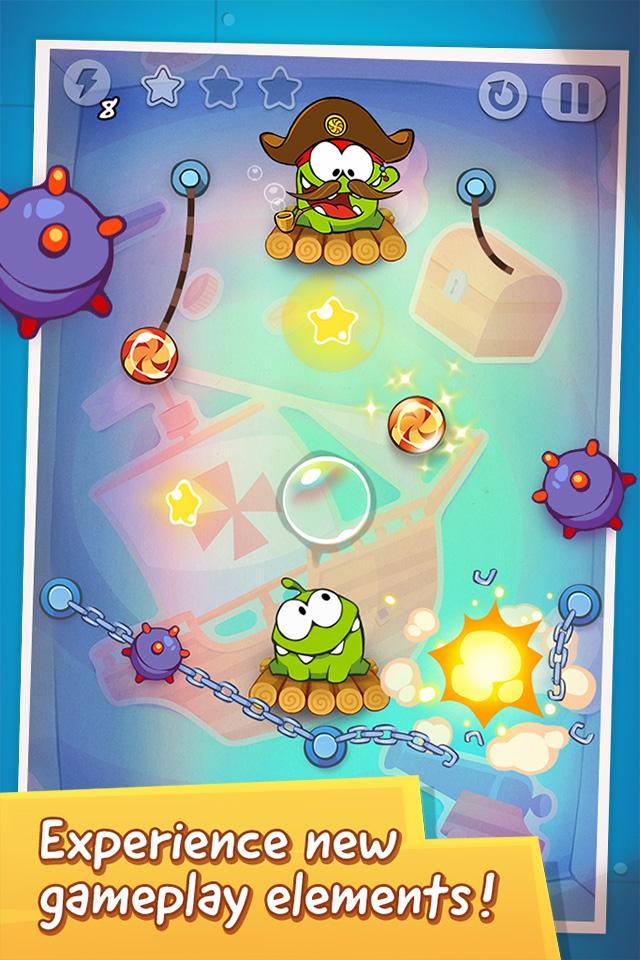 To make the game even easier, Time Travel lets players buy superpowers through special in-app purchases, which enables On Nom to use telekinesis to move the candy pieces at free will, and bypass all obstacles like tethered chains or spikes that would normally leave your candies shattered to bits. The game still encourages you to replay every level using these superpowers even if you don’t need them, however, in order to collect a hidden blue star that is revealed after spending your superpower point. It comes across as a shoddy method for boosting the replay value of the game, similar to the Mighty Eagle’s function in Angry Birds, only decidedly less fun, and it quickly spoils your sense of 100% completion for perfectionists like me. There is never any skill or effort required in completing a level with telekinesis, and the “hidden” blue stars are always right in plain sight, and it’s almost impossible to miss some of them.

Even though the game is a little bit too easy for my taste, Cut the Rope: Time Travel is still the perfect follow-up to Cut the Rope and Cut the Rope: Experiments, and a real lesson in how to make a sequel and how to make it right. With the introduction of new core mechanics like two Om Noms in every level, and tons of new gameplay elements at every turn, this is ZeptoLab and Cut the Rope at their finest. I’m looking forward to seeing what kinds of exciting new eras the game’s future level updates will take us to next: which not only confirms that aliens have been around for quite some time, but that candy has also been there right along with them!