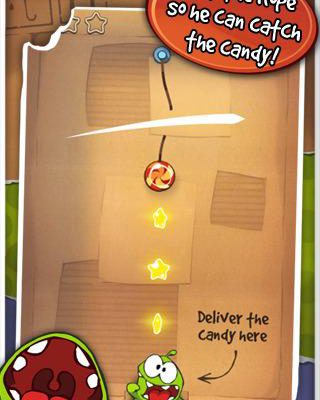 Hangin’ by a thread.

Who knew flinging birds at a pack of pigs would be so much fun? Or that jumping up a series of never-ending platforms with no real rhyme or reason would keep you entertained for hours? In its short life, iPhone has been home to scores of such titles, simple actions transformed into so called killer-apps with notable frequency. Five minutes into Cut the Rope, and it’s clear the format has another such hit on its hands.

Once more, the concept behind Chillingo’s latest is an especially simple one, with play revolving around simple physics.

Your ultimate task being to feed a cute and cuddly monster – named, in rather savvy fashion, the Om Nom – with a series of pieces of candy. Doing so, as the name suggests, is a case of cutting various bits of rope that the candy gets attached to, each slice requiring nothing more than a quick swipe of your finger across the screen. 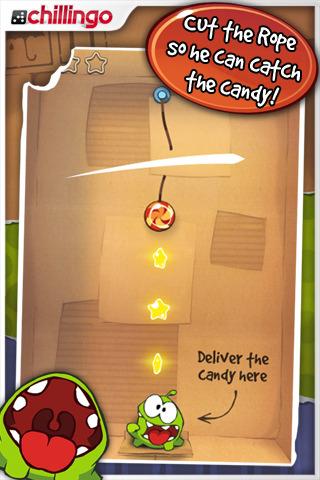 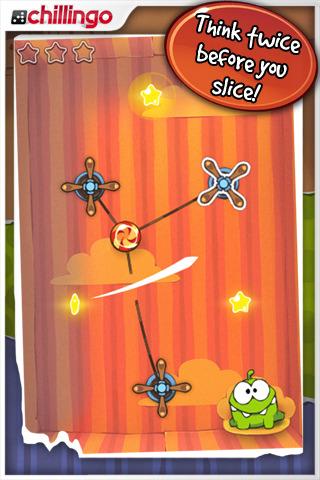 It’s the kind of action that takes seconds to learn, but as you might expect, quickly becomes just one part of a much more complicated process.

Along your way to dropping the candy piece into Om Nom’s mouth, you’re also challenged with picking up as many of the three stars dotted around each level as you can, chopping and swinging the candy along what is essentially a set path in order to come away with top marks. There are two ways to accomplish this; try-it-and-see style experimentation, a la Angry Birds, or for the more gifted amongst its audience, a bit of thinking time, with second guessing how the candy will react to each cut before you make it resulting in far fewer attempts.

It’s like learning a new language. Once the first batch of levels is completed (levels contained within the boxes On Nom makes his home – from cardboard, to foil, to fabric and, finally, a gift box), you quickly find yourself getting to grips with just what ropes you need to cut and in what order. Of course, this coincides with Cut the Rope starts upping the ante.

Soon there are bubbles to contend with, which – when in contact with the candy – drag it upwards in a straight line. You can pop these bubbles with a simple tap, sending the candy dropping back to earth, but knowing just when to do so is not so easy. 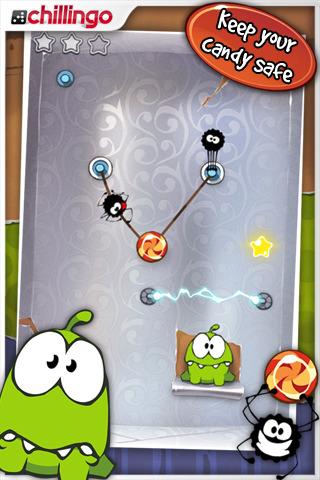 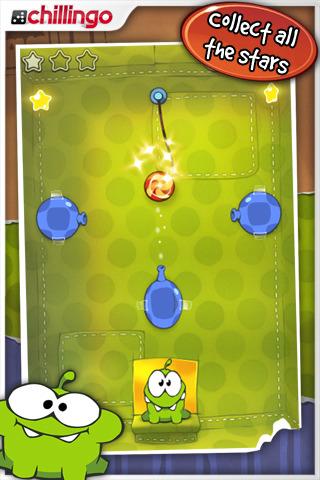 Likewise, whoopee cushions can be squashed to force out air and, in turn, push the candy one direction or another. Making sure you don’t force it straight into the spikes that begin to adorn the stages early on is a major proviso for those who threaten to get carried away, however.

Like all such puzzlers, Cut the Rope has a brilliant way of keeping you on your toes throughout – once one challenge is mastered, so a new one is introduced that gives play an entirely new edge. You’re never comfortable, nor should you be, lest Cut the Rope suddenly becomes a plain Jane.

Nonetheless, there is a question of just whether it tries to do too much at times. Some levels are so convoluted that even those with physics on the brain will struggle to comprehend and therefore manipulate them effectively on the first go, making trial and error the only route forward for all. That’s fine, once or twice, but when the pressure starts mounting and levels take a dozen or so attempts to master, it’s questionable whether Cut the Rope saps a little bit of the fun in the process.

Regardless, on the whole Cut the Rope is a solid idea, delivered in a typically accomplished fashion. With the kind of looks other puzzlers would do well to mimic and a set up that encourages you to retry stage after stage in order for perfection, it’s hard to imagine Cut the Rope being anything other but yet another iPhone puzzler everyone is talking about in quick time.