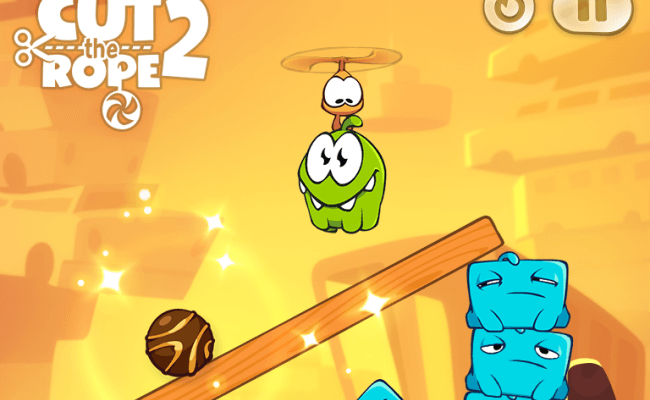 Monsters are infamous for having voracious appetites that cannot be sated, hence why they prowl the countryside and gobble up reams of sheep. Not little Om Nom, though. The star of the hugely popular Cut the Rope physics puzzler is content to nap in his box, surrounded by his stash of beloved hard candy.

Sadly, when said stash gets stolen by spiders Om Nom’s stubby little hand is forced, and he goes out into the wide world to take back what’s rightfully his. Oh, Om Nom. Are we born monsters, or do we become monsters in order to survive life’s cruelties?

Cut the Rope 2 doesn’t waste time with weighty philosophical questions. It simply wants to give you more good times with bits of candy swinging from the end of a rope. Thus, the premise for Cut the Rope 2 is identical to its predecessor: You “cut” ropes holding up candy in hopes that the tasty morsel will fall into Om Nom’s waiting maw.

If you’re up for the challenge, you can also play with physics in hopes that the falling candy will collect up to three stars on its way to Om Nom’s belly. Getting three stars on a stage requires forethought and true knowledge of each level’s layout.

Cut the Rope 2 makes it trickier than ever to three-star a level, because Om Nom’s second quest for sweets doesn’t confine him to a box. Instead, he roams the wide world, including city culverts, forests, deserts, and even a junkyard.

The change of location brings with it one of Cut the Rope 2‘s most compelling new additions: The Nommies. These little beasties are on-hand to help Om Nom grab his candy and stars. Roto is a dragonfly that carries objects (and even Om Nom himself) across gaps. Toss can throw objects, including candy. Boo can startle Om Nom into leaping upwards. And the very best of them all, Blue, multiplies when you tap him. You’re supposed to use Blue’s cloning ability to lift up planks, items, and other objects, but to be honest, you’re probably just going to waste time tapping him over and over until you have half a dozen sad-eyed gremlins spilling all over the stage. 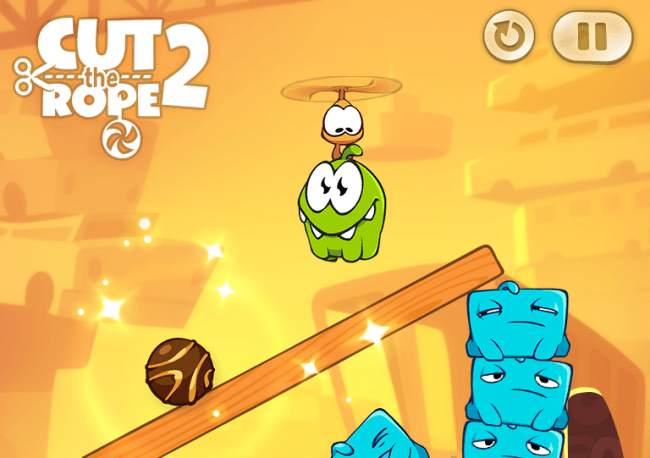 Cut the Rope 2‘s charming character designs mean Om Nom is in good company, but more important, the Nommies add depth to the gameplay. Their inclusion means you need to work a little harder and figure out how their talents, combined with the first game’s traditional rope physics, can help you nab three stars. What’s more, you also need to play around with balloons, bellows, logs, and other objects that herd hard-to-reach candy closer to Om Nom’s grasp.

You’re not required to gather stars in order to pass a level, however, so if you find yourself getting frustrated, it’s usually easy enough to feed Om Nom, move on, and return later with a fresh set of eyes.

Many rope-based physics puzzlers have hit the App Store since the introduction of the original Cut the Rope, but Cut the Rope 2 demonstrates Om Nom is still the top monster. He should prove to be good company if you don’t want to make extended eye contact with your relatives this holiday season.