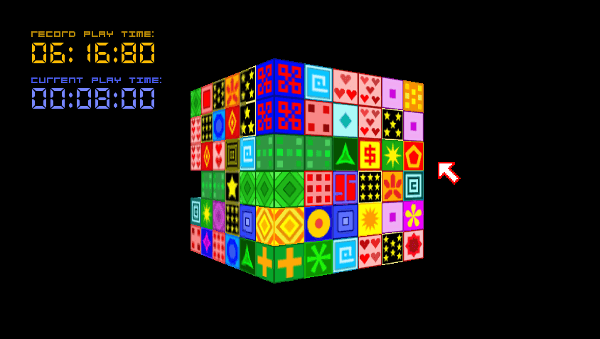 The crazy uncle of Mahjong solitaire

The first time I ever experienced Mahjong solitaire was when it came pre-loaded on a family computer. It wasn’t the kind of game I was used to, but I still found myself entranced by its tile-matching gameplay. I’ve not played it much since then, but I’ve been pairing all sorts of tiles and bubbles in the interim. As such, I approached Cubistry with an immediate sense of familiarity. Its world may be 3D, its appearance overwhelmingly vibrant, but deep down I knew what had to be done: these tiles needed to be destroyed.

For those of you who’ve never played, Mahjong solitaire is all about matching tiles that don the same patterns. If a tile is surrounded by others, then it has to be freed up before it can be used. Despite the game’s simple concept, it was (and is) an incredibly difficult game at times, prompting the player to consider their moves and always think ahead.

Cubistry is far less demanding in that sense, instead requiring you to spin a 3D structure made of tiles around and click on every match in sight. It doesn’t matter if a piece is surrounded by others, and the goal is to pair everything until the screen is empty. Your best completion time is always shown on the top left of the screen, which left me addicted to continually improving my record.

And that addictiveness is crucial, as there are no additional modes or levels in the game. You fire it up, receive a randomized square-shaped structure of cubes, and you go to town on disassembling it. Rinse, repeat. At the price of free, though, it’s not something I can hold against the game – especially with how well-made and enjoyable that single mode is, and how often I’ve found myself playing again in an effort to improve my time.

The game’s control scheme is simple and unobtrusive. To circle around the cube and view it at different angles, you can use the arrow keys, the WASD keys, or just move your cursor away from the structure. When you discover a pair, clicking on each piece results in their immediate removal. That’s all there is to it, and the ease of use made speed runs extra enjoyable. 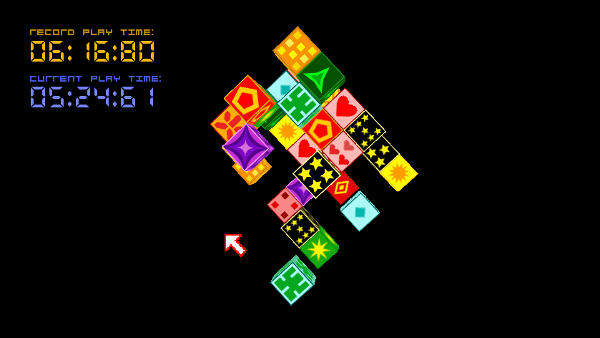 Okay, so Cubistry is not the most original game on the market. It plays very similar to Mahjongg Dimensions – itself an extension of the core Mahjong solitaire concept – and invites players to do something they’ve been doing for years on end: match, match, match. But it wears its inspirations well, and its colorful appearance and catchy soundtrack give the game a feel all its own. It’s well worth the meager space it takes up on your computer, and especially worth the low price of free.

Just get ready for the soundtrack to be lodged in your head for days.