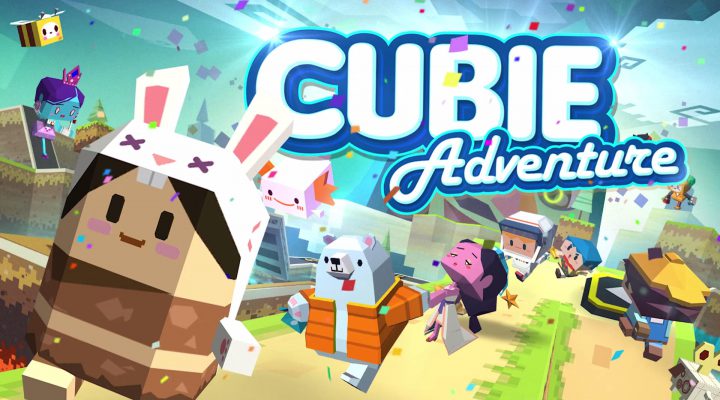 Fun, fast-paced auto-runner platforming with a twist in the form of buttons used to turn, pause, attack bosses, etc.

Tons of adorable characters and pets to unlock, each with a unique skill that helps within the game.

Three different game modes offer plenty of ways to play and goals to work toward.

Random zoom-outs make it difficult to judge your location and distance from obstacles.

Cubie Adventure is a fast-paced platformer that combines precision jumping, speedrunning, and a touch of rhythm gaming into an engrossing package designed for short one-minute sessions that will inevitably suck you in for much longer. Its world is an adorably bizarre mix of blocky characters and critters that feel so self-assured we were surprised they aren’t based on an existing series. Whether you’re conquering the 100 Adventure stages with Boy Scout Danny or overtaking other players in Racing mode with his brought-to-life stuffed polar bear Randy, there’s plenty to do, see, and unlock in this whimsical runner.

The story begins when Danny is sucked into Cubie World and tasked with chasing down the Pumpkin Head who stole the portal-opening Cubie Stone. Each stage of Adventure mode sees him following the tracks of the thief, which always lead to a boss fight with an animal enraged by the Stone’s power. The story really isn’t important: it’s just an excuse to travel through Cubie World and jump on a giant sheep’s noggin. 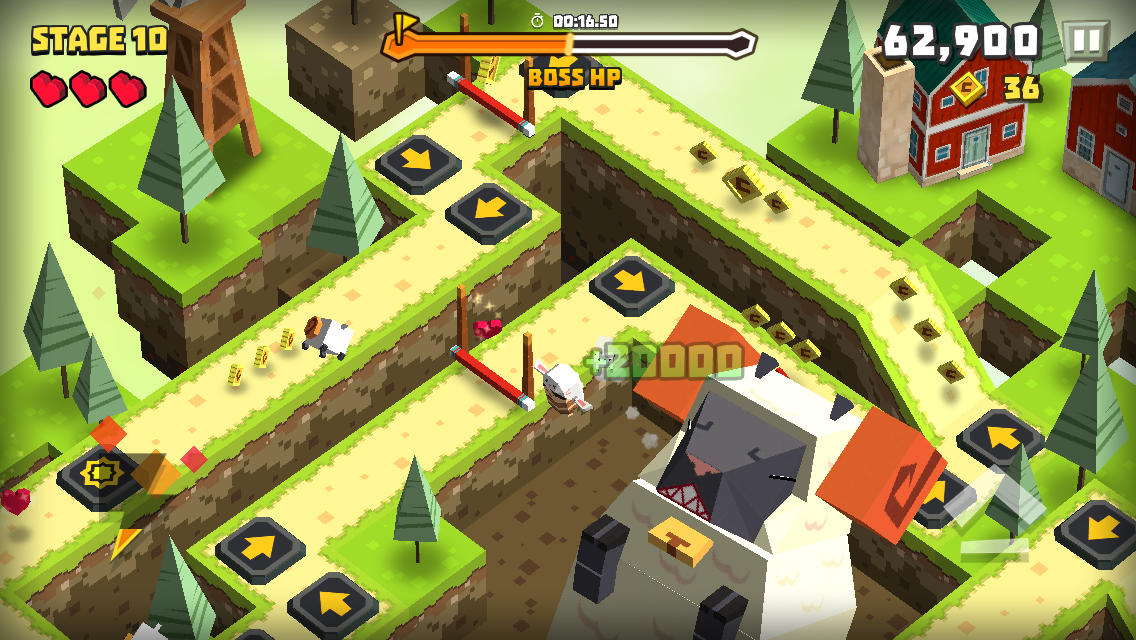 Those travels take place across individual stages made up of single-lane roads that wrap around themselves with tons of twists and turns. Your character auto-runs forward from the starting house and eventually ends up back at that point, coming from the opposite direction. In order to follow the zigzagging and circling road you’ll have to tap on directional action pads stationed on corners and at intersections. Tapping when your character is centered on a pad will award an “Awesome!” verdict, which increases your speed and keeps you centered on the road. Tapping at the edge of a pad results in a “Good” verdict, which keeps you running at the same pace but shifts you slightly to one edge of the path, while missing a pad entirely with your tap gives you a “Bad” and a speed reduction.

You almost always want to aim for “Awesome!” taps since completing a stage quickly rewards a bonus prize and chaining multiple Awesomes together will award combo points as well as fill your Fever gauge. Once full, activating Fever boosts your speed even further and makes you temporarily invincible to hazards. Those hazards are everywhere, ranging from spike strips to random height hurdle bars to giant pits. To avoid these dangers, you’ll need to jump and double-jump with precise timing, dodging damage but being careful not to pass over the action pad you need to hit to turn. While early stages will space out hazards and pads to allow brief reprieves between taps, later levels will have gauntlets of objects that require quick successions of turns and jumps with almost no time between them. Routes grow from fairly linear roads with action pads at the corners to multi-path mazes that require you to pass over one pad before tapping an arrow facing the other direction to turn around or actually bounce back and forth between opposing arrows while waiting for a moving bridge to return.

The game ramps up this difficulty gradually, however, and we didn’t really find ourselves struggling until the fifth world of Adventure mode. It helps that the different characters you can unlock by playing the random prize machine—both Cubies, the actual runners, and Cupets, the tiny companions that trail along behind them—offer different boosts and skills to make your runs a bit easier. Danny has a magnet skill that draws in nearby coins and power-ups without going out of your way to snag them while his stuffed bear, Randy, has a small percentage chance to ignore obstacles. Other powers range from speed and jump height increases to expanding the hit radius of action pads. Each character has five costume swaps that, as collected, increase the skill of each variation: for instance, Randy’s ignore chance is 7% when only he is unlocked, but discovering “Rock’N’Randy” will bump this up to 10% for both versions. This adds to the appeal of building your collection since you’re actually receiving tangible gameplay benefits from earning new characters.

Beyond the progressively difficult story mode, Cubie Adventure also offers Crazy and Racing challenges to provide some variety between stages. Crazy mode pits you against a series of four levels that must be completed without dying, or else you’re sent back to the first stage and have to retry from the beginning. Racing mode drops you in a stage alongside the ghosts of four other players and challenges you to beat their time, awarding prizes and rank increases for third place or above. All three modes use an energy-esque “key” system to let you play, with keys refilling over time as well as being earned through chests and achievements. The nice thing about Cubie Adventure’s energy system is that each mode uses its own set of keys, so if you run out of tries on Adventure, you can switch to Crazy or Racing while the other mode’s keys refill. We’ve yet to be stuck without anything to play after making it through half of Adventure mode, a few dozen races, and four Crazy Cubes. 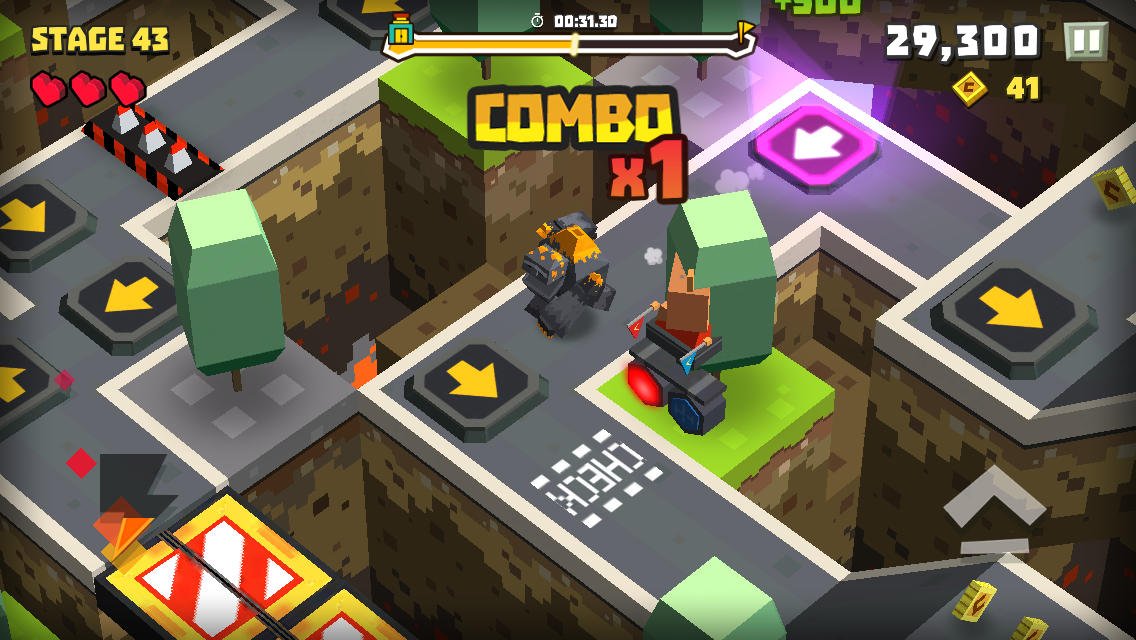 Yet Cubie Adventure has a few rough edges that make the game harder to play than it needs to be. One of these is specific to Racing mode: when an opponent passes you, their ghost transforms back into a whole character, making it extremely difficult to see what’s going on when multiple players are neck-and-neck. In every mode, the screen will randomly zoom in or out after you take damage or fall off a cliff, and some stages are automatically panned out simply because they need to show too many things at once. This makes it much harder to gauge distances when jumping between ledges or trying to tell how close you actually are to an upcoming obstacle. Some later levels’ difficulty is increased because of surprise elements that are almost impossible to plan for, such as an enemy springing out of a pit or a giant snowball falling from the sky. These hazards reward memorization after dying and restarting as opposed to quick reaction times and proper tapping, and they’re very frustrating the first time you encounter them. Cubie Adventure is at its best when it challenges you to make quick decisions and taps that are clear yet simply difficult to pull off; mistakes caused by poor camera angles or surprise attacks feel cheap and undeserved.

Thankfully, the majority of the stages and obstacles we’ve encountered strive for fair, fun layouts that prioritize player skill. Keys and boosters, like bonus heart cards, are doled out frequently enough that you’ll almost always have another try or helper not far away. The characters and Cupets are adorable and varied, their bonus talents that impact gameplay provide tangible reasons to keep trying to unlock them, and finding even rare Cubies is made easier by the option to purchase them directly with gems earned from Racing mode. The three different game modes, as well as the numerous challenges and achievements across them, offer tons of goals for completionists to strive for. And the gameplay in each is simply a fun, unique twist on auto-running platformers that is fast, fresh, and lovably hard to put down.

Surface: Game of Gods Review – Game within a Game