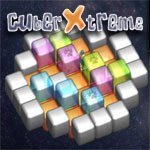 Gamers familiar with classic box-pushing games like Boxxle or BoxyBoy might offer little more than a cursory glance at CuberXtreme. After all, if you were to judge it from a handful of screenshots or a brief description you might think that CuberXtreme brings very little new to the genre. However a closer inspection reveals that CuberXtreme merely uses the box-pushing motion of those games as the starting block in a unique and fresh puzzle experience.

CuberXtreme places you in the shoes of a box pushing gentleman on a small isometric grid. A number of colored boxes also sit on this grid, and it's up to you to use the man to maneuver the boxes in a way that like colored boxes touch and disappear. Each of the 17 stages are completed once all of the colored blocks disappear.

Maneuvering the blocks isn't always as easy as it sounds. The challenge in CuberXtreme comes from figuring out how to move the blocks on the grid in such a way that you'll be able to make matches without sabotaging other matches you'll need to make later in the round. Pushing that blue block out of the way so you can match the green blocks might mean that blue block gets stuck in the corner, making the stage unfinishable. There's a good deal of strategy involved in getting through each of the stages. Thankfully you can always restart the stage as soon as you realize you've made a game-ending mistake.

Adding to the challenge are a variety of special blocks that spice up the gameplay. Puzzle pieces, for example, can only disappear when touching like colored puzzle pieces. Pet pieces will give you a special helper that can eliminate a block without making a match. Anchor pieces can't be moved whatsoever and can only disappear with a like-colored touch. Add in other variables like joker cubes and landscape barriers in the middle of the grid and you're presented with a tight puzzle package that never gets the chance to feel stale.

The difficulty ramps up at a pretty good pace, with each puzzle feeling genuinely more challenging than the last. By the time you reach the middle of the pack you'll be spending a ridiculous amount of time trying to figure out how to move one block without trapping another. The challenge may prove a little too daunting for some, as the difficulty that sets in by the half way point will prove a struggle for even the most seasoned of puzzle veterans.

As you'll need to complete one stage to unlock the next, its likely that no matter how enjoyable one finds the game, they'll likely reach a point where they have to walk away and admit defeat without seeing everything else the game has to offer. Opening up all the puzzles from the start would have been a great way to keep people playing, even if they did find a certain puzzle to tough to solve. It would have also been nice to see some sort of a level editor included as well. As it stands, CuberXtreme offers very little in terms of replay value. Once a puzzle is solved, there's no reason to go back. It's like knowing how a magician does his trick.

The difficulty and lack of replay value are the only real downsides to what's offered in CuberXtreme. The gameplay is accessible, the level design ingenious. The presentation is outstanding when compared to other web games, offering graphics and sound of a quality you'd likely expect to find in a downloadable PC title. Little visual touches really make the game shine, like the box pusher tapping his foot in time with the music. All in all, CuberXtreme is an exceptionally well-polished game that any puzzle fan should enjoy. Just be prepared to put your thinking cap on.