Some unique design ideas make this a nice break from your average tower defense game.

The graphics may be a little too simple for some tastes.

Cubemen offers a up a refreshing twist on tower defense

Duke vs. UNC, butter vs. margarine, Beatles vs. Stones…some matchups defy time and space, and are as much a part of our culture as good vs. evil. In video games you might not have ever realized it, but red has a real bone to pick with blue. The default in many multiplayer games is to make one side red and the other blue, so much so that gamers it has ingrained itself in our heads permanently that the two never shall mix. In Three Sprockets’ new tower defense/RTS hybrid Cubemen, we can add little men vs. little men to that list of classic battles.

Taking the title of the game seriously, during the tower defense portion of the game your towers are actually little cubed men. Deploy the various cubemen on any square of the board to fight off the approaching horde of enemies that are trying to take down your base. Though they can’t be upgraded, your cubemen don’t have to stay where you first placed them. Select one at any time and place it somewhere else as often as you want. As the two sides clash, enemies will start to push your cubemen out of the way until they’re destroyed. Trying to find the best placement for the different types of cubemen is the key to a successful match. It’s an interesting mechanic, though it takes some time to get used to.

The single player portion features 26 levels and is the most like a regular tower defense game. The levels themselves carry on the cube theme and feature various elevated portions, bridges and floating platforms. The elevated parts of paths can slightly slow down the approaching enemies, adding to the overall strategy. With a wide variety of designs there’s always something interesting to try out, though some of them are better suited to this style of play than others. 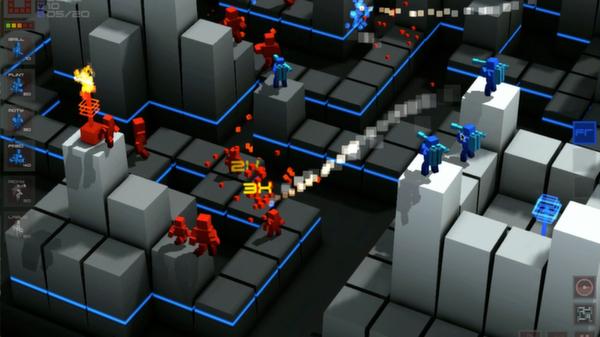 The main draw of the game seems to be the Skirmish mode where you’re pitted against either the AI or another human player. You essentially play two simultaneous games of tower defense until someone’s base is destroyed. There are 20 different levels specifically designed for this mode, so when combined with the single player content there’s plenty to keep you busy.

As might be expected with the voxel style, the graphics are pretty simple – almost to a fault. The levels sort of “float” on a plain dark grey background. There’s no texture to it, just plain ‘ol grey. There’s a little bit of shadowing and very sparse traces of color overall, ensuring that you won’t see Cubemen on anyone’s list of “best graphics” at the end of the year. The good thing is that it works for the premise, and runs like a dream on any machine.

The team at Three Sprockets have built a pretty decent tower defense hybrid. The element of “living towers” that can be moved around constantly makes things interesting, even if the look of the game is kinda dull. Still, with a budget price, Cubemen is something that’s worth picking up if you find yourself in the throes of needing a tower defense fix.