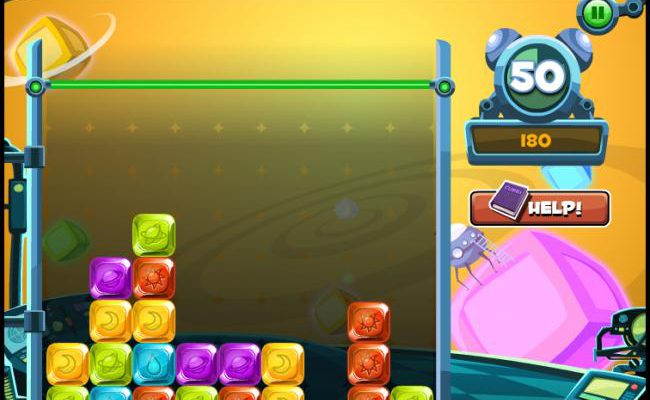 Puzzle games that can be played in short spurts of time are often ideal in casual or social gaming platforms such as Facebook. Cube Galaxy is one such title, offering players a seemingly familiar game style that comes with a handful of simple changes that make it play drastically differently. Credited to developer TribePlay, the app is centered completely around earning high scores. Surprisingly strategic, you can make use of power-ups and special boosts to out perform your friends within a span of 60 seconds.

Play works similarly to games like Collapse. When the clock starts, randomly colored cubes will begin falling from the sky and slowly fill up the game space. Should any breach the green bar at the top, you will fail and the game will be over. This isn’t too terribly hard to avoid though, as clicking on any set of three connecting cubes of the same color will remove them from play and score points. The idea is to score the most amount of points possible in one minute. 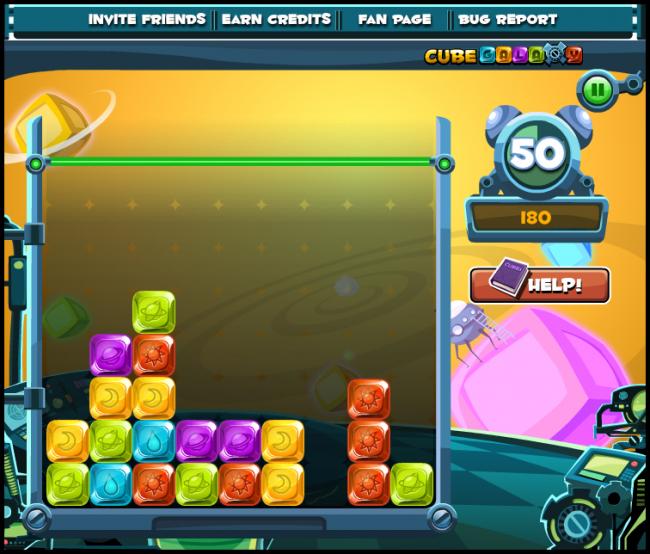 This in and of itself is not terribly unique, but Cube Galaxy also throws in the prospect of cube swapping. By clicking on any cube, it can be swapped with any other by clicking that other. It can even be “swapped” with an empty space. This isn’t so much about making it easier to avoid failure, but to allow you to create bigger sets of same-colored cubes to remove. And bigger sets are worth more points. This adds an extra level of strategy as, in order to be effective, you must wait for more of the game space to fill up. However, the risk of failure becomes greater as you are not removing the smaller groups of cubes (not to mention that time is ticking away). It comes down to a choice of trying to remove many smaller groups or waiting to remove larger ones.

With the completion of each game, you will also receive experience toward new profile levels. As you increase your level in Cube Galaxy, new perks will become available that can further increase your high scoring potential. These include point multipliers, lightning strikes that remove all cubes of a selected color, time bonuses, and more. This also adds, moderately, to the social aspect of play as they can be both gifted and purchased (before a game starts, they can be purchased and up to three activated) with coins earned from each play through. Once used, they will randomly fall into the play field in the same way as cubes.

Upon leveling up, you can also unlock passively activated “Super Abilities.” These include the boosts of “Overdrive” and “Time Bonus.” The former compounds scoring as you remove groups of cubes quickly (and stays active so long as cubes are still being removed quickly), while the latter adds time to the clock depending on how many cubes you remove. Once again, strategy appears here. 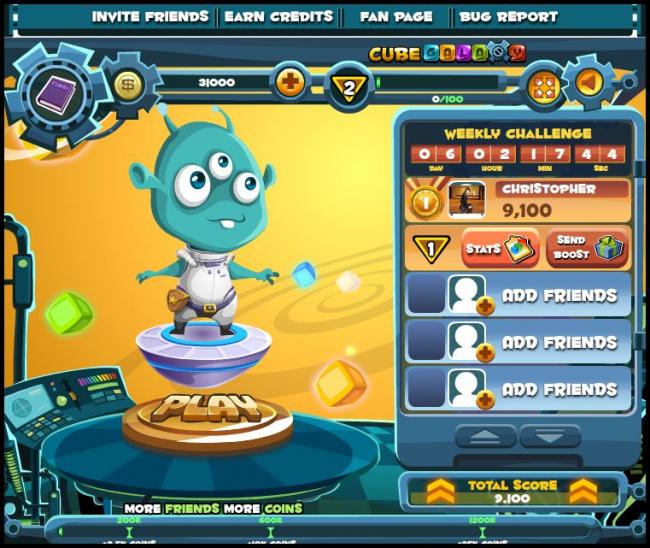 As for any other mechanics warranting mention, you will earn extra coins each match depending on how many friends are playing the game with you. And friends are needed to make the game truly fun. It is amusing the first handful of times you play it, but without the prospect of competing against other players, it loses its novelty fairly quickly.

Simple though Cube Galaxy may be, it is a nice addition to the social, puzzle-game genre. Well polished and visually appealing, the game takes a highly used game concept and adds a handful of new mechanics that actually change up the play style dramatically. Offering strategy and high score competitiveness, it is an app that can be gratifying to play so long as other friends join in. Cube Galaxy is an amusing puzzle game that is certainly worth a try, and since each game is only one minute, it’s easy to know if you will like or not, right away.