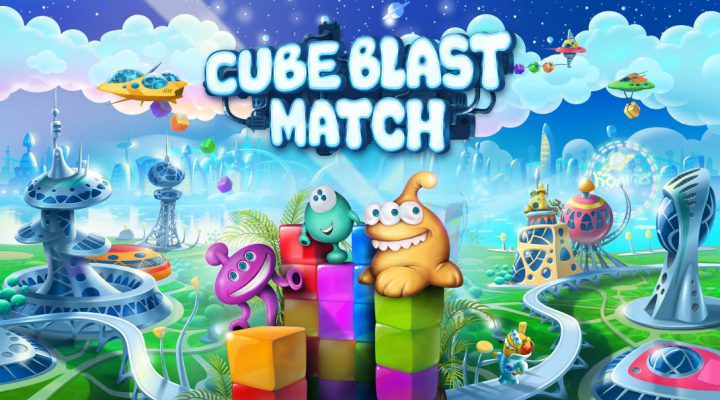 Gameplay can end up feeling too random

Cube Blast: Match doesn’t do itself any favours from the off. From its slightly unappealing aesthetics – aliens with braces and slightly too upbeat stock soundtrack – it fails to make a good first impression.

Especially when one of the first screens you see is the standard world map you’ve seen a million times on mobile.

Yes, Cube Blast: Match is a mobile port – and not one that gets anywhere near justifying its existence on Nintendo’s system.

The gameplay is simple but initially intriguing enough. You clear away cubes in a 3D four sided well by tapping those that are of the same colour and next to each other.

There are objectives to complete in each stage, and you have a set number of moves in each one.

The 3D element makes the game mildly interesting at first (as well as the occasional power up), but it also never feels hugely satisfying to play – there’s always the feeling that there’s a fair bit of random chance involved.

This is exacerbated by the game’s mobile origins, which aren’t hidden well. At all. After a while you’ll fail a stage and get asked if you want to use your in-game gems to continue.

There are other elements that means Cube Blast: Match never feels at home on the Switch too.

From the slightly unusual controls – you have to use the d-pad to move the cursor when playing docked, something we never completely got used to – to the lack of new modes this feels a very half-hearted port indeed.

We don’t know why a 2-player mode couldn’t be added in, or something to at least justify this port’s existence.

Especially when the price-tag is an eye-watering $19/€18/£16.19. Considering it’s free to download (admittedly with somewhat intrusive IAPs) on mobile we simply can’t understand this pricing.

If we were being cynical we’d say it was so that it can get generously discounted regularly to seem a more tempting prospect.

As it stands Cube Blast Match is not a broken game then, but far from a revolutionary one. If you have to play it we’d recommend looking into the mobile iteration first.

They’re Coming Review – You Should Shoot Them